Accessibility links
Doctors Struggle To Get Into Gaza Relief supplies are stacking up on Egypt's border with the Gaza Strip. But only a trickle of humanitarian and medical aid is getting through. Meanwhile, Palestinians eager to return home despite the carnage, have found themselves stranded.

Listen
Doctors Struggle To Get Into Gaza 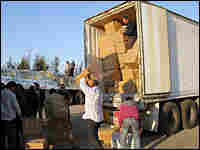 Volunteers at the Egypt-Gaza border at Rafah transfer medical supplies from an Egyptian truck to a Palestinian truck for delivery into Gaza. Peter Kenyon/NPR hide caption 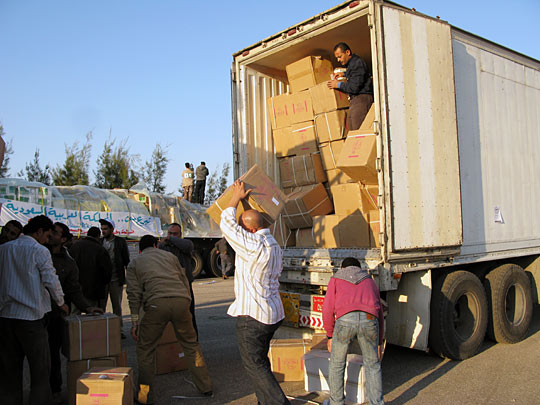 Volunteers at the Egypt-Gaza border at Rafah transfer medical supplies from an Egyptian truck to a Palestinian truck for delivery into Gaza.

Relief supplies are stacking up in Rafah on Egypt's border with the Gaza Strip. But only a trickle of humanitarian and medical aid is getting in so far. Also stranded are some Palestinians eager to return home despite the carnage caused by nine days of Israel's military offensive into the region.

Israeli mortar fire on Tuesday hit near a United Nations school in Gaza, killing dozens of civilians who had apparently taken shelter there, officials said.

Palestinian medical workers and witnesses said at least 40 people were dead, many of them children.

The attack occurred about 10 yards outside the school in northern Gaza. It was the second Israeli attack to strike a U.N. school within hours. In an airstrike earlier, three Palestinians were killed at another school run by the U.N. Relief and Works Agency.

In both cases, the schools had been used as shelters for people displaced by Israel's offensive against Hamas militants.

The Israeli military said its forces fired on the school in response to mortar fire from within the U.N. premises.

"Initial checks ... show that from inside the school mortars were fired at Israeli forces," a spokesman said. "In response, the forces fired a number of mortar rounds into the area."

As many as 600 people have been killed and 3,000 wounded in the 11-day operation, many of them civilians, according to the International Committee of the Red Cross.

The ICRC said people were trapped and unable to flee to areas of safety. The aid organization has appealed to Israel and Hamas fighters to refrain from targeting civilians and civilian infrastructure, which it said is prohibited under international law.

A top U.N. humanitarian official has also condemned the violence and demanded an investigation.

Israel has made no comment on the school attacks, but in the past it has accused Hamas — a militant group backed by Iran and Syria — of using schools, mosques and residential areas for cover.

The schools were hit on a day of heavy clashes on the outskirts of Gaza City between Israeli troops and Palestinian militants that left dozens of people dead.

Four Israeli soldiers were among those killed on Tuesday when they were hit by "friendly fire," the Associated Press reported. Also on Tuesday, a Hamas rocket hit a house in Gadera, east of Ashdod, far inside Israel. No one was seriously hurt.

U.S. Secretary of State Condoleezza Rice was to meet her Arab counterparts and consult with Palestinian President Mahmoud Abbas in New York, where she will also attend a U.N. Security Council meeting to try to work out a cease-fire agreement.

The Bush administration has stopped short of calling for an immediate cease-fire, arguing that a truce would need to end Hamas' ability to fire rockets from Gaza into Israel.

The White House has joined European leaders in calling for an end to arms smuggling into Gaza through through tunnels from Egypt.

British Prime Minister Gordon Brown said Tuesday he was "hopeful" that the basis on which an immediate cease-fire could be found.

German Chancellor Angela Merkel said she is open to international steps to stop the smuggling of weapons into Gaza, which she said was key to establishing a lasting cease-fire.

In a statement issued by her press office on Tuesday, Merkel said she had spoken to President Bush and Turkish Prime Minister Tayyip Erdogan about Gaza.

Israel launched its offensive on Dec. 27, saying it sought to halt repeated Palestinian rocket attacks on its southern towns. After a weeklong air campaign, Israeli ground forces invaded Gaza over the weekend. About 150 Palestinian civilians and hundreds more Hamas fighters have been killed in the conflict, according to U.N. figures. Nine Israelis have died since the operation began.

The rising civilian death toll and friendly fire incidents underscore the dangers of combat in the sprawling, densely populated, built-up areas of Gaza.

The death toll has drawn international condemnation and raised concerns of a looming humanitarian disaster. Many Gazans are without electricity or running water, thousands have been displaced from their homes and residents' food supplies are running low.

Israel says it won't stop the assault until its southern towns are freed of the threat of Palestinian rocket fire and it receives international guarantees that Hamas will not restock its weapons stockpile. Israel blames Hamas for the civilian casualties, saying the group intentionally seeks cover in crowded residential areas.

Israeli forces have cut the main Gaza highway in several places, splitting the territory in two along a north-south axis and surrounding Gaza City, which has a population of some 400,000 people.

Israel also has taken over high-rise buildings in Gaza City and destroyed dozens of smuggling tunnels — Hamas' main lifeline — along the Egyptian border.