Accessibility links
Guitarist Charlie Hunter: Serve The Music First Counting fans among lovers of straight-ahead jazz, the avant-garde and jam bands, Charlie Hunter has spent more than a decade defining his guitar style. In a session from Jazz24, Hunter unveils his new approach to technique that serves the music first. 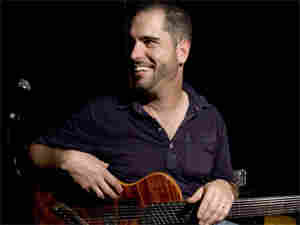 Guitarist Charlie Hunter appeals to a lot of music fans on a lot of different levels. His amazing technique and improvisational skills have earned praise from straight-ahead jazz critics and fans. His willingness to experiment musically is looked upon with great favor by devotees of the avant-garde. And his ability to dig into a big, nasty groove and then run away with it has made him a favorite with jam-band audiences.

No matter what sort of music he plays, his amazing technique has been Hunter's calling card since he started recording in the mid-1990s. Armed with a seven-string guitar, he possesses the unique ability to sound like at least two guitarists at once, as he seems to play bass lines, melody lines, chords and improvisational passages at the same time.

However, as he tells KPLU's Nick Francis in this session, he feels that he's taken technique as far as he can. Hunter jokes that, at a certain point in the recent past, he felt that the only thing he could do to outdo himself on stage would be to set himself on fire. Since he was understandably hesitant to take such a drastic step, he began to re-think the music he was playing and the reasons he wanted to play music in the first place.

His conclusion, as you'll hear, was that he'd spent enough of his career in the service of technique — and that it was now time to serve the music. The solo guitar pieces he plays in this interview clearly demonstrate the fruits of Hunter's new path.