Accessibility links
Lentils: A Legume For The Ages As a comforting, versatile food quick enough for weeknight cooking, lentils will keep you well fed all winter. But they're especially good to eat this time of year, as they're believed in many countries to ensure prosperity in the year to come.

Lentils: A Legume For The Ages

Lentils: A Legume For The Ages 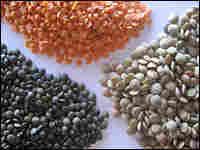 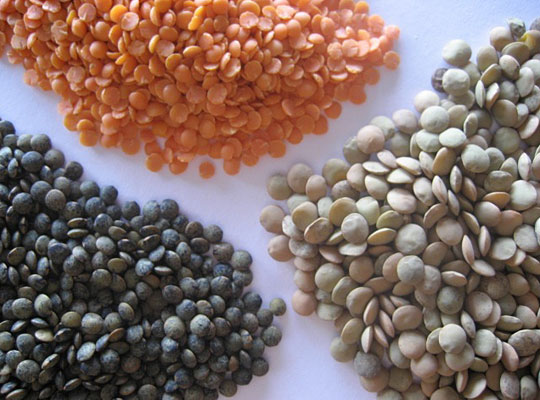 Get recipes for Brown Lentils With Chorizo And Orange Salsa, Wine-Braised French Lentils with Mustard-Glazed Salmon and Curried Red Lentil Soup With Raita.

Julie O'Hara is a freelance writer and recipe developer in Fort Lauderdale, Fla. She has written for National Geographic Traveler, Vegetarian Times and Self, and is a contributing editor for Shape magazine. You can read her food blog, A Mingling of Tastes, or visit her Web site, julieoharawriter.com.

As a comforting, versatile food quick enough for weeknight cooking, lentils will keep you well fed all winter. But they're especially good to eat this time of year. People in many countries eat lentils to ensure prosperity in the year to come. With 2009 still young, it can't hurt to try for riches of every sort — both earthly and spiritual. At the very least, you'll enjoy a rewarding meal.

Man has been eating tiny dried lentils practically since the beginning. Evidence of domesticated lentils dating to around 8000 B.C. has been found on the banks of the Euphrates River in what is now northern Syria.

By 6000 B.C., lentils had reached Greece, where the legumes were regarded as poor man's food. The opposite was true in Egypt, where remains of lentils were found in the royal tombs at Thebes dating to 2400 B.C. A second-century fresco illustrates the preparation of lentil soup.

Along with the Egyptians, the ancient Romans and Hebrews commonly ate lentils, which are mentioned several times in the Bible — most notably in the Genesis story of brothers Jacob and Esau. Esau, the firstborn, sells his birthright to Jacob for some lentil stew.

Lentils remain a staple in Middle Eastern and Indian diets, and are popular in cuisines throughout the world.

As a superfood, they are rich in protein — without the fat or cholesterol of animal sources — and provide B vitamins, magnesium, iron and zinc. In fact, lentils have the second highest protein content of all legumes, after soybeans. Because they are so high in protein, lentils are often a meat substitute in vegetarian diets. Pair them with a whole grain, such as brown rice, and you have a complete vegetarian protein source, meaning all the essential amino acids are present.

The soluble fiber in lentils helps lower cholesterol and may benefit those at risk for heart disease and diabetes. Lentils are also an excellent source of folate, a vitamin that helps the body build new cells. It is an especially important nutrient for women who are either pregnant or planning to become pregnant.

In India, where roughly half of the world's lentils are consumed, cultivation dates back to 2500 B.C. Today, more than 50 different varieties are grown. Nearly every traditional Indian meal includes at least one lentil dish, and they are an important source of nutrients for millions of vegetarians on the subcontinent.

Indian cooks buy lentils hulled and split in order to make dal. This highly spiced sauce or stew is served with rice or flatbread. I pair red lentils, which are sold hulled and split, with Indian spices and potatoes for a dal-inspired soup. They soften and break down almost instantly, so it's only necessary to simmer until the potatoes become tender. Often derided as "mushy," red lentils are ideal for turning soups thick and creamy.

From the Near East, lentils eventually reached Western Europe. Grown in southern France, lentilles du Puy with round green seeds and mottled dark-green hulls became a favored ingredient in French bistro cuisine. They hold their shape during cooking more than other lentil varieties. Braised in red wine with diced vegetables and herbs, the lentils are at once lush and earthy. They make a striking match for roasted salmon glazed with grainy mustard and honey.

Lentils were introduced to the Americas by Spanish and Portuguese explorers in the early 16th century. They did not gain a foothold in American cuisine, however, until World War II, when lentils were promoted as an alternative to meat, thanks to their low cost, wide availability and nutritional quality.

Lentils are as good for the environment as they are for our health. Nitrogen-producing bacteria grow naturally at the roots, enriching the soil.

Though lentils are perfect for relaxed home cooking, it's important to note the different cooking times and textures of the various lentil varieties. Red lentils are the fastest, and firm types such as French and Spanish lentils (called pardina) require more time to soften.

If lentils have been stored longer than a year, they will be drier and will take longer to cook than a fresher batch. Follow your recipe's cooking time, but taste as you go to avoid lentils that are too firm or too mushy. Do not mix newly purchased lentils with the ones you've had in the pantry for a while. The stored lentils are likely to be drier, resulting in uneven cooking. Lentils do not require pre-soaking, but another rule of legume cooking does apply: Salt and acidic ingredients (such as vinegar and lemon) toughen their skins, so wait until lentils are tender before adding them.

Many lentil recipes, as well as package directions, advise you to "pick over" the lentils in search of small rocks and debris. This sounds daunting (and vaguely alarming), but it is quick work. For a fast examination, I pour my lentils into a measuring cup very slowly in order to catch any unsavory bits. To be even more thorough, spread the lentils out on a light surface and look them over until you are satisfied. Do a quick rinse in a colander, and quality control is complete.

Then, start any lentil dish by frying up sausage, bacon or, better yet, Spanish chorizo, and you have the makings of a deeply satisfying meal. Add a generous quantity of hearty greens, such as kale or collards, to create a one-pot dish. The combination of tender, earthy lentils and silky, subtle greens might help you empathize with Esau's unfortunate decision. 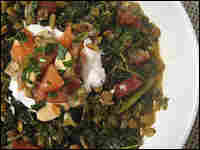 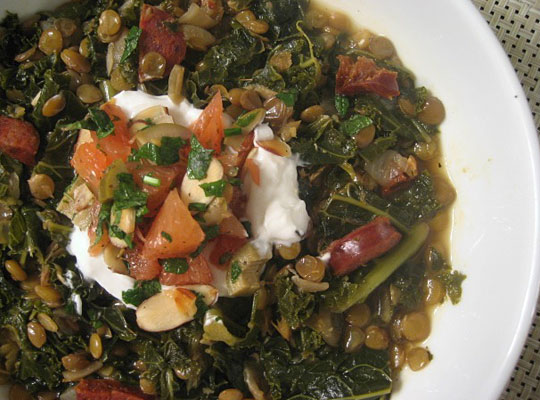 Though not the most beautiful, common brown lentils have a deep nutty flavor that can taste almost sweet. Try to get Spanish chorizo for this recipe. It comes cured, dried and ready to eat, like salami. It does not require refrigeration and is available in many large supermarkets. Bacon, along with Spanish paprika to mimic the chorizo seasoning, is an acceptable substitute.

Heat a large Dutch oven or saucepan over medium heat and coat with cooking spray. Add chorizo and cook until fat is rendered and chorizo begins to brown, about 2 minutes. Use a slotted spatula to transfer the chorizo to a paper towel. Discard all but 1 tablespoon of fat from the pan.

Add the onion, thyme and chili flakes to the pan, and cook until onion is lightly browned, about 6 minutes. Add the garlic and cook 1 minute. Add the broth, water, lentils and bay leaf, and bring to a simmer. Add the kale, cover and cook until lentils and kale are tender, 30 to 35 minutes, stirring occasionally. Add the chorizo and season with salt and pepper to taste.

Toast the almonds in a dry skillet (not nonstick, as these pans should not be used dry) over low heat until lightly browned, about 3 minutes, tossing often. In a small bowl, combine the almonds, orange, olives and herbs. Season with black pepper.

To serve, ladle lentils into bowls. Top with orange mixture and sour cream, if using. Sprinkle a few drops of vinegar over each bowl. 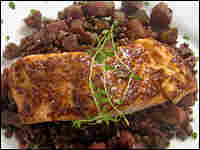 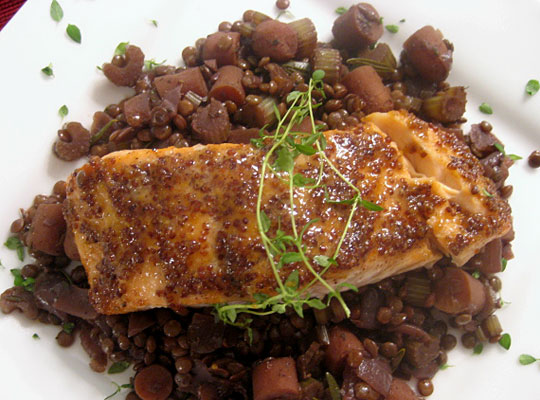 French green lentils, or lentilles du Puy, can be found in natural food stores, gourmet markets and some supermarkets. Brown lentils may be substituted. For the wine, choose a red that pairs well with salmon, like American pinot noir or French Cotes du Rhone.

Heat the oil in a large Dutch oven or saucepan on medium-high heat. Add the onion, carrots, celery, thyme, marjoram and rosemary. Cook until onion is soft and lightly browned, about 10 minutes. Add the garlic and cook 1 minute. Add the wine, water and lentils and bring to a simmer. Reduce heat to low, cover and simmer 45 to 50 minutes, or until lentils are tender (brown lentils will cook in less time), stirring occasionally. Season with salt and pepper to taste.

Place salmon fillets skin-side down on a foil-lined baking sheet. Season with salt and pepper.

In a small bowl, combine the mustard and honey and spread over fillets. Bake for 15 minutes, or until fish is opaque in the center. Separate the salmon flesh from the skin, discard skin and serve fillets over lentils. Garnish with fresh thyme if desired. 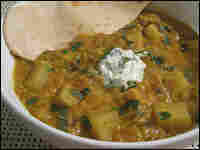 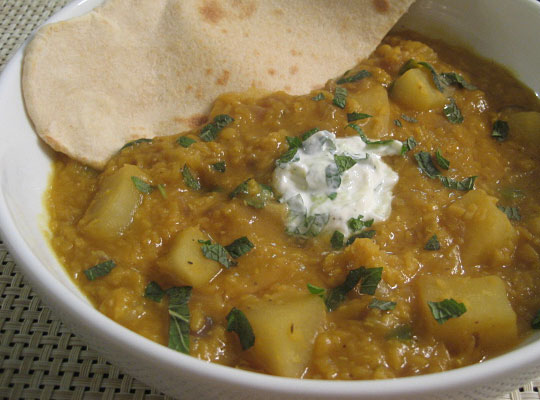 Raita is an Indian yogurt salad, often used as a cooling condiment with fiery dishes. This simple version is a refreshing counterpoint to the warming yet mild spices in the soup. Serve with store-bought naan or other flat bread.

Grate the cucumber on the large holes of a box grater. Place in a fine mesh strainer and press to extract as much water as possible. Let it sit in the strainer to drain while you start the soup.

Heat the oil in a large Dutch oven or saucepan over medium heat. Add the onion, jalapeno and cumin seeds. Cook until onion is lightly browned, about 6 minutes. Add the ginger, garlic, curry powder, coriander and turmeric and cook 1 minute. Add the potatoes and stir to coat with spices. Add the broth, water and lentils. Bring to a simmer, reduce heat to low, and cook until potatoes are tender and soup is thickened, about 20 minutes. Add the lemon juice and season with salt and pepper.

Prepare the raita while the soup cooks: Press grated cucumber again to extract more water. In a small bowl, combine cucumber, all but 1 tablespoon of the mint and yogurt. Season with black pepper and a pinch of salt.

Ladle soup into bowls and serve with a dollop of raita. Garnish with remaining mint.