Accessibility links
Burris Gets The Senate Boot, Vows To Take Seat Roland Burris came to Washington, D.C., on Tuesday to take his seat as the junior senator from Illinois, but the Democratic leadership in the Senate kept him out. Despite getting shunned, Burris says the law is on his side.

Listen
Burris Gets The Senate Boot, Vows To Take Seat 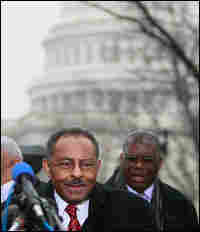 After Roland Burris left the Capitol building Tuesday morning, he said he was not seeking to "have any type of confrontation." Mark Wilson/Getty Images hide caption 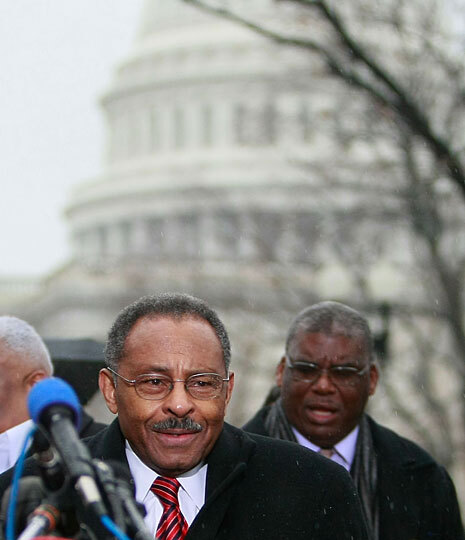 After Roland Burris left the Capitol building Tuesday morning, he said he was not seeking to "have any type of confrontation."

The 111th Congress was sworn in Tuesday with great ceremony on Capitol Hill, even if it was marred by the strange case of Illinois' Roland Burris.

Vice President Dick Cheney did the honors in the Senate. Neither Republican Sen. Norm Coleman nor Democrat Al Franken was sworn in because the result of the Senate race in Minnesota is being contested.

The senators who were sworn in were escorted by other senators, often a serving — or retired — colleague from the same state. Massachusetts Democrat Edward Kennedy, who had surgery this year to remove a brain tumor, did double duty escorting both his fellow Massachusetts senator, John Kerry, and Illinois Sen. Richard Durbin.

But for the time being, Durbin, who is No. 2 in the Senate Democratic leadership, has no junior colleague from Illinois. The seat vacated by President-elect Obama is also the subject of a dispute.

Before the clerk was through the B's — "Mr. Biden of Delaware, Mr. Chambliss of Georgia" — there was a noteworthy absence. The slot between them would have been for Burris, the Illinois politician appointed by Gov. Rod Blagojevich over the protests of all the Senate Democrats, who vowed not to seat him.

Shunned On The Hill

Shortly after 10 a.m. Tuesday morning, Burris set out from a Capitol Hill hotel and walked through a chilly drizzle to get to the Capitol building. He was surrounded by a troop of journalists a couple of dozen strong — a mobile scrum that multiplied in size by the time he reached his destination.

Burris was en route to hear firsthand the news he had learned Monday: The secretary of the Senate and the parliamentarian had looked at his certificate of appointment and found it lacking.

After his trip to the Capitol building, in what was now a more considerable rain, Burris told reporters what had happened inside.

Senate rules require a signature from both a governor — in this case Rod Blagojevich — and a secretary of state, in this case Illinois' Jesse White, who refused to sign Burris' certificate.

On the Senate floor, Democratic Majority Leader Harry Reid of Nevada acknowledged that Burris is already challenging that.

"A court case in Illinois is pending to determine whether Secretary of State Jesse White is obligated to sign this certification. We're awaiting that court decision," Reid said. "The Senate will proceed in a manner that is respectful to Mr. Burris, while ensuring that there is no cloud of doubt over the appointment to fill this seat."

Ensuring there is no cloud would be up to the Senate Rules Committee, and that could take weeks.

Burris himself is determined to be seated — and figures that he has the law on his side.

'I Negotiate By Taking My Seat'

In an interview at his hotel Monday night, Burris said he would tell Sen. Reid that he should be seated and that there is no room for negotiation. Burris said that even though Blagojevich was arrested and recorded talking about selling the Senate seat, he was not "a part of that" and should not be judged for it.

"Certainly, I'm gonna tell Sen. Reid that I'm the duly ... appointed United States senator under the Constitution and ... I should be seated," he said.

"And I think that Sen. Reid and my distinguished colleague Dick Durbin made a tremendous error in trying to make that type of blanket statement and prejudge, because they hadn't taken away the authority of governor, so how can they then just blanketly make that charge and indict everyone who the governor may appoint? I hope they are rethinking their position on that — to say that they would not accept anyone who is legally and constitutionally appointed.

"I negotiate by taking my seat, that's what's negotiable, recognizing that this is a legal appointment. It's legal. That's all we have to deal with. It's legal."

But there is talk on Capitol Hill of one possible, negotiated outcome: An agreement to seat Burris provided that the 71-year-old politician agrees to serve only until the seat comes up for election in two years.