Accessibility links
Tracing The Highs And Lows Of The Bush Presidency Two weeks from now, President Bush will be former President Bush, and what was once his agenda will become his record. The president suggests that history will judge him better than the current analysis. So what will he be remembered for?

Listen
Tracing The Highs And Lows Of The Bush Presidency

This is the second in a series examining President Bush's legacy. 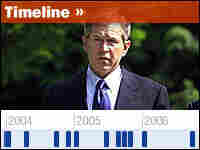 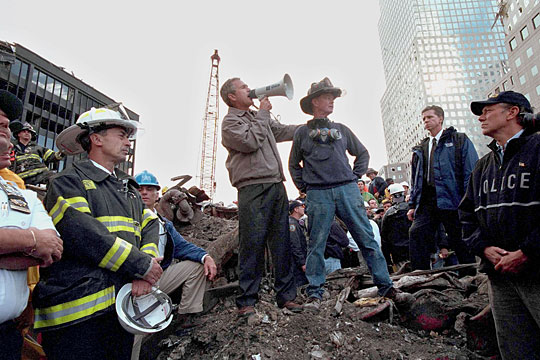 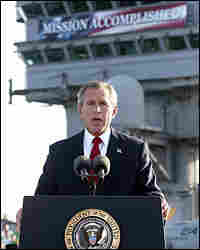 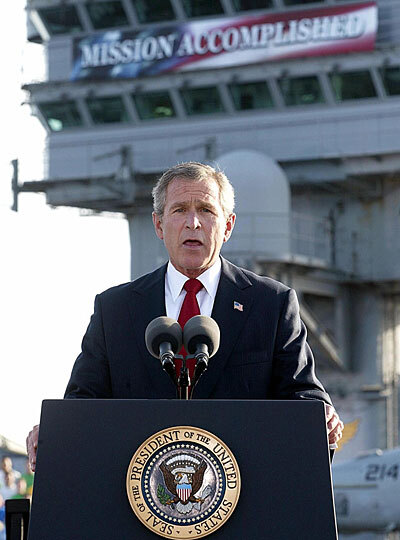 President Bush addresses the nation May 1, 2003, aboard the nuclear aircraft carrier USS Abraham Lincoln off the coast of California.

Two weeks from now, President Bush will be former President Bush, and what was once his agenda will become his record. The president suggests that history will judge him better than the current assessment — given the troubled economy and the wars in Iraq and Afghanistan. So what will be his legacy? What will he be remembered for?

A tour of some of the most iconic moments of the George W. Bush presidency starts with his inauguration on Jan. 20, 2001.

On the surface, it was all ritual and routine — the peaceful transfer of power masking the rancor over the 2000 Florida recount and the intervention of the Supreme Court in Bush's favor.

Still, once in office, he proceeded as though he had won a mandate. With narrow Republican majorities in Congress, he immediately won approval for education reforms known as No Child Left Behind and for a series of huge tax cuts.

But by that first summer, there was a growing sense of public indifference toward Bush. A Republican senator defected, costing his party control of that chamber. The president's job approval ratings began to slip.

Then came the Sept. 11 attacks. Bush sought to reassure the nation in a televised address, saying, "These acts of mass murder were intended to frighten our nation into chaos and retreat. But they have failed; our country is strong."

Three days later, he stood with rescue workers amid the rubble of ground zero. To the cheering crowd, he declared: "I can hear you. The rest of the world hears you. And the people who ... knocked these buildings down will hear all of us soon."

A week later came a speech to a joint session of Congress in which he brandished an aggressive foreign policy: "Every nation, in every region, now has a decision to make. Either you are with us, or you are with the terrorists."

Then Bush turned his attention to Iraq. There was no evidence of a connection between Saddam Hussein and the Sept. 11 attacks, but the administration repeatedly made the link. The president warned of Saddam's weapons of mass destruction — though none would ever be found.

Bush even included this line, known to be false at the time by the CIA, in his 2003 State of the Union address: "The British government has learned that Saddam Hussein recently sought significant quantities of uranium from Africa."

Six weeks later, the war in Iraq began. Baghdad fell. In May, President Bush landed in a fighter jet on the USS Abraham Lincoln off the coast of California. A giant banner proclaimed "Mission Accomplished."

"My fellow Americans: Major combat operations in Iraq have ended. In the battle of Iraq, the United States and our allies have prevailed," he said in a speech aboard the carrier.

Still, al-Qaida leader Osama bin Laden eluded capture. And it became clear that the mission in Iraq was far from over. The insurgency grew; violence and chaos ensued.

The president was undeterred in July 2003, when, in response to a reporter's question at a White House briefing, he responded: "There are some who feel like — that the conditions are such that they can attack us there. My answer is, bring them on. We've got the force necessary to deal with the security situation."

In 2004, the president campaigned for re-election on the need to fight terrorists to prevent another Sept. 11. He eked out a victory despite a weakening economy and growing discontent over Iraq. Once again, he claimed a mandate.

"I earned capital in the campaign, political capital, and now I intend to spend it. It is my style," he said on Election Day. And he used that capital to push for something big: an overhaul of the Social Security system, promoting changes allowing younger workers to divert some of their Social Security taxes into the stock market.

For months, the president pushed the idea, which got no traction in Congress or in the nation at large.

But in the summer of 2005, Bush also got his first chance to fill a vacancy on the Supreme Court. He nominated John Roberts, a highly regarded conservative. Bush described Roberts as having "profound respect for the rule of law and for the liberties guaranteed to every citizen," and said Roberts would "strictly apply the Constitution and laws, not legislate from the bench."

Roberts, 50 at the time, would become chief justice and was soon joined by Justice Samuel Alito, another conservative appointee — both of them lifetime appointments whose impact will long outlive the president's term.

Around the same time came one of the low points of the Bush presidency: Hurricane Katrina. New Orleans was devastated. The administration seemed completely unprepared, and one moment seemed to sum it all up — when the president lavished praise on Michael Brown, the embattled head of the Federal Emergency Management Agency: "Brownie, you're doing a heck of a job."

Through it all, the situation in Iraq continued to get worse. There was pressure on the president to fire Defense Secretary Donald Rumsfeld, one of the leading figures in his administration. In April 2006, the president defended his decision to stick with Rumsfeld: "I hear the voices, and I read the front page, and I know the speculation. But I'm the decider, and I decide what is best. And what's best is for Don Rumsfeld to remain as the secretary of defense."

The Race For A Replacement

Later that year came the midterm elections, when Democrats captured both the House and the Senate for the first time in a dozen years. Bush called it "a thumping."

It was a repudiation of the president, and a day after the election, Rumsfeld was out.

In his final two years, Bush was often overshadowed by the race to replace him. His approval ratings continued to drift down through the 30-point range. In the presidential primaries, Democratic candidates cast him as the villain, while Republican candidates distanced themselves. The president did not attend the 2008 Republican National Convention.

Then, this fall, another blow: an economic crisis more severe than any since the 1930s. The president stayed mostly in the background as appointees struggled to deal with the financial meltdown.

At year's end, Bush made his final visit to Baghdad as commander in chief. An Iraqi journalist hurled his shoes at the president in a gesture of defiance and protest. Bush managed to duck, then joked that the shoes were size 10. "Hey, that's what happens when you have a free society," he said. It was a final indignity, and a metaphor for the reversals in the president's second term.

The early reviews of Bush's presidency have not been kind. But will that verdict change, as the president's allies suggest? It has happened for other ex-presidents. Historians are pointing to one factor that could help it happen for Bush: the effectiveness of his successor, Barack Obama.