Accessibility links
New Congress Starts With Senate Seat Drama The pomp and circumstance of the opening of the 111th Congress was overshadowed Tuesday by the brouhaha over Illinois Senate appointee Roland Burris, along with Minnesota's contested Senate seat and the simmering controversy over Barack Obama's reported pick for CIA director. 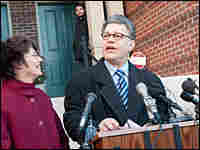 Joined by his wife, Franni, Al Franken speaks Monday in front of his home in Minneapolis after the recount in his bid for the U.S. Senate was certified. Republican incumbent Sen. Norm Coleman has challenged the recount in court. Jayme Halbritter/Getty Images hide caption 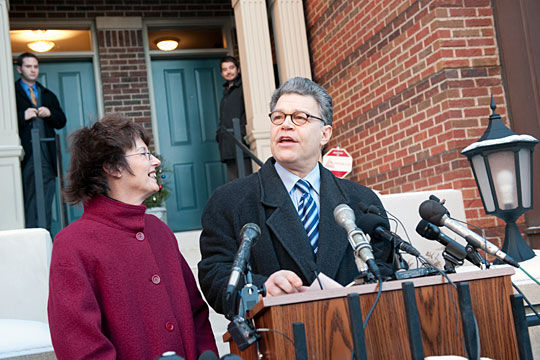 Joined by his wife, Franni, Al Franken speaks Monday in front of his home in Minneapolis after the recount in his bid for the U.S. Senate was certified. Republican incumbent Sen. Norm Coleman has challenged the recount in court. 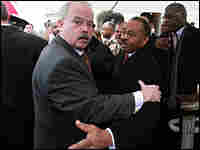 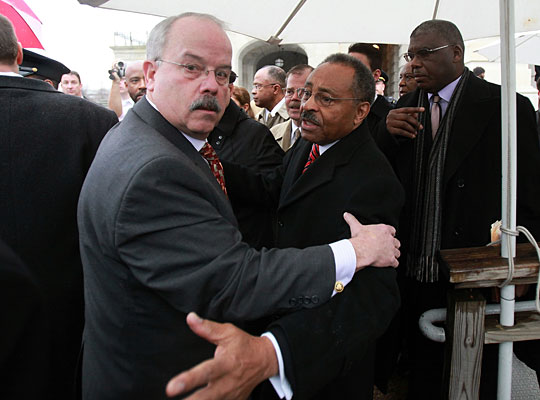 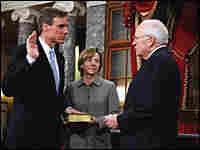 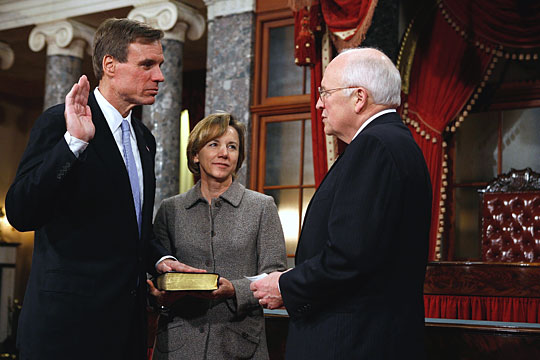 Roland Burris huddled under an umbrella in the cold morning rain, flanked by lawyers and hemmed in by a scrum of quote-hungry reporters and drenched photographers.

For the first time in many days, he had little to say. In fact, Burris, 71, a slight man of modest height, appeared disconcerted by the jostling cameras and shouted questions that followed him to a silver Honda minivan that spirited him away from Capitol Hill.

Spirited him away for now, anyway.

Moments earlier, Burris, as expected, had been turned away from the doors of the Senate where he — along with his lawyers — presented himself as the legally appointed Democratic successor to President-elect Barack Obama. His credentials, Burris was told, lacked the signature of the Illinois secretary of state, who has refused to certify the appointment.

It was a moment of real drama, and perhaps one that history may ultimately record as Senate Majority Leader Harry Reid's last stand against a senator-in-waiting appointed by defiant, scandal-tainted Democratic Illinois Gov. Rod Blagojevich.

"We know the law is on his side," says former Baltimore Mayor Kurt Schmoke, now dean of Howard University's law school and an adviser who was at Burris' side Tuesday. "We're hoping to get a prompt resolution before this degenerates into a debate about race."

But race has already become a theme of the Blagojevich-Burris-Reid standoff.

Reid, who has called Burris' appointment "tainted," came under increasing pressure Tuesday to seat the former Illinois comptroller. Support for Burris came from Reid's fellow Democrats — including members of the Congressional Black Caucus and elected leaders such as California Sen. Dianne Feinstein. Burris, the first African-American elected to statewide office in Illinois, would be the new Congress' only black senator.

Let's Not Forget Panetta And Franken

Democratic leaders had managed to avoid another threatened sideshow by deciding to delay seating Minnesota's new Sen.-elect Al Franken, whose razor-thin victory is being challenged in court by his opponent, GOP incumbent Sen. Norm Coleman.

There was no avoiding the Burris brouhaha, however — which, along with simmering controversy over Obama's reported choice of former Clinton administration official Leon Panetta as CIA director, overshadowed the pomp and circumstance of the opening of the 111th Congress.

Feinstein, chairwoman of the Senate Intelligence Committee, was angered that she had not been consulted about the Panetta pick. On her way to the Senate's swearing-in ceremony, she told reporters that Obama and Vice President-elect Joe Biden had "apologized profusely."

But she also reiterated her concern that Panetta lacks experience in the intelligence community, which she characterized as "vital to the mission" of the CIA.

"I'm going to ask some hard questions," she said before entering the Senate chamber.

Inside, comity and nostalgia prevailed as friends and family filled the galleries, and Vice President Dick Cheney delivered the oath of office to new and re-elected senators.

But even though the Burris issue had been momentarily defused, its effects could still be felt. The only African-American on the Senate floor was an aide to ailing, wheelchair-bound Democratic Sen. Robert Byrd of West Virginia.

And when Illinois Sen. Dick Durbin, the Senate's assistant majority leader, stepped up to take his oath, he had no Illinois colleague to join him. Obama was otherwise occupied, and Burris was barred. So Durbin was accompanied by a stooped but animated Sen. Edward Kennedy of Massachusetts, who moved slowly and with the help of a cane.

Perhaps sensing the tough road ahead — from reviving the economy and tackling health care to wars on two fronts — a quiet, almost pensive mood prevailed on the floor.

And Democrats, with new and significant majorities in both houses and a president working to build bipartisan support for his stimulus plan, are hoping to put one big distraction behind them. Wednesday morning, Burris and his lawyers will meet with Reid and Durbin in an effort to resolve the only-in-Illinois saga.