Accessibility links
Gut Reaction: Overeating Can Impair Body Function Though the holidays are over, they may have some lingering effects. Indulging even for a short period may cause changes in body functions that lead to more overeating. 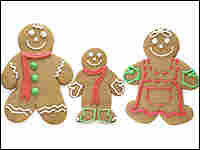 Short-term indulgences, like during the holidays, may trigger biological changes that lead to routine overeating. iStockphoto.com hide caption

A Partial Fast Retunes The Body

From juice-only diets to herbal tea cleanses, there are lots of fasting fads for sale, but experts say a 24-hour fast with water is the safest.

The holiday season is pretty much over. But is your body over the holiday season? For many people, indulging during these food-filled celebrations can set the stage for routine overeating.

The problem, some doctors and researchers say, is that overeating causes biological changes in the body that can lead to more food cravings and cause your stomach to send mixed signals about when it's actually full. As the years go by, those holiday pounds add up.

Dr. Rita Redberg, a cardiologist at the University of California at San Francisco, says each January she sees many patients lugging around an extra five pounds. Or more.

"We'll have a very earnest talk in October about weight loss," she says, "and then the visit in January after the holidays is generally a weight gain. And I see that commonly in my patients."

Year after year, those few holiday pounds can add up to 15, 20, even 30 pounds, making it all the more difficult to lose extra weight, Redberg says. "People get discouraged when they realize year after year they've gained weight."

In mice, studies of the biological clock — an innate mechanism that tells you when to sleep and when to eat — indicate that when they are overfed, their body clocks change and gear them toward more overeating.

"If mice eat a high-fat diet, they actually wake up during what is nighttime for them and eat," says Dr. Joe Bass, a Northwestern University endocrinologist and molecular biologist who has published numerous studies about the body clock and mice. "It would be as if you were waking up every night during holiday season and eating all the sweets in your refrigerator."

Bass found that among the mice who got fat, the weight gain resulted directly from food consumed during what would normally be their sleeping time. This suggests that people who eat less fat will sleep better, and they are not likely to engage in nighttime bingeing, he says.

Overeating "sets your body chemistry sort of into red alert," says Dr. Sasha Stiles, a family physician who specializes in obesity at Tufts Medical Center. "The kinds of hormone and metabolic processes that normally will try to metabolize food will go into overdrive to make sure they get rid of this huge food load," Stiles explains.

This means that much of what you eat will be stored as fat rather than converted into healthy byproducts.

Excess food can trigger an unfortunate cycle: The pancreas produces extra insulin to process the sugar load and remove it from the bloodstream. It doesn't stop producing insulin until the brain senses that blood sugar levels are safe. But by the time the brain stops insulin production, often too much sugar is removed. Low blood sugar can make you feel tired, dizzy, nauseous, even depressed — a condition often remedied by eating more sugar and more carbohydrates.

This feeling of low blood sugar sends many people after more carbohydrates, says Stiles, and they go for high-sugar foods to bring their blood sugar back up to normal and make them feel better.

This cycle of overeating can lead to a yo-yo effect.

If you consistently overeat, you'll trigger changes in your stomach, the doctor says. The neurological tissue at the top of the stomach, which signals the brain that the stomach is full, starts to malfunction.

"When you overeat time and time again, this electrical conduit pathway gets tired and it doesn't tell your brain that you're full anymore," says Stiles. "It may send abnormal signals and you may not even realize you're full."

If you drink lots of icy beverages with your food, the mixed messages to your body only worsen, she says. "When you drink cold liquids, your stomach will start contracting and it will massage the food that will again quickly leave [the] stomach to the rest of the gastrointestinal track."

This means your stomach will be empty sooner than normal, and you will be hungrier sooner.