Accessibility links
Obama Names Chief Performance Officer President-elect Barack Obama named Nancy Killefer as his chief performance officer. Her job will be to bring modern ideas of business efficiency to the White House. Obama also spoke of his plans to revive the economy without worsening the federal budget deficit.

President-elect Barack Obama named Nancy Killefer as his chief performance officer. Her job will be to bring modern ideas of business efficiency to the White House. Obama also spoke of his plans to revive the economy without worsening the federal budget deficit.

From NPR News, this is All Things Considered. I'm Melissa Block.

And I'm Michele Norris. We begin this hour with presidents plural. In a moment, we'll hear about the lunch meeting of all four living presidents and the president-elect. First, Mr. Obama announced another member of his administration today. It wasn't one of the highly anticipated announcements of CIA director or surgeon general. It was a new post - chief performance officer - to keep a close eye on spending. As NPR's Scott Horsley reports, that appointment came on the same day that the Congressional Budget Office predicted the deficit this year will balloon to nearly $1.2 trillion.

SCOTT HORSLEY: The gap between what the federal government spends and what it takes in is not so much a gap anymore, but a yawning chasm. The deficit, as a share of the overall economy, is forecast to be the biggest it's been since World War II. President-elect Obama today tried to underscore the seriousness of that budget shortfall, while at the same time taking pains to say it didn't happen on his watch.

P: We're going to be inheriting a trillion-plus-dollar deficit. And if we do nothing, then we will continue to see red ink as far as the eye can see.

HORSLEY: Mr. Obama warned that the deficit is likely to get even bigger in the short run as the government pours money into new roads and bridges and tax cuts in an effort to jump-start the economy. He said in these tough economic times, it's especially important that government dollars are spent wisely.

P: Our problem is not just a deficit of dollars. It's a deficit of accountability and a deficit of trust. So change and reform can't just be election-year slogans. They must become fundamental principles of government.

HORSLEY: As part of that effort, the president-elect named Nancy Killefer to be the federal government's first chief performance officer. Killefer has been a senior director at McKinsey Company, a big management-consulting firm. She also held a management role at the Treasury Department during the Clinton administration.

BLOCK: I know from my experience bringing about change in the private and public sectors that government has the capacity to deliver services more efficiently and effectively. I have seen it done.

HORSLEY: Mr. Obama says he'll be counting on Killefer and the rest of his budget team to identify cost savings to help offset some of the hundreds of billions of dollars he plans to invest in the economic-stimulus package. The president-elect has yet to specify a price tag for that package. But he said today he expects it to be at the high end of the range his advisers have cited - that is, about three-quarters of a trillion dollars. That would still fall short of what some economists have recommended. Mr. Obama says he's also looking for stimulus projects that will provide an immediate boost for the economy but won't create long-running obligations for the government.

P: Part of our stimulus package is going to involve revamping all federal buildings so that they're energy efficient. If we do that effectively then over the long term, we are going to save billions of dollars in energy costs for the federal government and for taxpayers.

HORSLEY: During his news conference, Mr. Obama refused to weigh in on the conflict in Gaza. He said the principle of one president at a time is especially critical when it comes to foreign policy.

P: The day that I take office, we are prepared to engage immediately in trying to deal with the situation there, and not only the short-term situation but building a process whereby we can achieve a more lasting peace in the region. But until I take office, it would be imprudent of me to start sending out signals that somehow, we are running foreign policy when I am not legally authorized to do so.

HORSLEY: The president-elect also steered clear of the fight over whether Roland Burris should occupy his old Senate seat after being appointed by Illinois' scandal-plagued governor. Mr. Obama called that a Senate matter.

P: I know Roland Burris. Obviously, he's from my home state. I think he's a fine public servant. If he gets seated, then I'm going to work with Roland Burris just like I work with all the other senators to make sure that the people of Illinois and the people of the country are served.

HORSLEY: Mr. Obama says part of his challenge will be to provide that service with greater efficiency and transparency. Scott Horsley, NPR News, Washington. 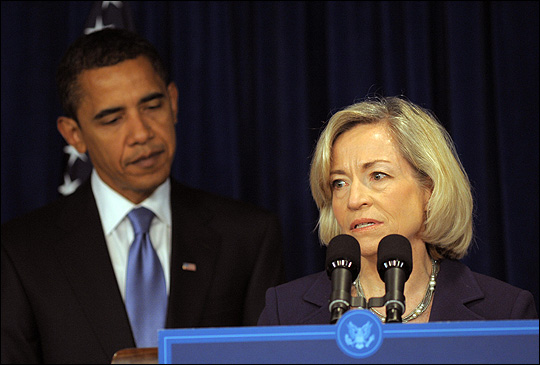 Nancy Killefer will help the White House address "a deficit of accountability and a deficit of trust," President-elect Obama said Wednesday.

Facing a potential record budget deficit of $1.2 trillion, President-elect Barack Obama said Wednesday that his advisers are balancing the need for a short-term stimulus while laying the groundwork for future economic growth.

At a news conference in Washington, D.C., Obama said the U.S. can't continue the pork-barrel spending that has led to the ballooning deficit. He said his economic stimulus plan will contain none of the pet projects that lawmakers traditionally add, and he is talking to congressional leaders about how to address entitlements. He said they may have a spending plan for entitlement programs — such as Social Security and Medicare — in February.

"Even in good times, Washington can't afford to continue these bad practices," he said. "The key is going to be, medium term and long term, how do we bend the curve so that we start getting these deficits down to a manageable level."

Obama, who returned to Washington this week ahead of the Jan. 20 inauguration ceremonies, has been on Capitol Hill this week pushing a plan to stimulate the U.S. economy and pull the country out of a deepening recession.

His plan includes new spending on infrastructure and energy projects, and he said Wednesday that he aims to include education and health care in his overall plan. In addition, the stimulus package is expected to include tax cuts of up to $300 billion for middle-income families; some businesses will also get tax relief in order to stimulate investment.

Obama also said his package would contain aid for states to help provide basic services and prevent layoffs in areas such as teaching and law enforcement.

The president-elect said he is still discussing the size of the package with congressional leaders, but it is expected to cost about $775 billion over two years and create or save up to 3 million jobs.

"I have confidence that not only are we going to be able to create jobs, but we're also going to be making a down payment on some critical areas," he said.

Obama said part of his overall strategy is to increase government efficiency. Toward that end, he announced that he has chosen former Treasury Department official Nancy Killefer to serve as the nation's first chief performance officer. He said she will be charged with working with government officials to eliminate waste.

For example, he said one of his goals is to make federal buildings across the country more energy efficient, a plan Killefer will oversee that is projected to save billions of dollars.

Obama's strategy of looking forward at eventual deficit reduction struck a chord with some Republican lawmakers.

"We cannot borrow and spend our way back to prosperity when were already running an annual deficit of more than $1 trillion," House Republican leader John Boehner of Ohio said in a statement. "I was pleased to hear the President-elect say ... that we need to stop just talking about our national debt and actively confront it."

Speaker Nancy Pelosi warned House Democrats that failure to pass the package by mid-February would lead to more job losses.

Pelosi said in prepared remarks that lawmakers should consider the cost of inaction, rather than focusing on the price tag alone. She said the payoff of the stimulus package would be in the creation of jobs.