Accessibility links
This Winter, More Cause For Broadway Discontent The recession has hit Broadway hard: Nine shows, including Young Frankenstein, closed this week, and four more have posted notices. Jeff Lunden talks to a veteran producer and a young investor to see how bad the outlook is.

Listen
This Winter, More Cause For Broadway Discontent 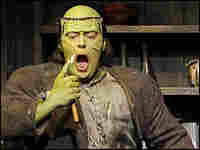 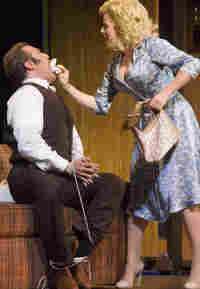 9 to 5, starring Marc Kudisch and Megan Hilty, is one of the new shows that will keep Broadway from being entirely bare this spring. Ryan Miller/Capture Imaging hide caption 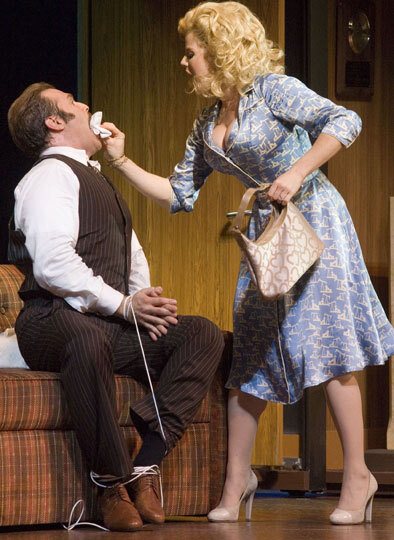 9 to 5, starring Marc Kudisch and Megan Hilty, is one of the new shows that will keep Broadway from being entirely bare this spring.

The economic downturn has Broadway on the ropes: On Jan. 3, an unprecedented nine shows wrapped up what had been open-ended runs. Four more have announced closing dates.

Some, like White Christmas, were holiday bookings. But many, like Young Frankenstein, Grease and Boeing-Boeing, closed long before anyone expected them to.

January and February are always bad months for the Broadway box office. But with the economic downturn, the math is more brutal this year. Many producers decided it would be better to close their shows than to continue sustaining losses.

So on Jan. 4, I got together with a veteran producer and a young investor to talk about the commercial theater's troubles.

'Replacing What's Left Town Will Not Be Simple'

First stop: 52nd Street, between Broadway and 8th Avenue. The sidewalk outside the Neil Simon Theatre is lined with crates and bins filled with discarded lumber. Stagehands scurry in and out of the big double doors leading from the pavement to the stage.

With me: Manny Azenberg, who's been producing plays on Broadway since The Lion in Winter in 1966. We're watching what's called "the takeout," when the scenery comes out of the theater. This is Hairspray.

"Or this was Hairspray," Azenberg says. "This is what it looks like. Used to be scenery."

There are scenes like this all over the theater district right now.

"And a few more next week and the following week," Azenberg says. "Probably coming to a total of somewhere between 16 and 20 since September. That's a lot."

Azenberg has seen a landscape like this just once before.

"There was a time, I think in the '70s, when there were only eight or nine shows on Broadway," he remembers. "And that was a crisis. And this will be a crisis, as well. And probably a more significant one, because the economics are much harsher — ticket prices are too high, costs are too great. And so replacing what has left town will not be simple."

Since those dark days in the early 1970s, Broadway's three dozen theaters have been consistently filled. And there are several productions lined up to open in theaters where shows have recently closed — revivals of West Side Story, Hair and Guys and Dolls, plus Dolly Parton's new musical version of 9 to 5 and quite a few straight plays.

But Azenberg says investment capital on Broadway is getting tight. It's a risky business, where only 1 out of 5 shows turns a profit.

"You can, ironically, say that the theater is a better investment than the stock market at the moment," Azenberg says.

"On the other hand, that cavalier money that was around to invest in theater has certainly diminished. There are major investors that I know — they used to put in a half a million dollars, so [now] they'll put in $100,000. That's going to affect a lot of things."

While those big investors are the ones who make Broadway hum, the business also depends on lots of smaller investors — gamblers who chip in from $10,000 to $25,000 for a piece of the Broadway dream.

The Irresistible Lure Of 'Being Part Of It All'

"There was a wonderful song in [title of show] that talks about 'being part of it all,' " Rubenstein says. "And I think that that's the motivation for a lot of smaller investors. This is their opportunity to be a part of that life and that glamour, and that key part of what makes New York New York."

Rubenstein has invested in 15 shows; most were flops, but a couple, like Hairspray, were hits. He says he's still getting pitches from producers, though lately he's been feeling the pinch.

"There's less capital for me to invest," he says. "That, for me and a lot of other investors constrains our ... vanity investments or our charitable contributions or our philanthropy. All of those things contract with the economy."

Still, as soon as he is able, Rubinstein will probably find himself giving in to the seductive pull of "being part of it all."