Accessibility links
Mosquito Duet Leads To Love While humans find the mosquito's buzz irritating, scientists have discovered that courting mosquitoes adjust the tone of their buzz to create a near-perfect duet. 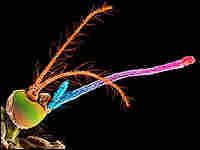 Click to watch a mosquito love pursuit that scientists captured on film in the lab. The video has been slowed down 133-fold.

Scientists at Cornell University have discovered that a species of mosquito has mastered the art of the serenade.

They found that Aedes aegypti mosquitoes adjust the frequency of the sound produced by their beating wings as potential mates near each other. The team's research appears in this week's issue of the journal Science.

The male mosquito's buzz, or flight tone, is normally about 600 cycles per second, or 600-Hz. The female's tone is about 400-Hz. In music, he's roughly a D, and she's about a G. So the male brings his tone into phase with the female's to create a near-perfect duet. Together, the two tones create what musicians call an overtone — a third, fainter tone at 1200-Hz. Only then will the mosquitoes mate.

Love On The Fly

Ron Hoy, a professor of neurobiology and behavior at Cornell University, says the researchers had to do some unusual things to the mosquitoes to study them.

First, the insects were anesthetized. "You make them a little bit chilly," Hoy says, "then they don't fly or walk around." Next, he and his colleagues applied a small amount of superglue to the backs of the test mosquitoes, then affixed them to a tiny tether and suspended them in the air.

Once the mosquitoes began to beat their wings and produce their gender-specific flight tones, the scientists moved the insects close to each other.

Most of the pairs varied their flight tones to create the overtone. Hoy speculates that the musical union could be a kind of sexual selection — potential mates unable to hear or produce the overtone might be deemed unfit for reproduction.

If Music Be The Food Of Love

What makes A. aegypi so unusual in the animal world is how precisely it modifies its tones.

Rex Cocroft is a behavioral biologist at the University of Missouri who has recorded the sounds made by numerous kinds of insects. He says many animals, from birds to katydids, use sound in mating behavior. This experiment showed something new.

"We think of insects as being masters of timing and rhythm and not so much as masters of pitch," Cocroft says.

There's a field of science called biomusicology, he says, that investigates the idea that what we like in music may derive from what we've heard in the natural world.

"For example, when people were writing early melodies like Gregorian chants," Cocroft says, "when you have a large jump up in frequency, then you tend to drop down stepwise, and people were asking, 'Well, do animals show similar kinds of rules?'"

If that sounds crazy, consider this: The interval between the male mosquito's tone and the female's is quite close to what musicians call a perfect fifth.

In fact, composers for centuries considered the interval of a fifth to be the most euphonious. So if mosquitoes have it right, all you need is a melody with an interval of a fifth and you'll be guaranteed romantic success. The composer of that romantic chestnut "Feelings" apparently figured that out: The first two notes are a perfect fifth.