Accessibility links
Sutherland: Glad To Be Back As Jack In '24' Actor Kiefer Sutherland doesn't take his dramatic series 24 too seriously. He feels it's an honor to play agent Jack Bauer, and thinks the show has done "amazingly well" getting people to talk.

Listen
Sutherland: Glad To Be Back As Jack In '24' 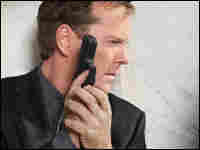 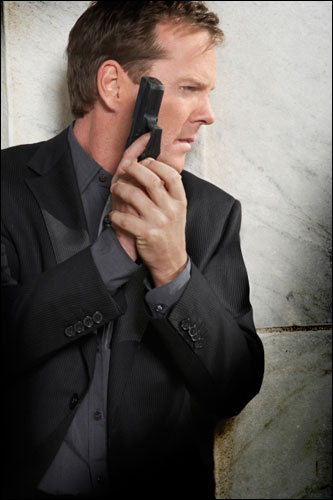 Jack Bauer, a federal agent in the fictional counterterrorism unit on the Fox drama series 24, has survived a nuclear explosion, a nerve gas attack and an abduction by the Chinese government. And he's nearly died. Twice.

For six seasons viewers have lived through a single 24-hour cycle in Bauer's life, played out in real time. On Sunday, Bauer will start his seventh day.

Actor Kiefer Sutherland, who plays the role of Jack Bauer, recently reflected on the popular series in a conversation with Ari Shapiro.

The first new episode features a hearing in the U.S. Senate about torture. Agent Bauer is being questioned on Capitol Hill about his use of torture on terrorism suspects. A real hearing with some Bush administration officials called to testify on the subject of torture took place only a few months ago. Did 24 imitate life?

"Well, I think one of the things that's kind of remarkable about 24, I mean, we ended up shooting, I think, the first eight episodes before the terrible events of Sept. 11," Sutherland said. "There are a lot of things in regards to 24 that, unfortunately, are tracking a lot of issues that are happening almost in real time. And so, yes, that's not surprising."

"With regards to the torture aspect, we were using it as a dramatic device to show you how important a situation was," he added. "Then, obviously, the events in Abu Ghraib, Guantanamo and everything else became a real focal point for us as a nation to look at what we're doing. And it only seems sensible that we as a show would do the same thing."

Sutherland says the new season — which was delayed in production by a year because of the Hollywood writers' strike — takes a hard look at his character's actions. "And Jack Bauer, as a character, has to really come to terms with a lot of things he does in the seventh season."

In the new season of 24, for example, agent Bauer offers that he should be held accountable for his actions.

"Jack Bauer is very disenfranchised with the government of the U.S.," Sutherland said." "And many of the things he has done, he was asked to do by that government. And so he has a great contempt for that government condemning him for his actions."

Later in the same scene, Sutherland says, his character articulates "a deep sense of regret. And he feels that he's outside of this blind ideology which kind of drove him for at least the first four seasons ... that we have stepped off course and that he himself has stepped off course."

Sutherland is not only the star of the program, but also one of its executive producers. When asked how much he thinks about the possible impact 24 has on the real world, Sutherland shared the belief that there's always been a distance in his own mind between the series and events in the news.

"Again, I've always considered 24 to be this really fantastical idea before it was viewed as something that was paralleling things that were happening in the world. And I've always tried to maintain the show on that level," he said.

Sutherland also had some thoughts about the reasons why the audience seems to like Jack Bauer despite some morally ambiguous actions.

"Because I think the world is ambiguous," he said. "I think Jack Bauer lives in the gray. It's muddy, it's dirty. And, you know, I always reference back to the first season, when I was attracted to him as a character. This is a guy who's responsible for protecting the first black president in the United States and taking on terrorists, and couldn't handle his 16-year-old daughter. I related to that," he said.

"Jack Bauer — I think one of the things that's interesting about this character is that there's no winning in a lot of the choices that he has to make. ... On a much smaller level, I think all of us feel like that about three or four times a day."

Jack Bauer has been a part of the national zeitgeist since the show made its debut. Is it possible that Americans are overanalyzing him?

Sutherland doesn't think it's his place to say.

"Certainly, as an actor it's been an honor to play him and to have people talk" about him, he says.

"What he's saying to me is: We have the capacity as actors and as writers and as filmmakers and TV show makers and theater performers to get people to talk. I think 24 has done that amazingly well."