Accessibility links
New Clocks, New Challenges As '24' Returns The seventh season of 24 premieres this Sunday. Critic David Bianculli assesses the four-hour, two-night return of counterterrorist Jack Bauer — who's got some new allies, and some new enemies. 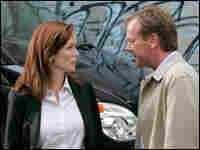 FBI agent Renee Walker (Annie Wersching) is none too fond of Jack Bauer (Kiefer Sutherland) and his tactics — but she ends up employing some in a pinch. Kelsey McNeal/Fox hide caption 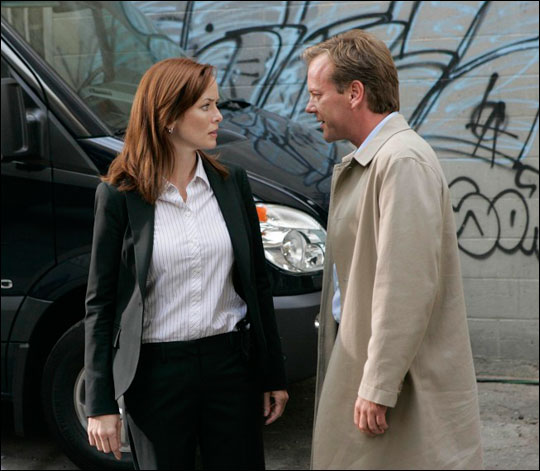 FBI agent Renee Walker (Annie Wersching) is none too fond of Jack Bauer (Kiefer Sutherland) and his tactics — but she ends up employing some in a pinch. 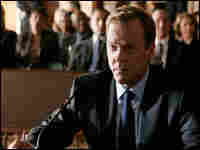 Sutherland's Jack Bauer is called to testify about his anti-terrorist work in the season's opener. Kelsey McNeal/Fox hide caption 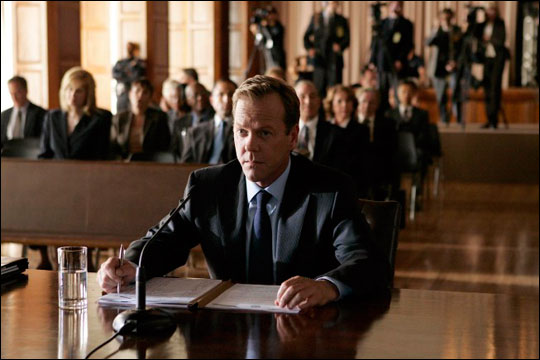 Sutherland's Jack Bauer is called to testify about his anti-terrorist work in the season's opener.

Time, and timing, always have been central components of the Fox series 24.

When it launched eight years ago, 24 was the first weekly series to present an entire season's dramatic narrative in real time — 24 episodes, 24 hours, one nonstop day in the life of Counter Terrorist Unit agent Jack Bauer.

It was such a risky scheduling move that before the show began, network executives wouldn't even commit to televising or producing all 24 episodes. If enough viewers didn't show up, the story would end early.

But viewers did show up — and they ate up the breathless pace, the narrative complexity and the occasional surprises and shocks. 24 not only survived and succeeded; it paved the way for other ambitious, novelistic TV series, most notably ABC's Lost.

That's the time element of 24. The timing element is that this series has never been disconnected from the era in which it's been televised.

When TV critics saw the pilot episode of 24 eight years ago, one of its early, shocking scenes was a shot of a female terrorist parachuting from a passenger plane just before a bomb she left behind blew it up in midair. Critics saw that scene in full, but you didn't. That's because weeks before the show premiered on Fox, the horrific events of 9/11 occurred — and Fox rightly trimmed back that scene considerably.

Ever since, the backdrop of current events, and the fear of global terrorism, has fed the drama of 24. The uses and abuses of the Patriot Act, and the definitions and employment of torture, also have been reflected in the series.

And it may be a two-way reflection. Midway through the show's run, representatives from West Point and the military claimed that some cadets and soldiers were being influenced by the show's widespread use of torture to gain information.

Eight years have passed, and just as America is about to shift administrations from George Bush to Barack Obama, 24 is in a different place, too. There's no more CTU — that top-secret anti-terrorist force has been disbanded — and as this new season begins, Kiefer Sutherland's Jack Bauer is testifying before Congress about his methods and practices. Suffice it to say his interrogator isn't friendly.

Early press coverage of this new season has suggested that the show's producers, some of whom are political conservatives, are reflecting their own reversal and repentance with this new plot line — but I don't think that's what's going on at all.

Yes, Jack's motives and methods are questioned, by almost everyone around him — but in the first four hours, I don't get a sense of either Jack or the show being that apologetic.

In fact, one of the best new characters introduced early on, an FBI agent played by Annie Wersching, is shown disapproving of Jack's usage of torture, then employing it herself when push comes to shove and information has to be extracted quickly.

The message of this season, I predict, will be very little of mea culpa and a lot more of the defiant "You need me" message of Jack Nicholson's career soldier in A Few Good Men.

Yet if 24 stubbornly stays behind the times in some respects, it continues to be ahead of the times in others. Eight years ago, when Bush was starting his first term, 24 presented a black man as president.

This year, with Barack Obama weeks away from his inauguration speech, 24 has a woman in the Oval Office — President Allison Taylor, played by Tony-winning Broadway actress Cherry Jones. If 24 proves equally predictive this time, that means we should have a female president in 2016. You heard it here first.

To tell too much more about what happens on 24, even in the opening minutes, would be to spoil much of the fun. Some old faces are back, and some new ones are added in — and after the first four hours, which will be televised Sunday and Monday, 24 establishes a bigger and better story line than it did in November's telemovie.

Jack Bauer is back. And speaking only as a TV critic who enjoys high-tension TV drama, I want him on that wall.