Accessibility links
Curious Film Score Mimics 'Benjamin Button' The score to The Curious Case of Benjamin Button works both backward and forward. Composer Alexandre Desplat drew his inspiration directly from the film, a story about a man who ages in reverse. 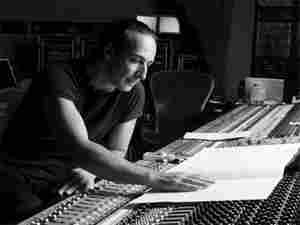 Alexandre Desplat has also scored the soundtracks to Girl With A Pearl Earring, The Queen and Syriana. Courtesy of the artist hide caption

Parisian composer Alexandre Desplat recently received a Golden Globe nomination for his score to the film The Curious Case of Benjamin Button. What makes Desplat's composition so novel and compelling is that it's a musical palindrome: Many of its themes play the same way forward as they do in reverse.

When composing the score, Desplat drew inspiration directly from the story of the film, in which main character Benjamin Button (Brad Pitt) is born an old man and goes through his life aging in reverse. Desplat says he wrote the music with subtlety in mind, preferring that it take a back seat to the movement of the picture.

"If I were to show off too much about my reverse thing," Desplat says, "it would be disconnected from the picture and the story, and we have to be really, completely overwhelmed by the story before everything."

For the composition itself, Desplat chose the sounds of New Orleans in the '30s and '40s, which also serves as the film's setting. He says he drew particular inspiration from Duke Ellington, which is evident in the romantic and sweeping arrangements of piano, strings and horns.

Desplat says the music should be the glue holding the movie together, while never distracting the audience from the film's movement and emotion.

"The goal is to make the music really a part of the skin of the film, and not be detached," he says.