Accessibility links
Illinois Impeaches Gov. Blagojevich The Illinois House has voted to impeach Governor Rod Blagojevich. We examine the impeachment proceedings and what happens next for the embattled governor.

The Illinois House has voted to impeach Governor Rod Blagojevich. We examine the impeachment proceedings and what happens next for the embattled governor.

From NPR News, it's Day to Day. The Illinois House has voted 114 to one to impeach Governor Rod Blagojevich. Blagojevich is facing allegations of attempting to sell the U.S. Senate seat left open by President-elect Barack Obama to the highest bidder. The governor held a press conference this afternoon responding to the vote.

Governor ROD BLAGOJEVICH (Democrat, Illinois): We're going to move forward, and I'm going to continue to fight every step of the way. Let me reassert to all of you once more that I am not guilty of any criminal wrongdoing, and I'm confident that at the end of the day, I will be properly exonerated.

COHEN: That was Rod Blagojevich speaking earlier this afternoon.

Joining us from the state capitol in Springfield is NPR's David Schaper. David, the vote, 114 to one, who was the one?

DAVID SCHAPER: Well, it's a Chicago Democrat, Milton Patterson, a state representative from the city of Chicago, who said that when he read the impeachment committee's report, he really wasn't comfortable voting against the governor because he has no firsthand knowledge of any of the evidence. And he said it was his own gut feeling that the governor should not be impeached at this point in time. A couple of others - one other member voted present, and a few other members of the Chicago delegation - Democrats who have a bit of a closer relationship to the governor - thought it might have been a little bit premature because he has not been convicted of any crimes, just accused of crimes in the federal courts thus far.

ADAMS: David, remind us; what do the articles of impeachment actually accuse Blagojevich of?

SCHAPER: The House alleges in its resolution to impeach the governor that he has betrayed the public trust; he has violated his oath of office; he's abused the authority of his office in putting his own personal interests to head of the state's interests. The case used much of the information in the criminal complaint filed by federal authorities against the governor at the time of his arrest last month that laid out many allegations of pay-to-play politics in Illinois, in which the governor is accused of trying to cash in on his official duties of state government, including allegedly trying to auction off to the highest bidder the Illinois U.S. Senate seat that was vacated by President-elect Barack Obama. But the case for impeachment goes far beyond those criminal charges. The totality of the evidence, the House report says, demonstrates an abuse of office of the highest magnitude. Chicago Democrat Barbara Flynn Currie, who chaired the special House impeachment committee to compile the evidence against the governor, made the case to her colleagues on the House floor.

State Representative BARBARA FLYNN CURRIE (Democrat, Chicago, Illinois): This governor tramples on the legislative prerogative. He breaks state and federal laws. In his own words, he expresses a willingness to barter state official acts and state taxpayer money for personal and political gain. This governor has violated his oath of office; this governor has breached the public trust; this governor must be impeached, and I urge your aye vote.

SCHAPER: Other members on the House floor compared it to a circus, a freak show and an embarrassment for the state of Illinois, and argued that the governor must be removed from office.

ADAMS: Well, the word "impeachment" means that the process now starts. There will be a trial in the Senate, in the State Senate there. When will that start?

SCHAPER: Well, the indication now from Senate leaders is that the trial would not begin until probably January 26th. The new Senate is being sworn in, a new legislature; both the House and the Senate will be sworn in next Wednesday. And after that time, they will adopt rules by which the committee will proceed. But because many Illinois lawmakers are going to Washington, D.C., for the inauguration of President-elect Obama the week following, they didn't want to have to start and stop the trial. So, they're not going to begin until after everybody returns on the 26th of January.

ADAMS: NPR's David Schaper talking with us from Springfield, Illinois. Thank you, David.

ADAMS: Day to Day continues in a moment. 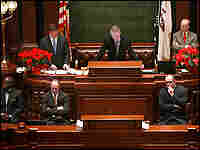 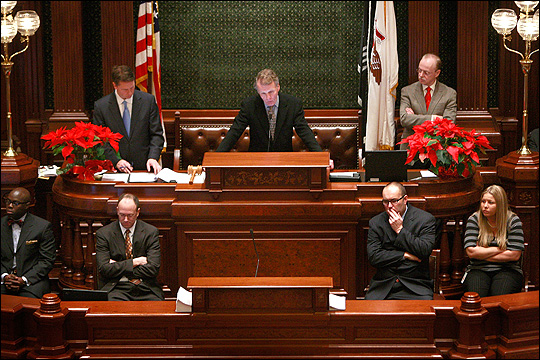