Accessibility links
After 160 Years, Fabled Yale Club Shuts Doors Mory's Temple Bar, a private club that has served Yalies, their guests and even presidents, and has hosted a cappella groups for almost 100 years, has nearly gone broke. The institution is in need of a loan from Yale or a wealthy alumnus in order to stay afloat. 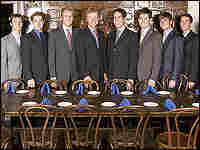 The Yale Whiffenpoofs of 2009 pose at the table they eat at every Monday night in Mory's Temple Bar. After 160 years in operation, Mory's will not reopen when classes resume next semester. Courtesy of the Whiffenpoofs hide caption

toggle caption
Courtesy of the Whiffenpoofs 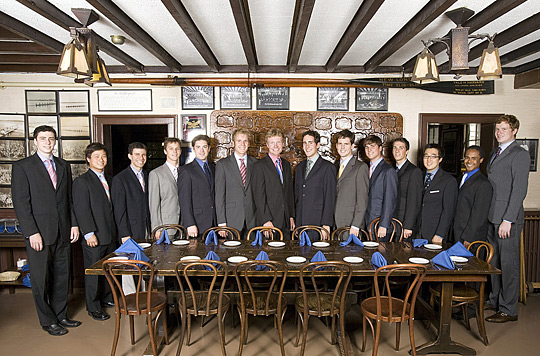 The Yale Whiffenpoofs of 2009 pose at the table they eat at every Monday night in Mory's Temple Bar. After 160 years in operation, Mory's will not reopen when classes resume next semester.

Courtesy of the Whiffenpoofs

The Yale SOBs Sing "Daddy Is A Yale Man" 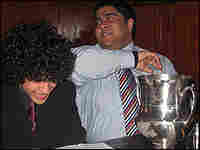 toggle caption
Courtesy of The Society of Orpheus and Bacchus 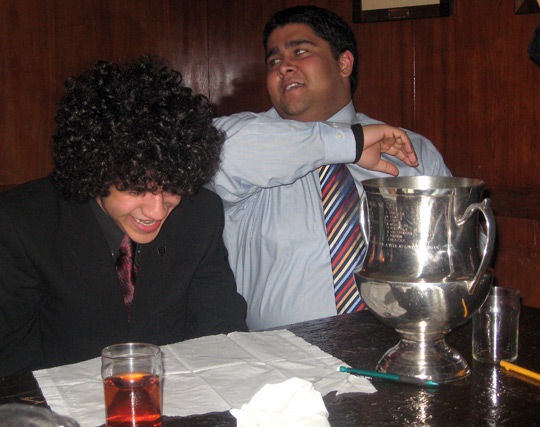 Robert Ramaswamy (left) and Saurish Bhattacharjee, members of The Society of Orpheus and Bacchus, with a recently finished cup in a private room at Mory's.

Courtesy of The Society of Orpheus and Bacchus 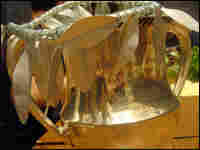 Singing at Mory's meant singing for cups — giant, silver, two-handled chalices filled with red or gold or green concoctions. Courtesy of The Society of Orpheus and Bacchus hide caption

toggle caption
Courtesy of The Society of Orpheus and Bacchus 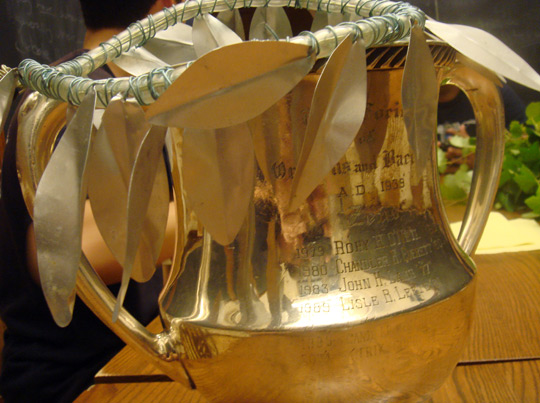 Courtesy of The Society of Orpheus and Bacchus

If you've heard of Mory's Temple Bar, then you're probably my grandparents' age, and you probably remember Rudy Vallee or Bing Crosby covering the Whiffenpoof Song. It starts off like this:

To the tables down at Mory's. To the place where Louie dwells. To the dear old Temple Bar we love so well.

But when Yale University students return from winter break on Monday, this 160-year-old tradition will be shuttered. Mory's, a private club in New Haven, Conn., for Yalies, their guests and sometimes presidents, has nearly gone broke. The institution is in need of a loan from Yale or a wealthy alumnus in order to stay afloat.

Jamie Warlick business manages the Yale Whiffenpoofs, the nation's oldest college a cappella group. He says they were founded at Mory's in 1909, and they've performed there every Monday during the school year since.

I wasn't a Whiffenpoof, but until I graduated in 2007, I was a member of The Society of Orpheus and Bacchus, or the SOBs, as the Mory's staff liked to call us. We sang there on Tuesday nights.

Singing at Mory's meant singing for cups — giant silver, two-handled chalices filled with red or gold or green concoctions. They're alcoholic, of course, and you gulp them down while your party serenades you, before passing them around the table. The person who finishes the cup has to spin it on his or her head to make sure every last drop has been drained.

"When you drink a cup, you not only imbibe the glory of the alcohol, but the glory of the spit of everyone else that you have been drinking this cup with," says Barry McMurtrey, Yale class of 1988. "It is a shared communion."

McMurtrey was an SOB and a Whiffenpoof, and he is — to make an understatement — an active alumnus. He estimates that since his freshman year in 1984, he has been to Mory's at least 800 times.

But McMurtrey's enthusiasm is rare. In an informal survey of 100 Yale seniors, most of the non-singers said they had been to Mory's at most once a semester, usually with a club or professor or a legacy roommate's dad.

Last week, the place was eerily quiet. Members of the operating board sat in the dark-stained dining room discussing ways to revive the club. Crew oars hung from the ceiling; black-and-white photos of sports captains on the wall. Chris Getman, the new president of Mory's Board of Governors, says that before any alumnus will bail them out, they need a business plan to make Mory's relevant to students again: by reducing membership fees, improving the food, altering the dress code and maybe even turning it into a full-fledged bar.

"A lot of people come here because of the ambiance of the place. It's like a museum — it's a very interesting place in which to eat," Getman says. "Then they don't come back once they've seen it. We've got to change that."

But while a place as old as Mory's can be rife with fond memories, it can also store some demons. A number of students, particularly women, say Mory's made them somewhat uncomfortable. One student said she disliked the "masculine nostalgia" of a club that didn't admit women until 1972. Noel Leon, a senior, sings at Mory's every other week with Whim 'n Rhythm, the Whiffenpoofs' female counterparts. She says the reason she enjoys Mory's is the same reason it tends to turn her off.

"Both stem from the same thing," Leon says. "They're both coming from the fact that Mory's is really old. And that specific fact carries some things forward that make it really awesome and also make it strange, potentially."

McMurtrey agrees that Mory's management could've done a much better job welcoming today's diverse student body. But he compares asking Yalies to go on without Mory's to asking Notre Dame students to go to services in a plain Presbyterian church.

"Something is lost. We can go through the rituals in other places, but somehow the soul will be missing," he says. "Or languishing to be in its home."

And until his dear old Temple Bar reopens, McMurtrey will spend Mondays and Tuesdays languishing a bit himself.