Accessibility links
New Mormon Temple: Sacred Or Secret? A new Mormon Temple in a Salt Lake City suburb is a public relations opportunity for the Church of Jesus Christ of Latter-day Saints. Hundreds of thousands of visitors are expected before the Draper Temple is dedicated for religious use in March — and then closed to all but worthy Mormons. 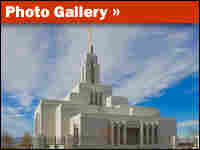 A new Mormon Temple in a Salt Lake City suburb is a public relations opportunity for the Church of Jesus Christ of Latter-day Saints. Hundreds of thousands of visitors are expected before the Draper Temple is dedicated for religious use in March, and then closed to all but worthy Mormons. Mormon leaders are using the opening to engage national reporters who sometimes write about the faith.

The invitations were a direct response to what Mormon Apostles Russell Ballard and Quentin Cook heard from reporters and editors when they traveled the country during fellow Mormon Mitt Romney's presidential campaign. Ballard and Cook were assuring journalists that the Mormon Church did not endorse or support any candidate, including Romney, and that it generally steered clear of politics.

They often heard something that disturbed them.

"We were astounded by people saying, 'You're secret. We don't know what's going on.'" Cook recalls. "They felt like there was a level of secrecy that we just don't think exists."

The notion of secrecy originates with Mormon Temples. They're reserved for the religion's most sacred practices and are only open to worthy Mormons. There are 129 Temples around the globe. They shouldn't be confused with the 18,000 chapels that are used for Sunday prayers and are open to all.

New Temples, like the one in Draper, Utah, open briefly for public tours before they are dedicated for religious purposes. Ballard and Cook decided to invite selected reporters for a private tour so they could attempt to dash notions of secrecy and explain more about the fundamentals of their faith.

The invitation also comes in the wake of criticism of the church for its involvement in the passage of Proposition 8, the ballot measure in California that banned gay marriage.

'Very Best Materials' For The House Of The Lord

The Temple tour began in an ornate lobby, where worthy Mormons present a laminated card with a bar code known as a Temple Recommend. It is issued by religious leaders who question the faithful about their moral and ethical behavior, adherence to Mormon doctrine and payment of tithes.

The lobby is ornate, like the rest of the building, which has exterior walls made with white Chinese granite, floors paved with limestone mined in France, windows filled with pastel stained glass, ceilings hung with crystal chandeliers, and doors, paneling, cabinets and trim carved from Makore wood from the west coast of central Africa.

Ballard does not apologize for the lavish structure or furnishings.

"From the beginning of the creation of Temples or special places of worship from the old testament days ... the very best materials ... were used to build the house of the Lord," Ballard says. "Consequently, we find the very best materials that we can find to build the house of the Lord because it will become His house when it is dedicated. It will be turned over to Him."

Ballard quickly adds that the church also does provide humanitarian services "... and all those other things He's asked us to do."

Our next stop on the tour is the Baptistery, a granite baptismal font the size of a hot tub that sits on a dozen white fiberglass oxen.

"The purpose of this is to provide proxy baptisms for those who are deceased," Cook interjects. "The savior said that everybody had to be baptized to enter into the kingdom of heaven."

Proxy baptism is as fundamental to Mormons as it is controversial to non-Mormons. The practice stems from the belief that Christianity went astray after Christ, and that the Mormon faith is Christianity restored. Baptisms conducted since essentially don't count. So Mormons are out to baptize those who didn't have these restored baptisms, and that has included deceased presidents, scientists, entertainers and victims of the holocaust. Some see this as insulting, especially for those who died for their faith, but Mormons believe the dead can reject the attempt.

"This baptism is not binding on them unless they accept it," Cook explains. "They're given the opportunity. So, we consider this a great effort of love."

Other rooms in the Temple serve to bolster faith and instruct Mormons in the intricacies of their religion. Some rooms are covered with painted murals. One depicts jagged and snow-covered mountains, with an eagle in flight, streams gushing through meadows, deer and elk grazing, and scattered pines and aspen. Pre-produced videos guide the faithful in religious "ordinances" that Mormons believe are too sacred to disclose.

The "Sealing Room" facilitates another practice fundamental to Mormons. Newlyweds kneel at a plush altar at the center of the room and are "sealed" or married to each other for eternity. This is not the "'til death do us part" arrangement of conventional marriage.

It is "for all time and eternity," as Ballard puts it. "And the families are to be together forever." It is "not just an earthly matter," he adds.

That sense of eternity is symbolized by two massive mirrors on opposite walls. Couples look in them and see cascading reflections that seem infinite.

Eternal marriage for Mormons always involves a man and a woman. "That's exactly as God declared it," Ballard says. "Because only between a man and a woman can children be born. And children are inheritance of the Lord."

Mormons believe that birth brings "spirit babies" from a pre-life existence into this life. This is doctrine that prompts Mormons to oppose gay marriage.

The Sealing Room is sacred but not too sacred for a political question. Is there room in Mormon theology for gay partners, shared health and death benefits and protection from discrimination?

"There is some very careful study, very careful evaluation being made, as to what would be appropriate and what isn't doctrinally," Ballard answers. "But if anything interferes with the basic fundamental principle of marriage being between man and a woman, doctrinally we're locked in. We don't have the capacity to call upon God and tell him to change his mind, that he made a mistake."

Peering Into The 'Presence Of God'

Our final stop on the tour is a room too sacred for questions, I'm told, so we stand outside and peer in. It's called the Celestial Room. Ballard describes it as "like walking in, as close as we know how to depict it, into the presence of God."

Awash in light and about three stories high, the Celestial Room has the biggest chandelier and stained glass windows, vases with floral arrangements and plush couches and chairs for contemplation.

"This is the 129th Temple," Ballard notes. And Mormons invite reporters and other visitors inside "so that there is no question that there isn't something secret going on. But then once it's dedicated, because it's sacred, not because it's secret, it's closed." Except to worthy Mormons.

There are still some secrets. Mormon officials won't disclose the cost of the building of any Temple. "That information is not available to the public," a spokeswoman responded when asked to provide the costs.