Accessibility links
2009 Food Trends: A Side Dish Of Recession In light of the national economic crisis, budget-conscious trends will dominate the food scene this year, says NPR's Bonny Wolf. Restaurants will offer lower prices, smaller plates and less pretension. And home cooking will be back, along with comfort foods like spaghetti and meatballs.

Listen
2009 Food Trends: A Side Dish Of Recession 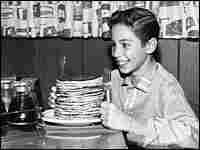 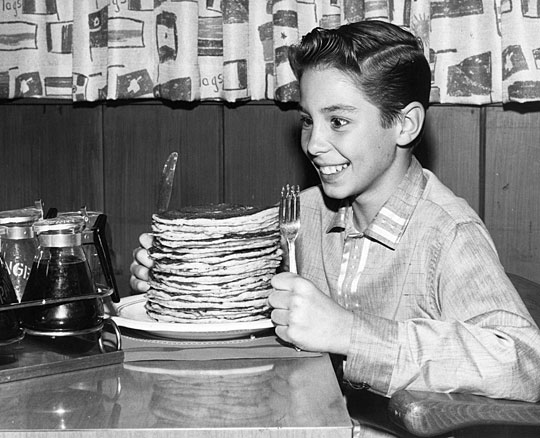 Child actor Johnny Crawford prepares to dive into breakfast, circa 1960. NPR commentator Bonny Wolf predicts that more restaurants will serve all-day breakfasts during the recession because breakfast is comfort food.

As Americans gather around kitchen tables and discuss the sinking economy, it's become clear that the financial mess is affecting exactly what they put on their tables.

NPR food commentator Bonny Wolf tells David Greene that the economic recession will color food trends in 2009. The words "comfort, value and simplicity," she says, will sum up the culinary scene.

"We're in uncertain times, and this is the time when we crave comfort food," Wolf says. "The cover of Gourmet magazine this month is a plate of spaghetti and meatballs."

Dining On The Cheap

Wolf also says people are going to be looking for bargains when it comes to dining out.

"The predictions are that we are over the era of pretension," she says. "What we're going to see is a lot more bistros and osterias, which are the Italian form of the bistro. They'll be less expensive, more casual, simple kind of restaurants."

These restaurants, says Wolf, will rely on a variety of strategies to entice customers into their establishments: lower prices, bar menus, fixed-price meals, more a la carte options, flexible hours and dishes that can be shared. People will also see breakfast-all-day offered at more places.

"This is the most comforting meal to people," she says, "and now you should be able to get it whenever you want it."

Home Cooking With A Twist

The recession has brought back home-cooked meals in a big way, Wolf says.

"It will mean an increase in cooking classes, because people will have to learn how to cook since we haven't been cooking at home for many years," she says.

"But it won't be exactly like your grandma's," says Wolf. "There will be slightly more sophisticated twists — artisan cheese mixed in with your mashed potatoes. And things will probably be healthier — less butter, more vegetables."

Wolf says people will start buying less expensive cuts of meat and do more slow-cooking and braising. "This may also bring back, the trend-spotters say, the family dinner, which has been a victim of two-income families and after-school activities for the last few years."

Kitchens will also become "greener" because people will set up their kitchens in more ecologically friendly ways, she predicts.

The big hit this year will be charcuterie platters, Wolf says. Look out for dishes filled with items such as pates and cured meats. She also thinks bite-sized desserts will be popular and that Peruvian cuisine will become the next hot ethnic cuisine.

"Certainly, at least Peruvian drinks," she says. "Pisco sours (a cocktail featuring a regional brandy) are expected to be big."

Noodle bars will also begin populating major cities beyond New York, where they're already common. "Noodles will be in soups. They'll be in main dishes," says Wolf. "And I've heard that anything with an egg on top is going to be very trendy this year."

The bottom line, she says, is this: "Cost is out and thrift is in."