Accessibility links
Obama's Election Prompts Soul-Searching In Europe Most Europeans were thrilled when Barack Obama was elected U.S. president. But when Europeans ask themselves, "Could a member of one of our own minorities be elected head of state?" the honest answer is: "Not any time soon." NPR's Sylvia Poggioli explains why in a three-part series. 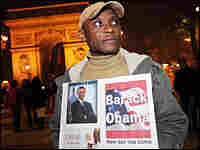 Supporters of Democrat Barack Obama celebrate his victory in the U.S. presidential election during a rally on the Champs-Elysees in Paris on Nov. 5, 2008. Boris Horvat/AFP/Getty Images hide caption 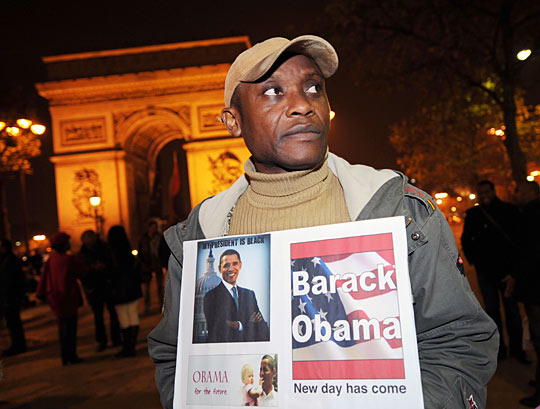 Supporters of Democrat Barack Obama celebrate his victory in the U.S. presidential election during a rally on the Champs-Elysees in Paris on Nov. 5, 2008.

Most Europeans were thrilled when Democrat Barack Obama was elected president of the United States, because he promised to sweep away policies that Europeans found odious. More than that, he represented hope, renewal and proof that the barriers of age, class and race could be transcended.

But Obama's victory also prompted soul-searching in Europe: Could his success be replicated there? Could a person of color ever become the leader of Germany? Italy? France?

Europeans know about America's segregationist past and the strains of racism that persist in the United States to this day. Many Europeans regard themselves as more enlightened than Americans in matters of race.

But when Europeans ask themselves, "Could a member of one of our own minorities be elected head of state?" the honest answer is: "Not any time soon."

NPR's Sylvia Poggioli explains why in a three-part series, reported from Germany, Italy and France.

Part 1: Germany has half a million people of African descent and 3 million people of Turkish descent. Many of them say they are ignored or treated like foreigners, even though their families may have lived in Germany for generations. There is no national debate on racism. To paraphrase one Afro-German: White Germans do not perceive themselves as racist. They act as if there are no other races in Germany. They perceive Germany as a monoracial country and conclude, "We can't be racist." Another observer says, "The German concept of identity is based on exclusion."

Part 2: In Italy, immigrants make up about 7 percent of the population. But suspicion toward immigrants is pervasive, reflected in some of the West's most restrictive citizenship laws. Not far from Naples, 6,000 to 8,000 black people live in a town now referred to as "Little Africa." Most survive, barely, in a gray economy controlled by the local Mafia. To the north, in a town called Citadella (The Citadel), ordinances are so restrictive that most immigrants could never afford to live there. "Yes, we're raising the drawbridge," the mayor concedes. Italian media and politicians often exploit public fears about "the Other."

Part 3: France's constitution enshrines the notion of egalitarianism. The country was once a haven for black Americans, such as writers Richard Wright and James Baldwin. France's colonies were represented in the French assembly. "Negritude," a black pride movement spearheaded by the Senegalese poet and statesman Leopold Senghor, was embraced as part of French cultural identity. But French society turned "white" again, one scholar observes, when the colonies sought independence in the 1960s. Today, millions of immigrants from Africa live in banlieues, large, rundown housing projects outside the big cities. Unemployment is high. Hope is low. But in the wake of Obama's election, French President Nicolas Sarkozy has announced new measures to increase diversity in the civil service, politics and the media. For the first time, concepts such as racism and discrimination are entering the national debate.