Accessibility links
German Minorities Still Fight To Be Seen, Heard Barack Obama's election was met with euphoria in Europe. But it's unlikely that a minority there will reach such prominence any time soon. In Germany, for instance, national identity is still strictly linked to ethnicity — and nonwhites still face considerable barriers.

The first in a three-part series 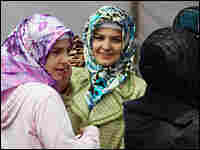 Young Muslim women chat after attending afternoon prayers at a predominantly Turkish mosque in Berlin in October 2008. Turks are the biggest minority group in Germany, with an estimated 3 million. Yet it was less than a decade ago that Germany abolished the law limiting citizenship only to those with German blood. Sean Gallup/Getty Images hide caption 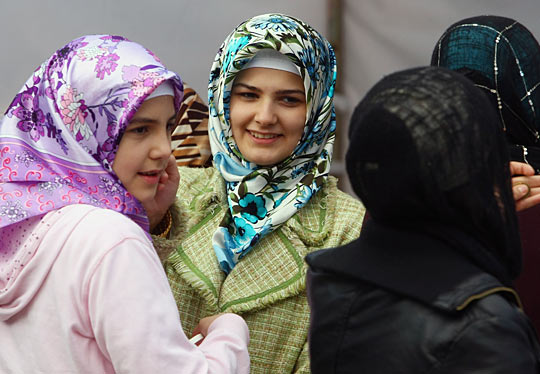 Young Muslim women chat after attending afternoon prayers at a predominantly Turkish mosque in Berlin in October 2008. Turks are the biggest minority group in Germany, with an estimated 3 million. Yet it was less than a decade ago that Germany abolished the law limiting citizenship only to those with German blood. 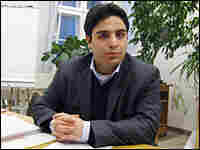 Sinan Senyurt, 23, is councilor of a Berlin district and a Green Party member. His grandparents came from Turkey, and he is one of the country's few minority elected officials. Sylvia Poggioli/NPR hide caption 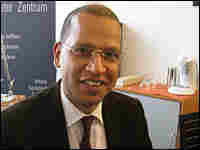 John Matip Eichler was born in Leipzig, in the former East Germany. The son of a German woman and an exchange student from Cameroon says that despite the racism that still exists in Germany, the election of Barack Obama "opens the eyes." Sylvia Poggioli/NPR hide caption

In Europe, Barack Obama's election as president of the United States was met with euphoria. But now, the continent is peering into the mirror, realizing there is little chance a member of one of its own minorities could reach such prominence any time soon.

Take Germany, for instance, where notions of national identity are still strictly linked to ethnicity. Nonwhite Germans are still fighting to overcome exclusion from mainstream society in many ways.

In a small theater club in Berlin's Neukoelln district, author Sharon Otoo stands on a small stage and, in front of a young, mixed-race audience, reads a work about the lives of black Germans.

The daughter of Ghanaian parents, Otoo is angered that German society labels her and the estimated half-million Afro-Germans as foreigners — or treats them as nonexistent.

"When you take white as the norm, and everything else is deviant from that, and your advertising is always targeted at white people, or when you write school books and they're targeted at white children, this is, for me, a racist experience," she says.

Otoo is part of a group that monitors racism in the media, repeatedly denouncing ads depicting minorities as comical figures and newspapers' use of physical attributes to describe different races.

Another member is Carl Camurca, son of a German mother and an African-American father. He identifies culturally with the land of the poet Goethe but says he is repeatedly stopped by police demanding to see his permit to be in Germany.

"White Germans do not perceive themselves as racist at all. The idea is there are no other races in Germany. Germany is a monoracial country so we can't be racist. It's pretty easy," Camurca says.

There is no national debate on racism. Yet surveys consistently show most Germans don't want foreigners in their country. And there have been — on average — 17 race-related killings annually in recent years.

Turks — the biggest minority group at nearly 3 million — are in their fourth generation.

But it was less than a decade ago that Germany abolished the law granting citizenship only to those with German blood.

And even the official, newly coined term "people of migrant origin" reflects a reluctance to accept that one-fifth of the population is not of German stock.

There are hardly any minorities in the mainstream media, police, judiciary or politics.

On The Outside Looking In

One of the few minority elected officials is 23-year-old Green Party member Sinan Senyurt, whose grandparents came from Turkey. The councilor of a Berlin district, Senyurt insists he is fully German.

"Calling me 'of migrant descent' is a subtle way to separate me from them. It's discrimination," he says.

"I was born here, so why do people tell me I am disadvantaged just because my grandparents were migrants? Maybe I am not a pure German, so call me a new German."

John Matip Eichler was born in Leipzig, son of a German woman and an exchange student from Cameroon — a father he hardly knew. He says racism was as intense in communist East Germany as in the West.

Life was difficult for his mother and others like her, he notes, using the word rassenschande, or "shame of race." Having relations with nonwhites — and particularly with blacks — was taboo and considered shameful to a woman's entire family. Sometimes, these women were forced to give their children to orphanages, Eichler says.

His mother defied society and raised her mixed-race son on her own. But since the fall of communism, an outbreak of racist violence in the former East Germany has made it an area that's too dangerous for minorities, so Eichler won't let his children take school trips there.

And throughout Germany, he says, people still ask him, "Where are you from?" — with the unspoken follow-up, "When are you going back?"

Jan Techau of the German Council on Foreign Relations says the German concept of identity is based on exclusion.

"For hundreds of thousands of years, identities were created by excluding those who weren't part of the crowd, by drawing up borders," he says. "And this is why becoming a German — when you are from Africa, Asia or Turkey or elsewhere — is such a difficult thing because not only do you have to subscribe to everything that's normal here, you also have to overcome this exclusion barrier."

One way a group of 100 young Germans has tried to overcome this barrier is through a musical called The Streets of Wedding, referring to the tough, inner-city district of Berlin where their school is located. The students created the score, lyrics and choreography for the musical, which was a runaway success and toured throughout the country.

It's an examination of life in Wedding, seen through the eyes of the students themselves. Nearly all are of "migrant origin" — socially disadvantaged youths with few prospects in German society.

At the Ernst-Schering school, young performers gather to discuss how the musical transformed them.

"Before, to many people, I wasn't visible," says Jennifer Hunze, who is of Polish origin. "I didn't speak out either, but I felt like a ghost. They didn't take any notice of me. But now I know I have to speak out, and they will take notice of me."

Most of the students had never been out of the district of Wedding before going on tour. And — in a country where only 10 percent of minorities pursue higher education — many of these young performers now want to go to universities.

The man responsible for motivating the young performers is musician and composer Todd Fletcher. He's African-American.

Long before the Obama campaign chose its slogan, Fletcher helped the students write a song with the refrain "Yes we can." He says the "Yes we can" attitude is "crucial."

Eichler, the Afro-German from Leipzig, says just as the musical's message empowered the kids in Wedding, Obama's election is giving all minorities more self-confidence. He hopes German society will finally wake up.

"The perceptions will change because we have all these stereotypes about people of African descent ... of sportsmen, entertainers, all this. And now we have a first family and we talk about Harvard, and we talk about taking over responsibility in a country, and this is completely new and it opens the eyes," he says.

Some versions of this story referred to Neukoelln as a "suburb" of Berlin. It's actually one of Berlin's 12 boroughs.