Accessibility links
City Folk Flock To Raise Small Livestock At Home For things like eggs and honey, some urban and suburbanites are skipping the store entirely and turning instead to their own backyards. Whether from tighter food budgets or local eating ideals, more people are petitioning their cities to allow small-animal husbandry. 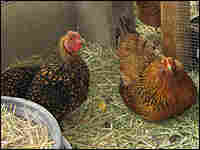 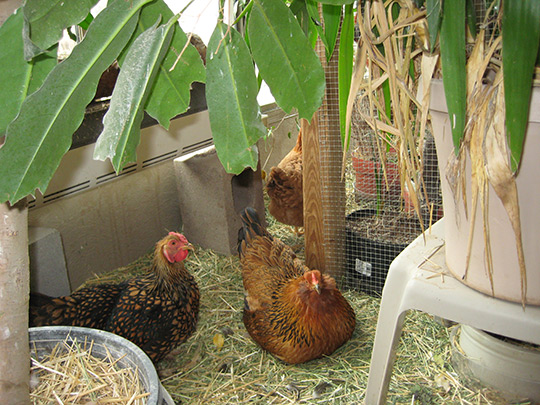 If you picked up a carton of eggs at the store this week, they probably set you back about $1 or $1.50. The organic, cage-free kind costs more like $3. But some urban and suburbanites are skipping the store entirely when it comes to things like eggs and honey and turning instead to their own backyards.

Whether from tighter food budgets or local-eating ideals, more and more people are petitioning their cities to allow small animal husbandry.

City dwellers are accustomed to being awakened at night by the occasional siren or the roar of a low-flying jet. But the nocturnal disturbances in a Denver neighborhood have a slightly more agrarian feel.

A rooster belts out a cry from one of the yards, where the homeowners also keep a pair of geese in a converted sun porch. What they don't have, however, are any permits for their minor menagerie. Denver does allow chickens for an annual fee. Roosters, though, are entirely outlawed.

So it's understandable that the homeowner, Brad, doesn't want his last name used.

Many of the folks pushing for urban livestock ordinances do so because of trendy modern ideas about sustainability and local food. They're known as "locavores."

He says he had them as a boy in the countryside and just kept on raising them even after moving to Los Angeles as a teenager.

"So I was walking around L.A. streets with a Rhode Island Red and people would say, 'Whoa, my god that's a beautiful bird! What is it?' 'Oh, it's a chicken.' 'A chicken?!' You know, city folks, never seen 'em before," Brad says.

That seems to be changing. Forget growing your own vegetables — cutting-edge locavores are now pushing backyard honey, eggs and milk. Researchers with the American Planning Association say that in the past six months they've fielded more questions about livestock ordinances than almost any other topic.

Colorado zoning consultant Christopher Duerksen is trying to simplify some of the answers. He's putting together a model sustainability code for cities trying to green up their rules.

Asked how city planners tend to react when they hear the word "chicken," Duerksen quips: "They tend to squawk. I think most planners, like most people, don't think of urban areas as food producing areas, but that's changing with the cost of food and questions about the health of food. And so we're seeing a real change in mindset among urban planners."

This means residents can now keep bees in Denver or raise a mini-goat in Seattle. But the real rock stars of this movement are chickens.

Urban livestock researcher Jennifer Blecha says that in recent years a dozen or more cities annually have joined the pro-chicken flock. And she says chicken advocates are starting to get more organized.

"When I over the last year or two have done presentations at various conferences on urban agriculture," Blecha says,"a swarm of people comes afterward and says, 'I'm from Cleveland and we need to get our regulations changed, can you please help?' 'Oh, we're from here and we're trying to get our regulations changed, could you give me some advice?'"

Some municipalities have bucked the agrarian trend. Just north of Denver, the planning board for the city of Longmont, Colo., recently gave the thumbs-down to a chicken ordinance. According to Jon Van Bentham, the board chairman, concerns ranged from unsightly chicken-coop construction to noise and smell, to slightly more dire topics.

"Avian flu came up," Van Bentham says. "Again, that's maybe kind of a nightmare scenario, but that's one of the places where folks are concerned that it comes from."

But backyard farmers seem to have one ace in the hole for answering any local objections: bribery. Plenty of Brad's eggs, for example, end up on his neighbors' breakfast plates.

"I ask them every now and then if it's bothering them and they say, 'Oh no, it doesn't bother us at all and besides, you wouldn't mess with the one that feeds ya," Brad says.

For the record, no eggs — goose, chicken or otherwise — changed hands in the reporting of this story.