Accessibility links
Chopteeth: Afro-Funk With Lunatic Energy The 14-piece Washington, D.C.-based afrobeat orchestra blends rhythms from all across the African continent, and then some. And as their name indicates, the band might just be crazy enough to pull it off. 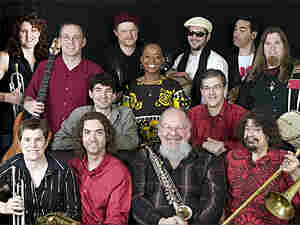 The term "Chopteeth" means just what it sounds like: eating one's own teeth, or at least being crazy enough to try it.

"It, as you say, means somebody who eats their own teeth," Shereikis says. "Somebody who's foolish enough to attempt something like starting a 14-piece afro-funk band."

Chopteeth borrows rhythms from throughout the African diaspora: Ghana, Kenya, Senegal, South Africa, Jamaica, even a James Brown cover. Now, the group has a self-titled debut album out.

"We write in a vein so that people can find themselves inside the music," Shereikis says. "We're not trying to impress anybody or be purists about anything — just respectful and thoughtful about how we piece things together. And so far, every musician — every African musician we've played with — has given us the thumbs up."