Accessibility links
A Little Less Flash At Annual Gadget Show The Consumer Electronics Show this weekend is the industry's annual showcase where companies hawk their crispest flat-screen TVs, their smartest smartphones and their loudest video games. There's still a lot of that — but the terrible economy is just as much a presence this year as GPS navigators and stereo systems.

The Consumer Electronics Show this weekend is the industry's annual showcase where companies hawk their crispest flat-screen TVs, their smartest smartphones and their loudest video games. There's still a lot of that — but the terrible economy is just as much a presence this year as GPS navigators and stereo systems.

NPR's Laura Sydell speaks with guest host David Greene about how the economy is affecting the electronics industry as well as what gadgets are creating the biggest buzz. 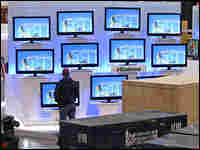 Preparations are under way for the start of the Consumer Electronics Show, which opens Thursday at the Las Vegas Convention Center. Joshua Brockman/NPR hide caption 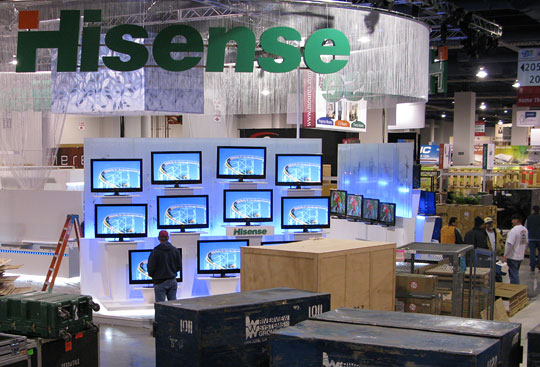 Preparations are under way for the start of the Consumer Electronics Show, which opens Thursday at the Las Vegas Convention Center. 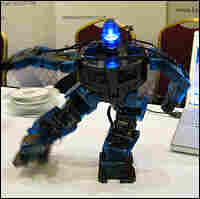 MechRC, a dancing robot, hit the tables at the Consumer Electronics Show in Las Vegas. This robot, manufactured by Kablamm Ltd., a U.K.-based company, was designed for both education and entertainment. Joshua Brockman/NPR hide caption 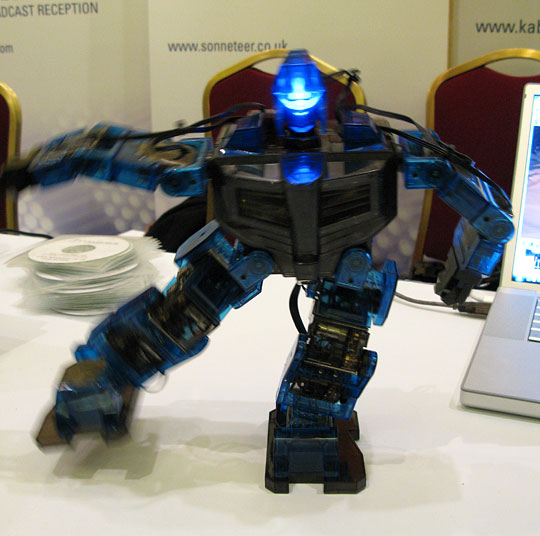 MechRC, a dancing robot, hit the tables at the Consumer Electronics Show in Las Vegas. This robot, manufactured by Kablamm Ltd., a U.K.-based company, was designed for both education and entertainment.

Environmentally friendly electronics, interactive devices, technology designed around Web access and gadgets that don't require cords — enabling users to download content on the go — are some of the most important elements consumers will seek in their electronics purchases in 2009, according to the Consumer Electronics Association.

As the annual Consumer Electronics Show gets under way, the association is forecasting that the five fastest-growing products for 2009 will be organic light-emitting diode (OLED) displays, electronic book readers, high-definition flash camcorders, netbooks — smaller versions of laptops that allow someone to surf the Web, check e-mail and do word processing — and climate systems that enable users to communicate with their thermostat to control and monitor their energy usage.

Last year, four categories of electronics — including digital televisions, cell phones, PCs and video games — were the driving force of the industry, accounting for 70 percent of sales, says Shawn DuBravac, economist for the CEA. Sales in these categories are also projected to grow in 2009, but at a slower pace.

What Does Green Mean?

The top trend for 2009 appears to be the whole green question. A majority of consumers — 59 percent — want to know the attributes that make a product environmentally friendly, and almost two-thirds of consumers believe that companies are overstating their claims of being environmentally conscious, says Steve Koenig, the director of industry analysis for the CEA.

"They are confused, and they're also a little skeptical when it comes to green claims," he says. But the green label is increasingly important to consumers — especially women — and the association says consumers are willing to pay for green electronics.

Consumers are also gravitating toward gadgets they can touch and talk to. This category includes devices with motion sensors, ones that can recognize gestures and those that feature 3-D displays. Many mobile phones now offer touch-screen interfaces and voice prompts for everything from calling friends to searching for directions or a restaurant on the Web. And this type of interface is increasingly being integrated into touch-screen PCs. Some companies are expected to unveil PCs this week with a mini secondary screen that pops out to the side and is designed for instant messaging or texting, Koenig says. Both Lenovo and Hewlett-Packard are planning to release notebooks with this feature.

Consumers are increasingly interested in computers without power cords and devices that allow people to connect to another gadget via a wireless connection like Bluetooth. That also means being able to take computers into nontraditional areas like the kitchen to listen to music, organize family calendars and assist with shopping, or to the backyard to watch movies. But the electronics association says consumers also want to add services that enhance the experience they have on these devices, such as Netflix or Pandora (an Internet radio provider), or navigation services from companies like Garmin and TomTom.

Web Time On The Go

Having Web access on a range of products is proving to be a consistent draw for consumers. It's already on mobile phones and GPS devices, and it's finding its way onto digital and video cameras, as well as in cars. The association said that the high rate of growth of smart phones points to consumer demand for this.

But even though consumers may be nervous about making large purchases for a car or a home, they're not holding back from technology purchases: DuBravac says the amount of money they are spending on this sector — slightly more than 17 percent for November 2008 — compared with spending for other goods with a life span that continues beyond a single use hasn't been this high since the 1960s.

Throngs of reporters gathered around some of the latest netbooks, which feature touch-screens that also swivel or pivot. Many of these computers have yet to hit the market. The appeal for consumers, schools and business travelers: a screen size of less than 10 inches, a full keyboard and a smaller price tag that is typically well below $500 — less than half of what Apple charges for its 13-inch MacBook.