Accessibility links
Israeli Troops Press Into Gaza City Israel's offensive in the Gaza Strip shows no sign of abating. The death toll inside Gaza is now close to 900. Israel stepped up the pace of its airstrikes. And Sunday, the ground offensive saw some of the fiercest fighting so far.

Israel's offensive in the Gaza Strip shows no sign of abating. The death toll inside Gaza is now close to 900. Israel stepped up the pace of its airstrikes. And Sunday, the ground offensive saw some of the fiercest fighting so far.

The death toll inside Gaza is now approaching 900 with dozens of Palestinians killed over the weekend. Many of them were women and children. Israel kept up its airstrikes today, and there's also fierce ground fighting with Israeli ground troops on the outskirts of Gaza City. NPR's Mike Shuster has more.

SHUSTER: That has convinced many in Olmert's cabinet that the operation should be expanded with the goal of crippling Hamas and cutting off the flow of weapons from Egypt through tunnels along what the Israelis call the Philadelphia Corridor - the border between Gaza and Egypt. That's the view of Israeli government minister Zeev Boim.

SHUSTER: We have to enlarge the military operation in Gaza against the Hamas and the terror infrastructure. And we have to consider control of Philadelphia route. Otherwise, we will see in the next round more missiles and long-range missiles.

SHUSTER: Not all of Israel's leaders favor pressing the fight in this manner. Israel's defence minister, Ehud Barak, is believed to oppose inserting more ground troops deep into Gaza's population centers, where many of the houses conceal bombs and explosive booby traps. Yesterday, Israel's president, Shimon Peres, also expressed a desire to put limits on the operation.

SHUSTER: Hamas for its part is also divided. The leaders of Hamas inside Gaza who have been under intense military pressure are believed to be open to negotiations that might lead to a ceasefire. Hamas's political leadership in Syria appears unmovable. Over the weekend, Hamas leader Khaled Mashaal issued his demands in a television appearance from Damascus.

SHUSTER: (Through translator) Firstly, an end to the aggression. This is not an equal fight. Secondly, the immediate withdrawal of the occupation from Gaza. Thirdly, lifting the siege on Gaza. Fourthly, the opening of all the border crossings, including the Rafah crossing. These are our demands, and we will deal with any initiative based on these points. We will not accept any initiative for truce whilst we are under attack.

SHUSTER: As a sign of growing Israeli confidence, Israel has reopened schools in many areas within target range of the rockets from Gaza. Mike Shuster, NPR News, Jerusalem. 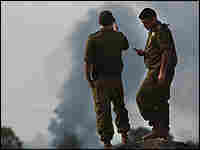 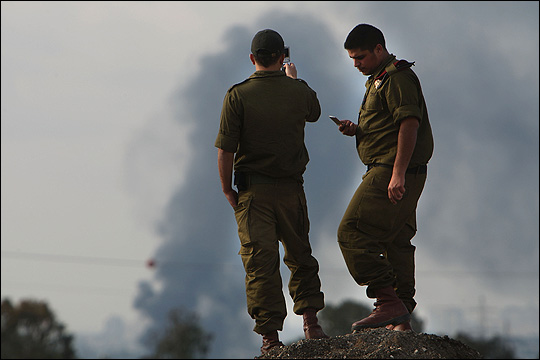 Israeli troops fought their way to the southern edges of Gaza City Sunday, engaging in what both the Israeli army and Palestinian residents of Gaza said were fierce gun battles.

Israel warned residents of the Gaza Strip that its military offensive against Hamas may soon enter a new, more intense phase.

The warning came as cease-fire talks in neighboring Egypt made little apparent headway, and a senior Hamas official said any hope of compromise with Israel was dead.

Meanwhile, gunmen in Syria fired at Israeli soldiers across the border for the first time since the Gaza fighting began more than two weeks ago. But there were no casualties and Israeli military officials said they believed Palestinians were responsible, not the Syrian army.

Thirteen Israelis, most of them soldiers, have also died in the fighting.

The past 24 hours alone saw at least 70 Palestinians killed and more than 200 injured, according to U.N. officials working in Gaza.

Israel continued pounding targets across the territory from the air, bombing dozens of smuggling tunnels along Gaza's border with Egypt Sunday.

Meanwhile, numerous rockets were fired from inside Gaza, some falling on the Israeli cities of Beersheva and Sderot.

Israeli Prime Minister Ehud Olmert said Israel is getting close to achieving its goals in Gaza, but more effort is needed.

Speaking during his weekly Cabinet meeting, Olmert gave no time frame for the conflict to end, but said that "more patience, determination and effort is still demanded."

Israeli newspapers are filled with speculation about what the next phase of the conflict will be.

Will Israel increase the number of its troops in Gaza and press the fight against Hamas more deeply into Gaza City and other heavily populated areas of the territory? Or is Olmert laying the groundwork for an Israeli decision to declare an end to the offensive?

Sunday, a spokesman for the Israeli military said additional units of reservists have now been deployed to Gaza, a possible sign that Israel intends to widen its operations there.

Israel's military intelligence chief told the Cabinet Sunday that the Israeli assault has hurt Hamas' ability to fight. He said Hamas appears to be suffering from ammunition shortages and has been hit hard by the deaths of senior militants.

At the same time, Israeli intelligence believes Hamas is not likely to surrender.

On Saturday night, top Hamas political official Khaled Meshaal delivered a fiery speech from the Syrian capital of Damascus, in which he said the Israeli assault on Gaza had accomplished nothing except killing off any hope of peace talks.

"You have put an end to any prospect of compromise," he said, addressing Israel. "No Arab or Palestinian official will be able to promote compromise with you anymore."

As for the scene on the Syrian border, an Israeli army spokesman said a number of bullets were fired from Syria at an Israeli army force doing engineering work near the border fence.

He said no one was hurt, but a vehicle was damaged.

Military officials said it did not appear as though the Syrian army was involved in the incident and that most likely it was Palestinians who fired the shots.

Last week, gunmen in Lebanon fired at least two Katyusha rockets across the border into northern Israel, raising fears that Hezbollah guerrillas might open a second front alongside the fighting in Gaza.

U.N. officials said the delivery of humanitarian supplies to Gaza resumed Sunday. Those deliveries were curtailed after Israeli soldiers fired on a U.N. convoy, killing one truck driver on Thursday.

But U.N. officials complain that the daily three-hour truce to allow supplies into the territory is not sufficient — and fighting has continued during these hours.

From NPR reports with Linda Gradstein and Mike Shuster in Jerusalem and Peter Kenyon in Cairo.