Accessibility links
'Obama Effect' Instills Hope In Europe's Minorities Europe celebrated Barack Obama's victory in the U.S. presidential election. But, as NPR's Sylvia Poggioli writes in this Reporter's Notebook, his win also has forced the continent to realize that prospects for a "European Obama" among its own minority populations remain bleak. 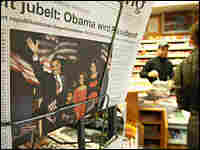 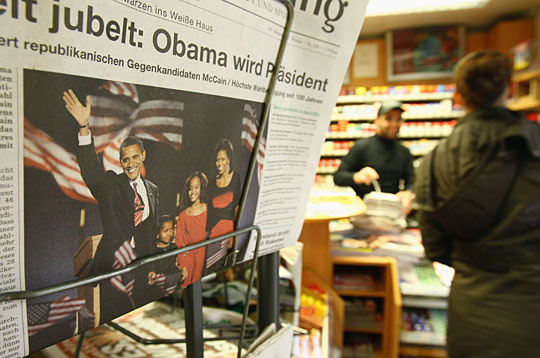 It's well known that Barack Obama was by far Europeans' favorite candidate — and his election was met with euphoria in the old continent.

There were some discordant notes, knee-jerk prejudices, at the "establishment" level. In Austria, veteran journalist Klaus Emmerich, known as the "Wolf Blitzer" of Austrian TV, caused consternation when he said, "I wouldn't want the Western world to be directed by a black man" and that "blacks aren't politically civilized." In Italy, Maurizio Gasparri, Senate whip of the main governing party, said, "With Obama in the White House, perhaps al-Qaida is happier." And Italian Prime Minister Silvio Berlusconi described the president-elect as "young, handsome and tanned."

Nevertheless, traveling around Europe and talking to lots of people following the Nov. 4 U.S. election, I encountered an immediate "Obama effect." For the first time in I don't know how long, it's cool to be an American reporter again. Everywhere I went, I found smiles, warmth and appreciation that America had chosen a black, a member of a minority, as president. Some young men, rappers, in a poor minority "ghetto" outside Paris cheered, "Obama, c'est la fin du monde!" – translated as "Obama, it's out of this world!"

However, the Obama victory also has forced the continent to look into its own mirror and realize that it could take decades before a "European Obama" emerges from its own growing minority populations. There is a now a lot of soul-searching as European societies begin to acknowledge the gap between highfalutin ideals of egalitarianism and the reality of discrimination and racism on the ground.

In the three countries I reported from, Germany, Italy and France, millions of people of immigrant heritage have little or no political representation — and there are hardly any minorities in the mainstream media, police or judiciary. Even when they have citizenship, they are still seen as foreigners, not as full-fledged members of their societies. Rejection of a "hybrid culture" is widespread in Europe.

People of immigrant origin are often subjected to paradoxical requirements. For example, in Germany's Baden-Württemberg state, immigrants applying for citizenship have been asked questions such as "what do you think about homosexuality?" (I was unable to determine whether there is a right or wrong answer.) In Italy, where citizenship appears to be a concession rather than a right, even those who are born there are not guaranteed citizenship when they turn 18, even if they have lived there all their lives. If citizenship is denied, it's not clear to what country they should be deported.

The concept of national identity in Europe was founded on exclusion. A German political scientist, Jan Techau, told me, "For hundreds of thousands of years, identities were created by excluding those who weren't part of the crowd by drawing up borders. And this is why becoming a German when you are from Africa, Asia or Turkey or elsewhere is such a difficult thing — because not only do you have to subscribe to everything that's normal here, you also have to overcome this exclusion barrier."

European societies, with their low birth rates and aging populations, now depend on the labor of millions of immigrants to maintain their economies and welfare benefits. But the phrase I kept hearing over and over was: "When will we finally be seen as German? ... Italian? ... French?" I asked this question of the mayor in the northern Italian town of Citadella, Massimo Bitonci, a member of the openly anti-immigrant Northern League. He said, "You Americans are used to diversity; we want to defend our culture and traditions."

Some of the most blatant examples of disparaging and even racist attitudes toward people of immigrant origin can be found in the media and advertising. German ads often depict people of color as comical figures, while newspapers use physical attributes to describe people of different of races. In Italy, immigrants make news headlines only when they are linked to crime, both serious and petty.

The biggest impact of the Obama victory in Europe has been among minorities themselves. France's undersecretary of state for human rights, the Senegalese-born Rama Yade, hailed his election, saying, "This is the fall of the Berlin Wall times 10."

In all my encounters with minorities, I found enthusiasm, a budding minority consciousness and a new-found desire to fight for their civil rights. In Germany, an estimated half a million blacks have emerged from the shadows of what one man, John Matip Eichler, told me is called "rassenschande, the shame of race, that means a woman who was engaging with a ...black guy, that was a shame for the family." Eichler was born in Leipzig, son of a German woman and an exchange student from Cameroon — a father he hardly knew.

Now, Eicher told me, thanks to Obama's election, the stereotype that blacks are only good as athletes and entertainers no longer holds.

In Paris, black activist Patrick Lozes told me that right after the election, he went to talk to President Nicolas Sarkozy to demand that minority candidates be included on party slates for the upcoming European Parliament election. And millionaire businessman Yazid Sabeg, the son of Algerian immigrants, has proposed affirmative action policies, a long-standing taboo because they clash with the French ideals of egalitarianism. Just last month, Sarkozy appointed him the new "diversity czar."

"What is happening in the States is a lesson for us. We have to start a process to transform French society and to admit that we have to correct the inequality," Sabeg said to me.

Among the three countries I visited, I found the most difficult situation for minorities is in Italy, once a poor country that sent millions of its own citizens abroad to find work. Among all Europeans, surveys show, Italians are the most suspicious about immigrants. Several towns governed by the Northern League have gone so far as to remove outdoor benches so immigrants won't gather in parks. In the south, near Naples, I encountered a large community of Africans, many of them illegal immigrants without documents, a pool of cheap labor exploited by the local mafia. Amnesty International has accused Italian politicians of legitimizing the use of racist language. The one black member of Parliament, Jean Leonard Touadi, acknowledged that Italian society will first have to go through a deep cultural transformation before minorities will be able to have full political representation.

The overall picture is bleak, but something is already changing, first of all in the language. I noticed for the first time the emergence of hyphenated Europeans: Among the mass of people of immigrant origin, individuals are now sometimes identified as Turkish-German, Afro-Germans, Afro-Italians, Italo-Albanians, etc. It's a small but important step, a sign that European societies can no longer see themselves as monocultural and mono-ethnic.