Accessibility links
HBO's 'Conchords' Wing It For A Second Season Bret McKenzie and Jemaine Clement return for a second season of their music-driven comedy series, which follows two hapless New Zealanders trying to make it as a folk-pop band in New York City.

Listen
HBO's 'Conchords' Wing It For A Second Season 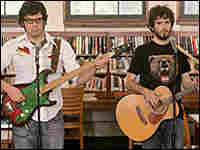 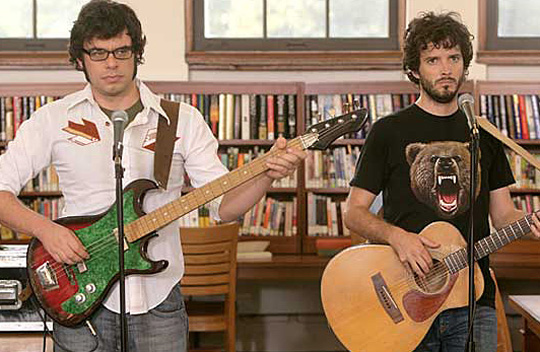 Their characters — also called Jemaine and Bret — are a New Zealand folk-pop duo trying valiantly (and failing spectacularly) to make it in New York.

At HBO.com: The Complete Season Premiere 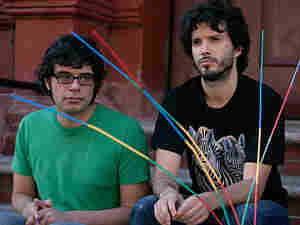 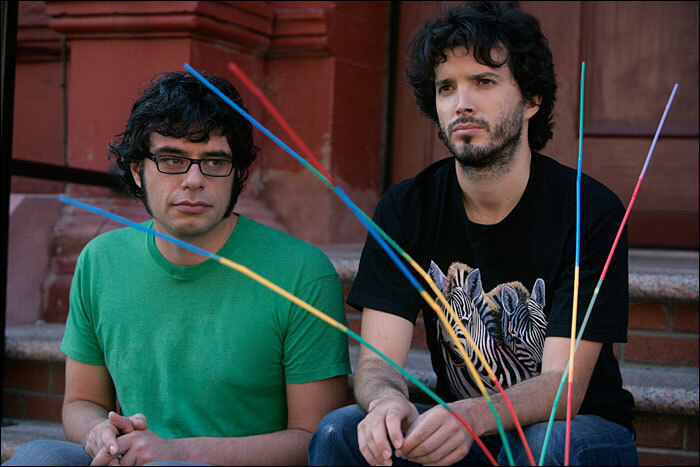 Undynamic Duo: Jemaine Clement (left) and Bret McKenzie are the hapless musicians at the heart of HBO's cult-hit comedy Flight of the Conchords.

If you missed the first season of HBO's comedy Flight of the Conchords, don't worry about catching up before Season 2 starts on Jan. 18.

The show's stars, Bret McKenzie and Jemaine Clement, can sum up a year's worth of shows in 11 seconds.

"Two guys from New Zealand come to New York," McKenzie says. "And they're a band. And they fail, uh ..."

See, the band has no gigs. Only one fan. And a hapless manager.

And through it all, Jemaine and Bret — the characters, we mean — greet their failure with awkward silence.

"The stereotypical sense of humor in New Zealand is dry and understated," McKenzie says.

"Even to the point of having none at all," Clement adds.

Clement: "It's kinda bordering on boring, and we keep it at that edge."

Which makes it all the more delightful when the boys burst into song. Their quirky musical numbers are a big part of what's made Flight of the Conchords a cult hit. Far more people watch their video clips on YouTube than tune in for the weekly half-hour episode on HBO.

And each show brings a different parody: Jemaine trots out his Barry White moves. Bret has his rap alter ego, the Rhymenoceros.

They do psychedelia, reggae, French pop — "Camembert, Jacques Cousteau, baguette," goes part of that lyric — and a whole riff on what it would be like if NASA launched David Bowie into space.

While the show has been on hiatus, an album by Flight of the Conchords made its debut at No. 3 on the Billboard chart. And the band has been selling out on tour.

Which puts a lot more pressure on the boys for their second season on HBO. How do you play convincing losers when you're already a hit?

Landing A TV Gig, Without Quite Knowing How

At a sound stage in Brooklyn, the pair is filming the last episode of Season 2. It explains how the Conchords got together — or at least a fictionalized version of the story. Clement and McKenzie are practicing a scene about how they came up with the idea for their first song:

Jemaine: "Let's go to this party!"

Bret: "We have to finish this song, man. We don't have any songs."

Jemaine: "You've forgotten how to rock the party."

Bret: "You know who likes to rock the party."

It didn't really happen that way. The real-life Jemaine and Bret were roommates and college students together in New Zealand.

"We weren't really planning on playing to an audience," McKenzie says. "We were just messing around, mainly for our flat-mates. Even they didn't like some of our songs. But we continued to play them while they were making their dinner."

All the while, the two were auditioning for acting roles on New Zealand TV, and never getting the parts.

"I remember saying, 'Let's forget acting and make a band,' " Clement says. "And this is the band we made."

"And then by making a band, we got a TV show," McKenzie says with a laugh.

Now, the two joke that they're one of New Zealand's largest exports — after lamb, butter and Lord of the Rings DVDs.

Just don't expect their real-life success to spill over into the sitcom.

A Loss Of Innocence, Roughly Once An Episode

"The second season, if anything, has some darker themes," McKenzie says. "Like perhaps by living in America for a couple of years, we've lost a little bit of our naivete."

"Almost every episode is about losing our innocence," Clement adds.

Jemaine even tries to become a gigolo — though he's so bad at it that he's reduced to asking ex-flings to pay him retroactively.

To rescue Jemaine from disaster, Bret breaks out a distinctly Conchords take on that old Police tune "Roxanne." Sample lyric:

Season 2 of Flight of the Conchords starts airing on HBO Jan. 18 — and if you don't have cable, never fear. The band has learned a few tricks from its online cult success: It'll now offer the show's songs for download after each episode airs.

'Flight of the Conchords' Official Site