Accessibility links
At Auto Show, GM Seeks To Shift Perceptions The auto industry is in such dire straits that some brands aren't exhibiting at the International Auto Show in Detroit this week. So what are the stakes for General Motors? Bob Lutz and other executives aim to get the word out about their cars to generate short-term sales. 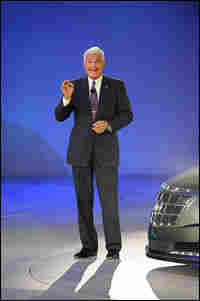 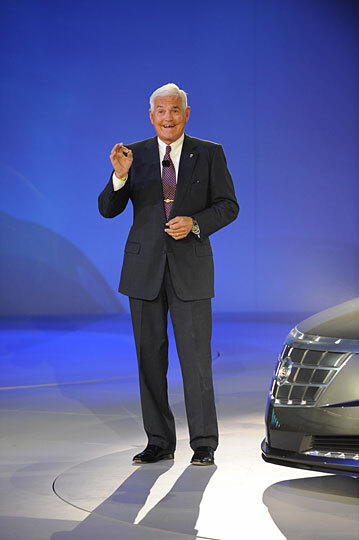 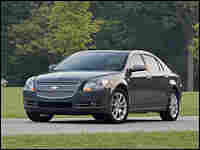 Like its competitors, GM is developing alternative-energy vehicles. But in the meantime, it's trying to sell its conventional cars, like the Chevy Malibu, to bring in revenue. © GM Corp. hide caption 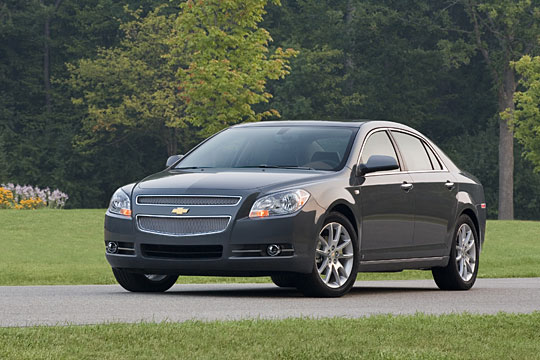 Like its competitors, GM is developing alternative-energy vehicles. But in the meantime, it's trying to sell its conventional cars, like the Chevy Malibu, to bring in revenue.

At one time, the auto show in Detroit was all about glamorous gas guzzlers on turntables — and models pointing suggestively at fins and fenders. But not this year.

The North American International Auto Show in Detroit is about to open to the public — and it is part hi-tech expo, part pep rally for the U.S. auto industry.

It is such a bad time for the industry that some familiar exhibitors, like Nissan, aren't even there.

So what are the stakes for the biggest U.S. automaker, General Motors Corp.?

GM's auto show exhibition is all about battery-powered vehicles like the plug-in Chevy Volt. On Monday morning, GM's top executive announced that the company will partner with the South Korean firm LG Chem to make lithium-ion battery packs. At the earliest, the Volt will hit the market in late 2010.

In the short term, GM's success is a lot more dependent on conventional automobiles, like the family sedan. Vice Chairman Bob Lutz shows off the Chevy Malibu, which he notes was 2008 Car of the Year, selected by a jury of 50 independent North American journalists — and that's in part because it has "incredible amounts of leg room, almost limousine-like proportions."

At the auto show, Lutz is like Jack Nicholson at the Oscars, or Ted Kennedy in the Senate. At 76, he's trim and tanned. He still epitomizes the swagger of the car business as it used to be. Lutz was Phi Beta Kappa at the University of California, Berkeley and a Marine Corps aviator. He has been a big deal at Ford, Chrysler, BMW and GM, where he has returned from retirement to be vice chairman.

If GM is to survive, Americans who've been buying Camrys and Accords have to start buying more of GM's Malibus.

The car did get good reviews, and Lutz says it is beautifully styled.

"We set out to give it a style that is reminiscent of German luxury cars, so it's got a lot of sort of a Volkswagen feel. And we added a lot of chrome trim, which is typical usually on luxury cars that cost quite a bit more than this vehicle, but all in an effort to make it look like a $40,000 car that sells at $22,000. Visual value counts for a lot."

But in all likelihood, convincing Toyota and Honda owners to buy a Chevrolet is going to be a hard sell.

Feedback From The American Car Consumer

Last week, some people near the car rental counter at Washington's Reagan National Airport sounded off about American cars. There were a couple of staunch American car owners, including one woman who works for a labor union and considers it a point of solidarity.

When asked if he would buy an American car, Sergio Rodriguerra of Washington, D.C., laughed and said, "Are you serious? I don't think I've owned an American car in my whole life."

Justin Crauter of Houston said he owns both foreign and domestic cars: a Nissan and a Jeep.

"I drive the Jeep in most cases, but it all depends on if I'm going higher end to, like, a luxury vehicle, then I prefer foreign," Crauter says. "Betty quality in my opinion, simply by the feel of leather in the seats — that's the main thing is the interior. Because to me, the engines that break, everything outside the vehicle is American comparable. But once you get into the interior, to me that's where the difference is when you're looking at luxury vehicles."

And Jamie Kraft of Washington said the American carmakers lost her to the foreign carmakers because of safety.

"At a certain point, Volvo started installing safety features and General Motors did not," Kraft says. "And they simply abandoned — as far as I was concerned — their consumers. And I've been buying Volvos ever since."

But Lutz, like many Detroit execs, says, "Read the reviews, test-drive the cars; they're much better now." Why is there a gap between what the automotive press says and what the public says? Lutz says perceptions die hard.

"Back 15 or 20 years ago, it was the people who really knew about cars and knew what they were doing who made those statements," Lutz says. "And then it filters down to the less and less knowledgeable. And now the whole cycle is starting again at the top, where the knowledgeable people who truly understand the business now say the new range of General Motors cars are probably the best vehicles of their types in the world. And that's going to trickle down — but it takes time."

"And there is not enough advertising dollars in the world to change the perception of people who are absolutely locked in and basically lock you out," Lutz says.

But when they let you in, it helps to actually have cars for them. A year ago, the Malibu was heavily advertised. General Motors generated real consumer interest in the "car of the year," but it underestimated its own success and sent Chevrolet dealers far fewer Malibus than they could sell.

"We underproduced, but that's better than overproducing," Lutz says. "Our history has been our plans were always too grandiose, and then we built too many cars and then you have to incentivize them to get rid of them, and that destroys the value of the car. It's much better to be behind demand and trying to catch up than the other way around. The car is still gaining momentum; it is an extremely well-accepted car."

But with GM and Chrysler on federal life support, and Ford only slightly better off, will Washington second-guess questions like, "How many Malibus is the right number to produce?"

Lutz has been in the car business for 45 years, so it's a change for him to operate on the federal government's nickel.

"I've never quite been in this situation before of getting a massive pay cut, no bonus, no longer allowed to stay in decent hotels, no corporate airplane. I have to stand in line at the Northwest counter," Lutz says. "I've never quite experienced this before. I'll let you know a year from now what it's like."

And in terms of the decisions that executives make at GM, how are they different? Lutz says they don't know. That's because Washington has not yet appointed a car czar, the government's designee to oversee the loans to GM and Chrysler.