Accessibility links
Immigrants Forced To Margins Of Italian Society Once an exporter of laborers, Italy now finds itself importing workers from abroad. Despite this need, many Italians feel they are the victims of an immigrant "invasion." Discrimination against foreigners is widespread, and there has been a recent surge in racist attacks.

The second in a three-part series 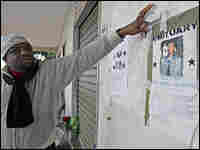 A man points to a poster showing a portrait of Karim Yabuku, one of six Ghanaians killed in Castel Volturno. Carlo Hermann/AFP/Getty Images hide caption 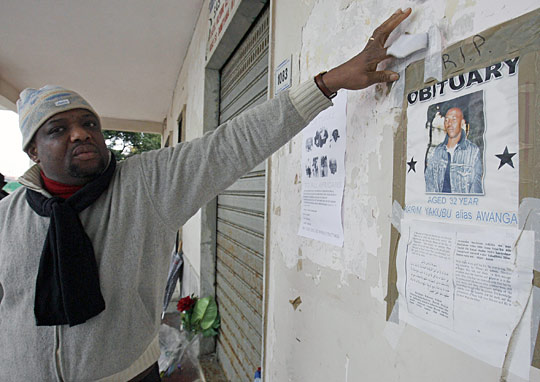 A man points to a poster showing a portrait of Karim Yabuku, one of six Ghanaians killed in Castel Volturno. 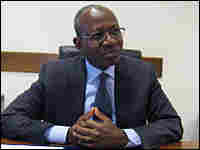 Jean-Leonard Touadi is the only black member of the Italian parliament. He believes insensitive language has increased Italians' fear of immigrants. Sylvia Poggioli/NPR hide caption 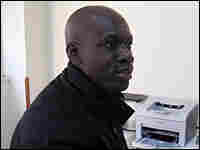 Jean-Rene Bilongo is a social worker who comes from Cameroon. He says the mafia controls the large pool of cheap immigrant labor. Sylvia Poggioli/NPR hide caption 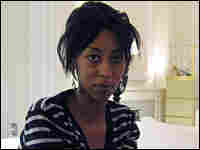 Once a poor country that sent millions of its citizens abroad to find work, Italy now imports workers. The country has an aging population and low birth rate, and it depends on immigrant labor to maintain its economy and welfare benefits.

But despite the country's demand for laborers, Italians are extremely reluctant to welcome immigrants.

Italy now has an estimated 4 million to 5 million immigrants — about 7 percent of the population.

Surveys show that among Europeans, Italians are the most suspicious about immigrants. A majority believes immigrants have too many rights and that many of them should be deported, and that immigration has brought only crime. Talk of an immigrant "invasion" is widespread.

Castel Volturno is located on the coast 20 miles north of Naples. Once a summer resort, it's now called Little Africa, home to 6,000 to 8,000 black people who live in rundown condos.

Most immigrants there eke out a living in a gray economy controlled by the Camorra, the local mafia. Last fall, hit men gunned down six Africans — most likely for breaking "the rules."

"This is Camorra's land," says Jean-Rene Bilongo, a social worker who comes from Cameroon.

The workday starts at 5 a.m. for the immigrant laborers, who face long waits for a ride to Naples. Buses are so full that workers often must wait for a second or third bus before reaching their destination, day-labor sites — usually street corners or roundabouts. There, they wait, hoping someone will pick them up for a day job.

Most immigrants in the town are illegal, without documents. Bilongo says they're abandoned.

"We are still considered as ghosts, as something just less than human beings. No one is interested in your condition, your future, your past — no one at all," he says.

Xenophobia is strongest in the north, where most immigrants have regular jobs.

Citadella — the Citadel — is a small town, one of the few with perfectly intact medieval walls, surrounded by a moat.

It's living up to its name.

Mayor Massimo Bitonci has sharply restricted immigrants' rights to live there. His ordinance sets a high threshold: a regular work contract, a minimum income of $5,000 per family member, and a required home size that is too expensive for most immigrants.

"We're very frightened by what we see around us. We write the rules here, we want to safeguard our culture," he says. "Yes, we're raising the drawbridge, and we're on the battlements to defend ourselves from external attacks."

Bitonci's ordinance has been copied by many other towns governed by the Northern League, an openly anti-immigrant party. One of its posters shows a Native American with the words, "They let immigrants in, and now they're living on reservations."

The Northern League is a key part of Italy's center-right government. It wants to make illegal immigration punishable by up to four years in prison, require doctors to report to police any patients who are in Italy illegally, and create separate classrooms for Italian and immigrant children.

The northern city of Padua boasts a history of glorious guests — Giotto painted there, and Galileo taught mathematics.

But now, nobody wants outsiders. Residents allege out loud that immigrants bring only disease, and a local Northern League politician claims that, with all their different languages, they bring only chaos.

Michael — he wouldn't give his full name — is a 29-year-old Nigerian. He says that every time he takes a bus, he sits at the back. Italians, he says, look at him as if he were an alien creature.

The language Italians hear from the mass media and politicians is disparaging about "the Other." One Northern League minister calls Africans "bingo bongos." Roma people — or gypsies, as they're sometimes called — are often depicted on television as kidnappers of white children. And Prime Minister Silvio Berlusconi made international headlines after Barack Obama was elected U.S. president by describing him as young and "tanned."

Jean-Leonard Touadi is the only black member of the Italian parliament. He believes insensitive language has increased Italians' fear of immigrants. Politicians' favorite buzzword, he says, is security.

And that, he says, means that migrants are criminals or potentially criminals — and that they lie at the heart of Italians' insecurity.

"This is why they are unprepared for immigration. We are part of the future of this country, but they still see us as barbarians," she says.

Warnings Of A 'Racism Emergency'

Italy's suspicion toward foreigners is reflected in one of the West's most restrictive citizenship laws. An immigrant has to live in the country 10 years before applying, and children born in Italy are not guaranteed citizenship when they turn 18, even if they have lived in the country their entire lives.

Italians' self-image as brava gente — good people — clashes with an increase in acts of racist violence. The European Network Against Racism says Italian police are the second-largest group — after citizens — that commits racist crimes in Italy. And Amnesty International has accused Italian politicians of legitimizing the use of racist language.

Many Italians are worried about what the media calls a "racism emergency."

Italian President Giorgio Napolitano has even called on the Catholic Church to help Italians overcome racism.

Touadi, the parliamentarian, says Italy must realize it's no longer a monocultural society. Italians have to work hard — in society, schools and the media — to raise a "new generation" of Italians and to change behavior and language. A cultural transition must come first, and a political transition will follow, he says.