Accessibility links
Civil Rights Icon To Deliver Inaugural Benediction The Rev. Joseph Lowery marched alongside the Rev. Martin Luther King Jr., with whom he co-founded the Southern Christian Leadership Conference. On Jan. 20, Lowery, 87, will deliver the benediction at the inauguration of America's first African-American president. 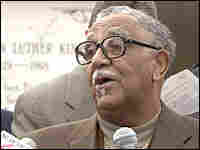 When America inaugurates Barack Obama as its 44th president — and its first African-American — next week, the benediction will be delivered by a civil rights icon, the Rev. Joseph Lowery.

Obama personally called Lowery to ask him to be part of the inaugural program.

"Of course I accepted," Lowery says. "I was honored and humbled to do it, and I look forward to it. Very excited about it."

The 87-year-old Lowery has been a dominant presence in the civil rights movement for more than a half-century. He was born in Huntsville, Ala., began his civil rights work in the 1950s and worked for voting rights in the 1960s.

After King's death, the Methodist minister continued to work for civil rights and may be best known for his outspoken nature and his ability to turn a phrase. He outraged some in 2006 when he read a poem at Coretta Scott King's funeral that indicted the Bush administration and criticized the Iraq war.

"We know now there were no weapons of mass destruction over there, but Coretta knew, and we know that there are weapons of misdirection right down here," Lowery said in 2006.

Lowery was a longtime president of the Southern Christian Leadership Conference, and in 1982 he spoke at the group's 25th anniversary meeting.

"We've come a long way, but black elected officials in this country still only comprise 1 percent of the total number of elected officials," he said. "We've got to hold fast to dreams of political justice."

Lowery was one of Barack Obama's most ardent supporters, even when many African-Americans across the South were backing Sen. Hillary Clinton. Lowery decided to back Obama after hearing the then-senator from Illinois speak at a voting rights march in Selma, Ala., two years ago. Lowery says the change he has witnessed in society and politics is remarkable.

"I'm very proud that people across this country, even in Southern states, chose to vote for an African-American. That's the sign of real progress, and I'm so grateful that I lived long enough to see it come to pass," he says.

Lowery says that, as the first African-American president, Obama will be scrutinized intensely. Obama's decision to select Rick Warren, a high-profile megachurch pastor who opposes gay marriage, to give the invocation has upset some supporters. But Lowery defends the decision and calls it part of the president-elect's promise to include people with differing political and religious views.

"Oh, I don't think it hurts. I think it'll pass," Lowery says of the brouhaha. "I think it'll even pass before the ceremony is over."

Lowery says the president-elect has inspired the nation to end hostility and division, and he sees the inauguration as the beginning of a new era in America.

"And I hope that in my closing prayer, I can find a way to inspire people to take that spirit, that warmth — that feeling of conviviality and brotherhood — and take it with us back down into the valley," Lowery says.

Beyond that, Lowery would not reveal just what he will say at the inauguration. All he will say for now is that he's working on it.