Accessibility links
The Hold Steady: Rock Stripped Bare The group gets pared down to a trio for this casual acoustic session from KEXP. Craig Finn stood at the mic as Tad Kubler and Franz Nicolay handled an acoustic guitar, banjo and accordion. The set-up lets Finn's voice resonate, which means his great lyrics stand out even more than usual. 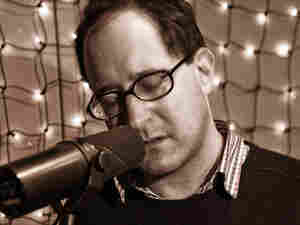 It always feels like a homecoming when The Hold Steady visits us at KEXP. I have a particular kinship with those guys, being a former Minnesotan myself. Hearing frontman Craig Finn sing about the Grain Belt Brewery and the Golden Gophers — or giving driving directions when he sings "Southtown Girls" — always fills me with sweet nostalgia. I couldn't resist building a Minneapolis-based set leading into the band's in-studio appearance, kicking off with a track from Atmosphere and closing with a rare 1982 live performance from The Replacements at the legendary club First Avenue.

So the session started out with a great familiar feeling — not only because of our roots, but because of the band's history with KEXP. The last time The Hold Steady visited us was back in 2007, when we broadcast from New York during the CMJ festival, and the group put on such a rip-roaring and rocking performance, you'd have thought they were on stage at The Uptown Bar.

This time around, though, it was more of a casual affair, with just three of the guys in the studio. Finn stood at the mic, but guitarist Tad Kubler and keyboardist Franz Nicolay made themselves comfortable in nearby chairs instead. In fact, for this session, Nicolay brought out both a banjo and an accordion. The songs took on a whole new feeling in this stripped-down setting, letting Finn's voice resonate and his great lyrics really stand out. Whether he's singing about Edina High School or asking for Adderall, I'll always listen.