Accessibility links
Can Fisker Save American Cars? Fisker Automotive, based in Irvine, Calif., aims to revolutionize the U.S. auto industry with beautiful environmental cars. The CEO says that his startup has a great advantage because it's comfortable with change.

Listen
Can Fisker Save American Cars?

Fisker Automotive, based in Irvine, Calif., aims to revolutionize the U.S. auto industry with beautiful environmental cars. The CEO says that his startup has a great advantage because it's comfortable with change. 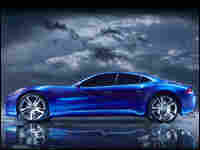 This is Day to Day. I'm Alex Cohen.

And I'm Madeleine Brand from the North American International Auto Show in Detroit. It's where the car companies are unveiling their new designs, and there is a lot of talk about plug-in electric hybrids here. But we keep hearing 2010, 2011 before we can actually buy them, except for one company you probably have never heard of. It's called Fisker Automotive, and that company's making me think the future of the car industry isn't necessarily here in Detroit.

It's here in Irvine, California, 2,500 miles to the west of Detroit. And no, I didn't just transport myself here over the last few seconds. I came out here a few days before going out to Detroit to meet Henrik Fisker, the owner of Fisker Automotive, to ask him, really, here in this corporate office park, this is the future of the American car industry?

So we are standing in front of a drawing table. You have some drawings here. What are they?

Mr. HENRIK FISKER (CEO, Fisker Automotive): Well, these are some of the sketches for variations of the Karma plug-in hybrid car. Eventually, the Karma will actually spun - spin off a family of vehicles that - so it's not only going to be a four-door, as we showed today or yesterday. There will also be a convertible version and later perhaps a more family-oriented version as well.

Mr. FISKER: Well, I think everybody can kind of see - I don't think it's a secret. I think everybody can see where the world is going. And I think for me, when you start seeing movie stars driving around in a Toyota Prius instead of a Ferrari, you realize definitely that something is changing. And I think, you know, I love sports cars, and I love fast beautiful cars. And what I've seen so far was they were always tiny cars, not always that attractive, and usually very slow.

So I thought if we're going to have a bright future for the automobile, we've got to get back to why did we fall in love with the car? And that was because it looked good, it's because it was fast, it was exciting. And I wanted to bring those elements into an environmental vehicle, into a green car. So that's kind of where the idea came from. But this car is really designed from the beginning as a plug-in hybrid.

BRAND: How long does it take to charge?

BRAND: So if it is that simple, why has it taken until now for this technology to be used and developed?

Mr. FISKER: The automakers today, they have basically developed their cars in the same way for almost a hundred years. And suddenly, you're now telling them to change completely the way they think. And that's very hard because all the automakers are huge global companies. So you just don't change from one day to another, where some of the new startup companies like us, we don't have any history. We don't have to sell a whole bunch of gasoline cars.

You know, that's probably our advantage that we've been able to assemble a team of automotive engineers from all over the world and put them in one location, and they are working almost with no limitations in terms of creativity, and get a vehicle together that really, I think, shows where the future is going, if you still want to have exciting fast cars.

BRAND: We are in the midst of a global recession. Unemployment is very, very high. People are getting laid off left and right. Your car costs nearly $90,000. Is this the right time to be launching this car?

Mr. FISKER: There's room for every segment. It's just like the restaurant business. There's always going to be room for somebody who wants to go in and have a fillet steak, and there's going to be a room for somebody who just wants a burger. And because the economy is bad, it doesn't mean we all have to eat burgers. And I think there's still room enough - you see people are still buying Mercedes and Lexus's, and why shouldn't we go in and take some of that market?

A small company like us, I would say it's almost impossible for somebody in any startup to go out and suddenly serve the mass market, because you need huge factories. You need big assembly lines, billion dollar investments. So before you get to that point, you have to start small. You have to create a brand, and you have to show that you can actually do a vehicle. And then you start moving down market and create a higher volume. And that's exactly our philosophy. 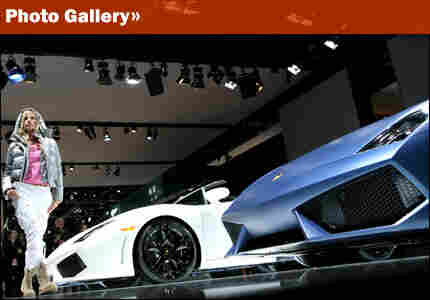 The presentations were pared down this year in Detroit, but not everyone was willing to give up the frills. Take a tour through the most creative, frugal and politically strategic reveals. Stephen McGee for NPR hide caption