Accessibility links
Democrats Prepare Contingency Plans for Bush Veto Melissa Block talks with Rep. John Murtha (D-PA), chair of the House Defense Appropriations Subcommittee, about what compromises the Democrats are willing to make on the Iraq war spending bill that President Bush is expected to veto. 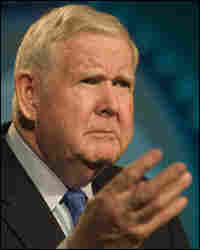 President Bush on Tuesday will receive a bill funding the war in Iraq from Congress. It contains a timetable for a troop withdrawal — and as the president has said for weeks, he will veto it.

So what happens next?

Rep. John Murtha (PA), chair of the House Defense Appropriations Subcommittee and a leading anti-war Democrat, talks to Melissa Block about what compromises the Democrats are willing to make on the bill.

This week, you are sending the president a bill that he has vowed to veto. Where do you think this goes from here, assuming that a timetable is out? What kind of compromise will Democrats be willing to make?

Well, we're working on a number of different versions of what we can send. I'm recommending – and I don't know that will be accepted by the leadership — but I'm recommending a two-month window, so we can look at it again in two months.

The leadership is going to meet with the White House, with the president on Wednesday, and they'll make a decision about whether there's any possible – but we've compromised already on two things, so it's time for the president to step up and make some compromises.

When you mentioned a two-month window, you're talking about funding the war for two months and then reevaluating after that.

Yeah, we'd fund operation and maintenance and personnel costs, particularly, for a two-month period. The other things we'd fund for the whole year: the health care, the vehicles that they need ...to resist the IEDs... We'd take care of the Walter Reed problem and some of those things for the whole year.

Let's talk about the notion of including benchmarks with penalties in this bill. Yesterday, Secretary of State Condoleezza Rice said the president would not accept the bill if it included benchmarks that would punish the Iraqi government if they didn't meet them on things like sharing oil wealth, sharing political power. She says that would tie the hands of the generals and the ambassador, who need what she called "flexibility and creativity" to make progress there. What do you think of that argument?

Well, I like the new ambassador — Crocker is an outstanding ambassador. But I have a great concern about the Iraqi government. Every time they say they're going to do something – for instance, what we're talking about is a change in the way the oil is distributed, and that's something they agreed to – something, a change in the constitution to give the Sunnis more flexibility in their constitution, which they agreed to – all the things that we talked about the Iraqis have already agreed to. And what's happened in the past, if you don't have any teeth in the agreement, then they just don't do it. And the United States steps in and makes an excuse and puts more and more troops into harm's way.

This is a civil war that's being fought there. The Iraqis have to take responsibility. And until we put teeth in the agreement, I don't think they'll accept that responsibility.

Congressman Murtha, is one option here to do nothing when the president vetoes this bill? To not bring another one up and basically not fund this war?

We're not going to let that happen. We will pass something, and we hope we will come up to some compromise the president is willing to accept.... The public reaction has been that he is not responding to the compromises that we've offered. So he needs to understand we want to do what's right. We want to end this war. We don't want to give them an open-ended commitment, and that's what it is, has been in the past — that's what the people are against. We want the Iraqis to understand it's not open-ended. The American public spoke in the last election.

There's four ways you can influence a president. First of all, there's the polls, which didn't influence him. Second of all, there's an election, which should have influenced the president. It has had some influence: He fired the secretary of defense. Third, there's impeachment, and fourth, there's the power of the purse. We're using the power of the purse to negotiate with the president, and I hope we'll be able to work out a – we want to work with the president to end this long conflict, where our troops are caught in a civil war.

Congressman Murtha, when you include impeachment in that list of four, are you raising that as a realistic possibility of something that could happen here?

Well, I'm just saying that's one of the options that Congress has on the table. I'm getting more and more calls from the public about impeachment. Realistically, obviously the power of the purse is the most powerful influence that the public has, and we have to exert that influence to our utmost ability.

You're saying you're getting calls from the public on impeachment. Is the call for impeachment anything that you would consider?