The third in a three-part series 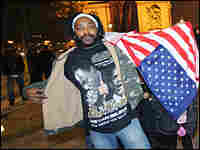 A supporter of Barack Obama celebrates his victory in the U.S. presidential election on Nov. 5, 2008, on Paris' Champs-Elysees. Boris Horvat/AFP/Getty Images hide caption 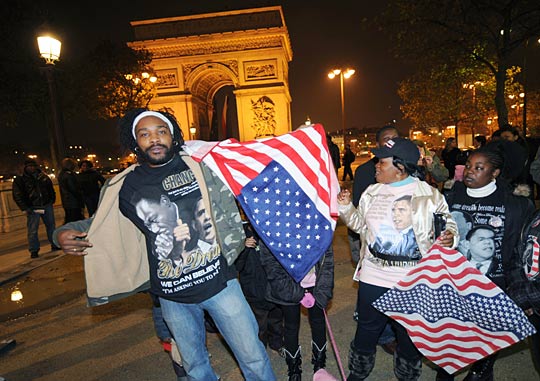 A supporter of Barack Obama celebrates his victory in the U.S. presidential election on Nov. 5, 2008, on Paris' Champs-Elysees. 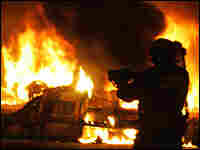 An anti-riot policeman faces a group of youths with his rubber-bullet gun in Clichy-sous-Bois, north of Paris, on Oct. 28, 2005. Simmering racial tensions erupted into rioting across the country after two teenagers died while evading the police. Joel Saget/AFP/Getty Images hide caption 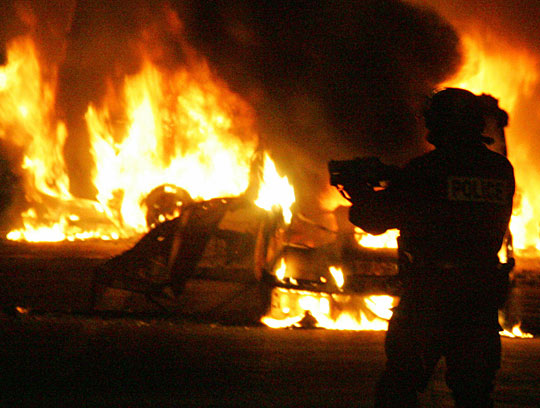 An anti-riot policeman faces a group of youths with his rubber-bullet gun in Clichy-sous-Bois, north of Paris, on Oct. 28, 2005. Simmering racial tensions erupted into rioting across the country after two teenagers died while evading the police. 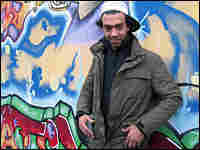 A rapper who calls himself Kaky Brown says kids in the poor minority "ghetto" of Gennevilliers outside Paris are lucky if they can get a job as a street cleaner. Sylvia Poggioli/NPR hide caption 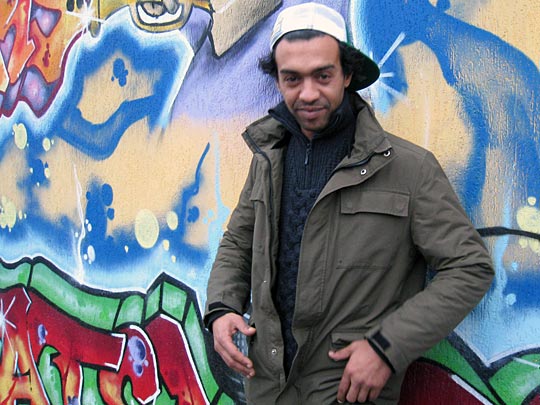 A rapper who calls himself Kaky Brown says kids in the poor minority "ghetto" of Gennevilliers outside Paris are lucky if they can get a job as a street cleaner. 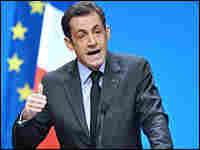 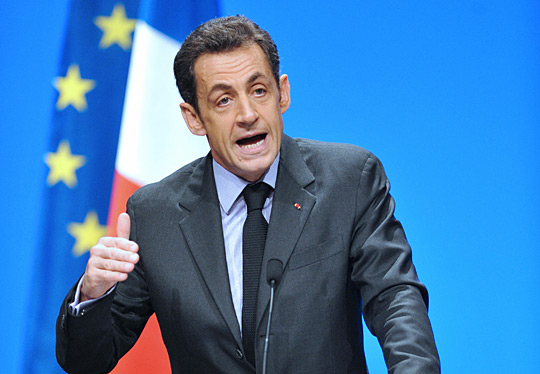 With a constitution enshrining the notion of egalitarianism, France has always been considered more enlightened than America on matters of race.

At an exhibit in Paris marking the 40th anniversary of Martin Luther King's assassination, a young guide explains what racism is. Racism, he tells a group of children, is when you consider a person of different origin or skin color to be basically inferior.

Jocasta Matos, one of the exhibit organizers, says France today is not as bad as the American South in the 1950s, but racism is still strong.

"It is tough here for all minorities. They don't beat us, but they insult us. They show disdain for us. This is perhaps even worse than being beaten, this sense of not being welcome, not accepted. We fight against this," she says.

And the Obama victory has jolted minorities in France into demanding a greater voice in society.

Obama And The Possible

After the U.S. election, Patrick Lozes — founder of one of the first black associations in France — says he spoke directly to President Nicolas Sarkozy, demanding minorities be included on party slates for the upcoming European Parliament election.

"What's so extraordinary about Barack Obama's election is that this was the first time we didn't hear only negative things about us," says Lozes. "Young people now believe they can conquer the world. It has given them a new consciousness of their possibilities. A black can be an ambassador, a doctor, anything. We must nurture this equal rights movement."

Today, the French political, academic and media establishments are lily-white. In France, it is illegal to gather data according to race and ethnicity, so it's impossible to measure the minority population's exact size. It is estimated at between 10 percent and 15 percent of the total 63 million.

There are black parliamentarians from overseas territories, but only one from continental France and hardly any blacks or people of Arab origin among 36,000 mayors.

There are no minorities among the military brass, in the foreign service or judiciary.

And even those few who do break barriers still confront what historian Pap Ndiaye calls "hidden racism." A black professor at the School for Advanced Study of Social Sciences, Ndiaye describes what happens when he goes into the university library.

"The person will look at the ID and scratch the picture as if this ID was a fake ID, as if there was some kind of bizarreness in the fact of seeing a black man with a faculty ID," Ndiaye says.

Once A Haven, Now Hostile

France was not always so hostile. Paris was once a haven for many black Americans — writers such as Richard Wright and James Baldwin, and the great entertainer Josephine Baker.

That was the heyday of Negritude, a black pride movement in the 1930s spearheaded by the Senegalese poet Leopold Sedar Senghor — which was embraced as part of French cultural identity.

But, Ndiaye says, society turned white again when the colonies sought independence in the 1960s.

"Many French thought that black Africans were not grateful [for] all the good things that French civilization — medicines and schools, [etc.] — had brought to their areas and populations," he says.

Today, activists have found that while 55 percent of blacks in France have university degrees, most work only low-skilled jobs — such as security guards at supermarkets or janitors.

Businessman Yazid Sabeg is a self-made millionaire, whose parents were Algerian immigrants. He lives in a large apartment in Paris' posh 16th arrondissement. Paintings by Flemish masters cover the walls.

"The French society is frozen. The elite is protecting itself and also its children," he says.

The day after Obama was elected, Sabeg released a manifesto. It urges adoption of affirmative action policies, still a taboo because they clash with French ideals of egalitarianism.

"What is happening in the [United] States is a lesson for us. We have to start a process to transform French society and to admit that we have to correct the inequality," he says.

Sabeg says the most visible examples of inequality are the banlieues, large, dilapidated housing projects outside the big cities. Three years ago, they were rocked by riots. For weeks, minority youth protested the lack of opportunities.

Sabeg laments no improvements have been made — the impoverished population lives there in increasing segregation.

"This is very dangerous. It is not French tradition to have ghettos, and you have millions and millions of peoples, three generations of population in these suburbs. This is a social bomb," Sabeg says.

Desperation In The 'Banlieue'

It is not easy to reach the banlieues, which require long train rides from Paris. Once there, the sense of hopelessness is palpable.

In Gennevilliers, tough-looking guys hang out at an empty shopping mall. Only a few rundown stores are still in business.

The mood is resentment toward outsiders. But one topic brings joy and makes them smile — the fact that Americans actually chose a black man for president.

A rapper who calls himself Kaky Brown says kids here are lucky if they can get a job as a street cleaner. He raps in quiet desperation:

We're in a ghetto like Soweto, no way to escape,
They talk about quotas for us but never do a thing,
We're stuck in misery, we're desperate,
There is so much violence, no respect for us,
What we need is a revolution, we need revolution.

As interior minister in 2005, Sarkozy described the young rioters as "scum."

But in December, in the wake of the Obama election and growing tensions in the banlieues, Sarkozy — now president — announced new measures to bring diversity to elitist institutions, the civil service, politics and the media.

"How can we talk about a republic when your success at school and in professional life depends not on merit but largely on your social origin, the neighborhood where you live, your name or the color of your skin?" Sarkozy asked.

The president also appointed Sabeg as diversity czar. The millionaire son of Algerian immigrants knows how hard his job will be.

There is still "big resistance," he says, to the notion that the government and French society should give more to those who need more — especially if those in need are black or Arab.

But for the first time in France, concepts such as racism and discrimination are entering the national debate. Sabeg is convinced that step by step, the establishment stranglehold on French institutions will be broken.