Accessibility links
Primate Gestures May Be Clue to Human Language Researchers at Emory University analyzed hundreds of hours of videotaped gestures used by two groups of chimps and two groups of bonobos. The results of their study could lend a clue to how human language evolved.

Listen
Primate Gestures May Be Clue to Human Language 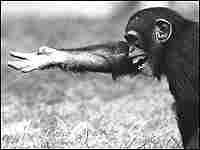 A juvenile chimpanzee tries to reclaim food that a dominant has taken away using the outstretched hand gesture. Frans de Waal hide caption 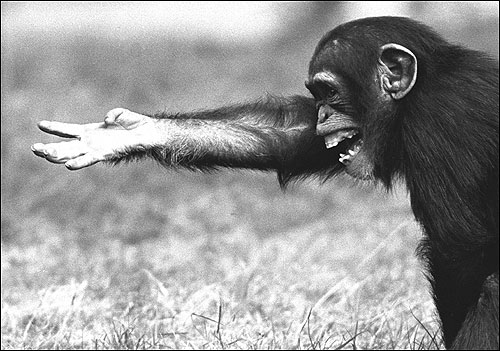 A juvenile chimpanzee tries to reclaim food that a dominant has taken away using the outstretched hand gesture. 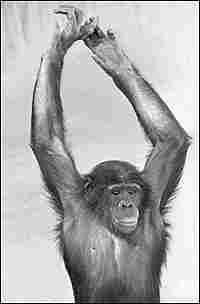 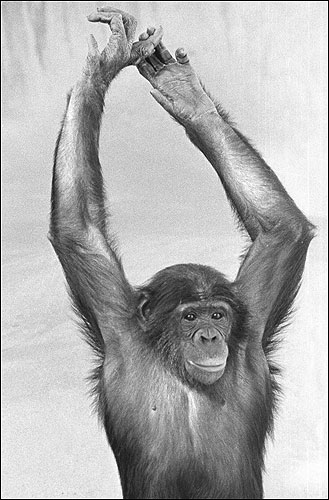 Watch a group of apes for a while and you'll inevitably see them use their hands to communicate that they want something from another — like food, or to play, or to be groomed, or to have sex.

Researchers at Emory University studied gestures used by two groups of chimps and two groups of bonobos. Chimps and bonobos are two separate species of apes; genetically, they are humans' closest relatives.

Researchers Frans de Waal and Amy Pollick videotaped hundreds of hours of the chimps and bonobos, which showed the primates using more than 30 distinct gestures such as waving a hand, raising an arm, dabbing with a finger or reaching out. The researchers linked each gesture with the context of what was going on at the moment.

Among those gestures, says primatologist Frans de Waal, is when a chimp extends an open hand when it sees another chimp with something it wants — food, for example.

"The open-hand begging gesture is also a universal human gesture used for begging for money and for food," de Waal notes. "And the apes use that in that particular context to beg for food."

But the researchers discovered that in a different situation, the open-hand gesture conveys something totally different.

"So let's say I have a fight with you, and my best friend is coming around the corner, and I go to my best friend and hold out an open hand," de Waal explains. "In that case, it seems to mean: Why don't you come help me? So the same gesture can be used for very different reasons."

The apes in this study also started using an old gesture in a completely novel situation.

"The bonobos they clap their hands sometimes while they groom each other," de Waal says. "There are no other bonobos in the world that I know of that do that."

And, de Waal adds, if one ape starts using a gesture in a unique context, others in the group are apt to copy it, leading to what's called "cultural transmission." The group develops its own dialect of gestures.

"In the chimpanzees, we have one group ... just one group, where the chimpanzees hold hands ...together above their heads when they groom each other with the other hand," de Waal says. "It's a very strange posture. It was developed by one female named Georgia, and she introduced her family members to it, and now all the chimps in the group are doing it."

The point: gestures are flexible — apes use them to communicate different things in different situations.

Language researcher Susan Goldin-Meadow from the University of Chicago, finds this flexibility intriguing. It suggests that gestural communication might be a precursor to human language.

Spoken language in humans is infinitely flexible, Goldin-Meadow says. So the flexibility of gestures may be the first primitive step toward the evolution of human language.

The research appears in the current issue of the Proceedings of the National Academy of Sciences.