Accessibility links
The Rise And Fall Of The Music Industry Rolling Stone contributing editor Steve Knopper chronicles the rise of the record industry — and its subsequent digital-age collapse — in his new book, Appetite For Self-Destruction.

Listen
The Rise And Fall Of The Music Industry

Rolling Stone contributing editor Steve Knopper chronicles the rise of the record industry — and its subsequent digital-age collapse — in his new book, Appetite For Self-Destruction.

Knopper's work has also appeared in Spin, Esquire, The Washington Post and Wired. 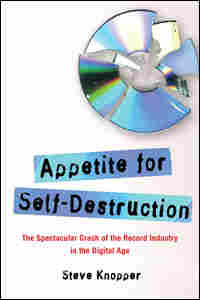 One man almost destroyed the music industry in the late '70s.

His name was Steve Dahl, and he was a roundish Chicago rock disc jockey with huge glasses and a shaggy bowl cut. In a maniacally nasal voice, he pioneered shock radio with his outrageous stunts. Once, during the 1979 Iran hostage crisis, he made random on-air calls to Iran and savagely mocked the first person with a foreign accent to answer. But the WLUP-FM DJ didn't find widespread recognition until he started smashing Donna Summer records in the studio, calling to arms a crazed group of followers he dubbed the Insane Coho Lips.

Dahl's hatred for disco ran deep and personal. He had taken a long road to his first Chicago job, dropping out of high school at age sixteen to work at an underground station near his home in La Cañada, California. He scored a few DJ gigs and married a young woman who'd called one night to request Leonard Cohen's 'Suzanne.' Naturally, they divorced. But when he was nineteen, less than a year after they'd split up, Dahl sat in his Subaru in front of her house, waiting all night for her to come out. This was the 1970s, so rather than having him arrested for stalking, she used personal connections to land him a morning-show job at a struggling station as far away as possible, in Detroit.

Almost overnight, Dahl turned his new station's ratings around. Big-time Chicago rock stations came calling, and Dahl accepted a job at WDAI, where he worked until it abruptly switched formats in 1978, dropping Led Zeppelin and the Rolling Stones and transforming into 'Disco 'DAI.' Pictures of the Village People started appearing in its promo ads. Dahl, a rock guy, had no choice but to quit. He accepted a morning-show job at another Chicago rock station, WLUP.

'I was just mad at my previous employer,' the now-white-haired, still-Hawaiian-shirt-wearing Dahl says. 'And Midwesterners didn't want that intimidating [disco] lifestyle shoved down their throats.' The antidisco campaign became the centerpiece of Dahl's morning show with cohost Garry Meier. They invited listeners to call in with their most hated disco songs; after airing a snippet, Dahl and Meier would drag the needle across the record and queue the sound of an explosion. The show was wildly popular. When the duo offered membership cards to a kill-disco organization, ten thousand listeners called the station within a week to sign up. Dahl took the show on the road, packing a suburban Chicago nightclub with a 'death to disco' rally. But what was so intimidating about people dancing in nightclubs? Why did rock fans in Chicago hate disco so much?

Because it sucked. That's why.

The songs, the dancing, the roller-skating, the disco balls, the heavy makeup — it was all so massive, so goofy, and over the top. Andy Warhol, Studio 54, Skatetown, USA, 'Disco Duck' — people were getting sick of this stuff. Besides, in order to make it with a lady, during the disco craze, a guy had to learn how to dance And wear a fancy suit! It was an outrage. (It's also possible these rock fans hated disco because black and gay people liked it, although nobody talked about that in public.) Whatever the reason, the backlash was inevitable. Disco needed to be destroyed, and Dahl appointed himself the pied piper for this enraged crowd. He found a compatriot in twenty-eight-year-old Mike Veeck, a failed rock guitarist. 'I loathed disco,' Veeck said later.

Veeck happened to have an excellent forum for what would become the decisive event in Dahl's campaign: Comiskey Park, home of the Chicago White Sox. He was the son of then-Sox owner Bill Veeck, a seventy-five-year-old baseball legend. (When he owned the Cleveland Indians, the elder Veeck made Larry Doby the first black player in the American League.) With his father's permission, Mike Veeck and Dahl hatched a plan. On July 12, 1979, the White Sox were to play a night doubleheader against the Detroit Tigers at Comiskey. In the days leading up to the game, Dahl announced on the air that White Sox fans could enter the park for just 98 cents if they brought a disco record. Sister Sledge, Bee Gees, 'I Will Survive' — it didn't matter. Everything would be obliterated.

The Sox averaged sixteen thousand fans at their home games that year, and they expected a few thousand people more than usual because of Dahl's stunt. They were completely unprepared for the army of fifty-nine thousand fans who showed up at the first game, carrying stacks of Bee Gees albums in their arms. Another fifteen thousand spilled along the surrounding South Side streets. They wore Led Zeppelin and Black Sabbath T-shirts, smashed bottles on the ground, smoked God-knows-what and chanted their almighty rallying cry: 'Disco sucks!' In the stands, sharp-edged records flew like Frisbees. The players were clearly unsettled. The Tigers' Ron LeFlore wore his batting helmet in center field during the first game.

Dahl was surprised. And nervous. He had prepared for a monumental failure, not thousands of minions waiting for him to lead. Wearing a green army helmet the size of a fishbowl and a matching jacket with wide lapels, looking like a hippie Colonel Klink, Dahl arrived in center field in a military Jeep between the two games.

'I didn't think that anyone would even show up,' Dahl says today. The Sox fireworks crew had rigged crates of records to explode with dynamite. He managed a few incomprehensible screams and his best anti-disco catchphrase from the radio (borrowed from a popular Second City TV sketch of the time): 'That blowed up real good!' It worked. Unwittingly, he rallied ten thousand fans to storm the field, climbing down the foul poles and turning the record explosion in center field into a raging bonfire. Sox officials hesitated to call in the cops for fear of stirring things up even further. They allowed fans to linger, shredding the dirt and turf beyond recognition. The senior Veeck and legendary baseball announcer Harry Caray impotently attempted to exhort people back to their seats over the loudspeaker. For thirty-seven minutes, Sox fans, disco haters, and all-purpose rabble-rousers united in a massive jamboree of public destruction.

One such Sox fan was a twenty-one-year-old South Sider who'd been sitting in the upper deck with six or seven of his friends from the neighborhood. One by one, they jumped over the barrier, then climbed fifteen feet down to the field. They were delighted to discover they could slide unmolested into third base and casually pick up bats and other paraphernalia their favorite players had left behind. The man was Michael Clarke Duncan, a stockroom employee at the Carson Pirie Scott department store downtown. You may recognize the name: He later broke into Hollywood and earned an Oscar nomination for his work as the hulking, doomed prisoner in The Green Mile, co-starring Tom Hanks. None of the many TV newsclips of the scene captures Duncan, which is surprising, given that he stood 6'5', wore a huge Afro, and was one of the few black people on the field.

Duncan was also perhaps the only disco fan on the Comiskey field that night. 'I loved disco music back then!' recalls Duncan, now fifty-one, a veteran of more than seventy movies, including The Island and Sin City. 'I had the four-inch-wide shoes, the belt buckle, the tight pants with no pockets.' He'd been to tons of all-night-dancing clubs, and his sister often let him borrow her stacks of Donna Summer records.

Dahl, who went to work the next morning expecting to be fired, wound up a bigger celebrity than ever. The week of the demolition, July 8 to 14, Chic's 'Good Times' hit the Top 10 — one of six disco songs to do so. On August 18, three disco singles were in the Top 10. By September 22, the number dropped to zero. 'It seemed pretty immediate. Bars that had gone disco immediately seemed to turn back into rock 'n' roll clubs. Live music began to thrive again,' Dahl says. 'All I know is that the Bee Gees and KC, of KC and the Sunshine Band, are still mad at me.'