Accessibility links
'Mortal Men' Creators Craft A Song For Obama Before Barack Obama's election, a group of musicians recorded and released a collection of 43 original songs, one for each U.S. president. Titled Of Great and Mortal Men, the three-CD set ended with the presidency of George W. Bush. Now, just in time for the inauguration, the creators are making their 44th song available for download here.

Listen to more presidents' songs and see artwork from Of Great and Mortal Men. 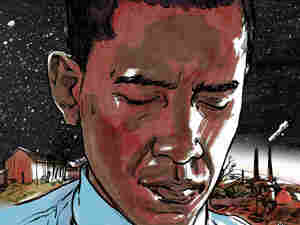 New artwork depicting Barack Obama was created as an addendum to the collection Of Great and Mortal Men. Rama Hughes hide caption 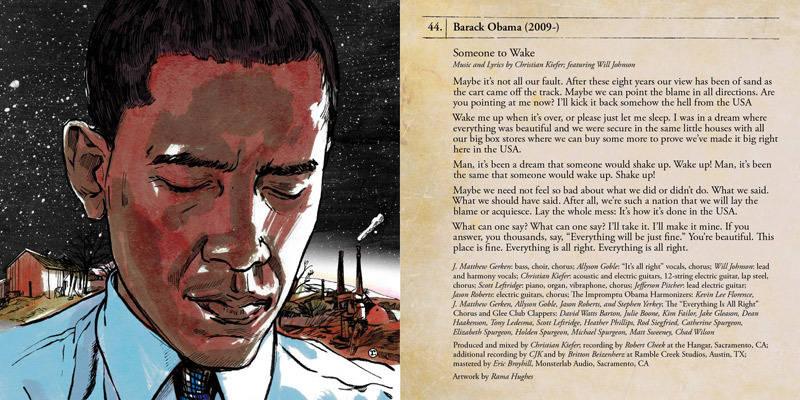 New artwork depicting Barack Obama was created as an addendum to the collection Of Great and Mortal Men.

Before the election of Barack Obama, a group of musicians recorded and released a collection of 43 original songs, one for each of the U.S. presidencies. Titled Of Great and Mortal Men, the three-CD set ended with George W. Bush. Now, just in time for the inauguration, the creators have completed their 44th song.

For the first 43 presidents, the songwriters behind Of Great and Mortal Men had hindsight on their side. But that wasn't an option this time.

"Because I didn't have an actual presidency to write about, the only thing I could write about was his effect on people," songwriter Christian Kiefer says of President-elect Obama. So Kiefer started out by exploring where the country has been.

Singer Will Johnson picks up the thought.

"It could have been easy to, after the last eight years, write a little more embittered type of song," Johnson says.

Johnson is best-known for his work with the Texas band Centro-matic. He volunteered to sing the lead vocals on Kiefer's song, joining a long list of indie-rock performers who made guest appearances on the original Of Great and Mortal Men. Johnson says the new song looks forward instead of whining about the past.

"That's something I've been guilty of for quite some time now," Johnson says. "I'm tired of feeling that way, personally. You get tired when you're angry."

It's more than three minutes into the song before the character of Barack Obama finally makes an entrance, singing, "Everything will be just fine."

Kiefer says it might be premature to suggest that Obama will be able to fix all the problems confronting the country. A history teacher in Sacramento, Calif., he also has five children of his own, ranging in age from 2 months to 14 years. In his song, Kiefer says Obama is acting like a grownup.

"He says everything is all right in the same way that you might hold a child in your arms who has an ouwie," Kiefer says. "And you stroke that child, and you say everything's all right. That's essentially what I think what Obama has done for us as a nation — taken this basically broken child and said, 'Hey, come on, everything's good. We're tough, we can do this. Let's move forward.' "

For a while, Kiefer says he considered leaving the song untitled — an acknowledgment of the open questions facing Obama once he takes office. But in the end, he decided to call it "Someone to Wake."

Woe Is a Spoon-Shaped Heart

Accompanying the three-CD set is a 106-page booklet with essays and original artwork covering all 43 presidents. 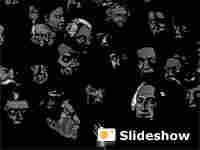 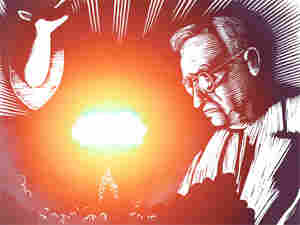 In just 27 days, Americans go to the polls to pick the 44th president of the United States. While some of the first 43 have become larger-than-life figures, others are all but forgotten. But songwriters Christian Kiefer, Jefferson Pitcher and Matthew Gerken, with the help of many stalwarts of indie rock, look to shed light on the lives and quirks of these men. They've composed original songs and music in a new collection called Of Great and Mortal Men, which features 43 songs spanning three CDs and more than 220 years of American history.

Most songs about American presidents are written about the wanna-bes: candidates on the campaign trail. But instead of writing about John McCain or Barack Obama, these songwriters studied up on past presidents — from greats like Lincoln to the not-so-great, like the 31st president, Herbert Hoover.

"These are men who get up in the morning and shave, or don't shave; who have wives and families and fathers themselves," says California-based teacher Kiefer. "And whose lives are as similar to our lives as they are different."

The trio started working on the project in February 2006, when Kiefer's friend Pitcher, a songwriter, floated the idea of writing about all the presidents as part of an annual event for amateur musicians called February Album Writing Month.

"We laughed about it at first," Pitcher says. "And then we realized this was an interesting way to examine American history. So what started maybe as something we thought was kind of funny became pretty serious pretty quickly."

Pitcher and Kiefer recruited a third songwriter, Gerken, and split up the presidents more or less evenly. They each drew a mix of the famous and the forgotten. For example, Kiefer got Rutherford B. Hayes and Abraham Lincoln.

"Writing some of those tunes about the presidents no one's ever heard of was pretty liberating," Gerken says. "The pressure's off on those. You can just write something pretty interesting, and it'll be informative to anybody."

In some cases, their songs take unexpected twists: In one, the songwriters try to get inside the mind of William McKinley's assassin, Leon Czolgosz.

Kiefer, Pitcher and Gerken became so engrossed by presidential trivia that they didn't want to stop when February Album Writing Month was over. So they convinced a record label to release their songs. Kiefer says they invited their friends to contribute original artwork and play on the recordings.

"We were a bit worried that the average listener out there might not be too excited about listening to three songwriters they had never heard of singing songs about presidents for three hours and 20 minutes," Kiefer says. "That would be a hard sell for me."

Such respected indie-rock performers as Califone, Smog and singer Alan Sparhawk from the band Low — as well as Denison Witmer, who sings about Harry Truman — all contributed to the project. In the end, more than 50 musicians participated. And perhaps that's not surprising, according to folk musician and radio host Oscar Brand. He's recorded several albums of campaign songs, and he says that writing music about the presidents is a tradition as old as America itself.

"This country is a singing country," Brand says. "When it comes to elections, there's no lack of these songs."

But not all of those songs have passed the test of time. Brand says that the songs on Of Great and Mortal Men violate some of the most basic rules of political songwriting. For one thing, they don't use familiar tunes.

For another thing, Brand says that the most memorable campaign songs are blatantly partisan in nature. The songwriters on Of Great and Mortal Men say they tried to keep their politics out of their songs, though Kiefer and Pitcher admit that they weren't always successful.

"Jefferson [Pitcher] leans leftward of Friedrich Engels and Karl Marx," Kiefer says. "They're to the right of him on the political spectrum."

Gerken adds that the more recent presidents were especially challenging. Sometimes, the solution was to laugh, as in the song "A Great Beam of Light," in which Jimmy Carter gets abducted by aliens.

"I don't have much of a stake in the sugar tariff wars of the 19th century," Gerken says. "It's easy to be objective about that sort of thing. But when you get into the '80s — Reagan, Bush and so forth — it's definitely hard to distance yourself."

The songwriters behind Of Great and Mortal Men hope that history teachers will use the songs in the classroom as a way to think about history as a living text. Pitcher, a former teacher himself, noticed that many of his students had an unhealthy attachment to Wikipedia.

"It's problematic," he says. "But at the same time, we have a real potential to see a history that's written more by the people. I thought this project would be a way for them to approach the American presidencies in a totally different light."

Five points if you can explain why it took only 42 men to make 43 presidents. You'll have to look that one up. As for the 44th, the songwriters say they'll write one more song and post an MP3 sometime after Nov. 4.