Accessibility links
George Clinton Keeps The Funk Alive After 67 years, the dreadlocked king of funk can still bring the house down. Clinton's new album ditches his signature Funkadelic style for Motown-influenced covers of old love songs. Here, he discusses his life on the road with some special guests, including Sly Stone.

One Nation Under A Groove

Give Up The Funk (Tear The Roof Off The Sucker) 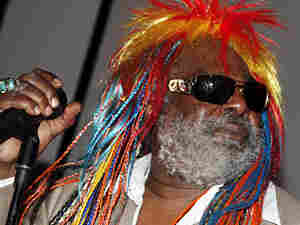 When you think of the Motown sound of the 1960s, you think of clean-cut acts like The Temptations, The Four Tops, and The Supremes. That all changed when George Clinton came along.

It was Clinton, with Parliament-Funkadelic, who injected extraterrestrial craziness into R&B and funk music way back when. Now, at the age of 67, he still spends most of the year on the road.

Anyone who ever got down at a George Clinton show won't recognize the three-ring circus master of '70s funk on much of his latest album, George Clinton and His Gangsters of Love. Despite guest appearances by the Red Hot Chili Peppers and many of his old P-Funk compatriots, the latest CD is mostly straight covers of old love songs.

That may sound weird, until you find out that George Clinton started out as a doo-wop singer.

"The Monotones lived about 10 blocks from me. Frankie Valli and the Four Seasons about four blocks," Clinton says of his Motown roots. When Clinton started hearing English bands like Cream and The Rolling Stones offer a new take on American roots music, he decided to jump the doo-wop ship for the next wave.

"It was at the end of Motown's reign, and we started seeing music coming back from England to the States," he says. "I said, 'Wait a minute, we're going in the wrong direction.' So we just made a quick turnaround. Threw our suits away. Got some jeans with holes and patches in 'em and started becoming hippies."

Tearing The Fabric Of Funk

The '70s and early '80s were the most creatively productive years for George Clinton and Parliament-Funkadelic. They tugged and tore at straight funk and rock music until it was distorted into long, funky streams of consciousness, with space rock, prog rock, psychedelic and even classical touches all thrown in. Most of the tunes he performs live still come from that period.

Clinton's bands became huge conglomerates of musicians that he collected over time. At his recent L.A. show, there were about 20 people onstage, many of whom have been playing with Clinton since the '70s. He says it's like a big musical family, the way Motown once was.

"They've been in the group forever," Clinton says of his band mates. "But it's about the Motown family, too. We just kept that going from where they stopped at."

Clinton and his musical family have kept Motown alive, and not just onstage. Backstage in his touring Winnebago, an endless stream of musicians and tour personnel comes wandering through. There's music director Gary Shider, aka "Diaper Man" — so called because, despite being well into his 50s, he still wears nothing but a diaper onstage every night. There's also singer Gene "Poo Poo Man" Anderson; he's weighed down by a mountain of bling. Even the reclusive legend Sly Stone appears incognito in a kind of ninja costume.

"All you cats and kitties out there whippin' and wailin' and jumping up and down and suckin' up all that old juice and hippin' and tellin' each other who the greatest cat in the world is," Stone says. "And I'm going to put a cat on you that was the coolest, strongest, sweetest cat that ever stomped on this sweet, swingin' sphere. Check this out: George Clinton, yeah."