Accessibility links
Where Does The Oath Of Office Come From? Every incoming president back to George Washington has spoken the 37 words in the oath of office. The oath is written into the U.S. Constitution — in fact, one expert says it's the only sentence in quotes in the entire document.

Listen
Where Does The Oath Of Office Come From? 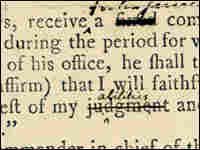 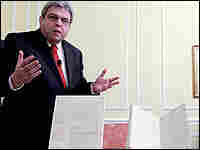 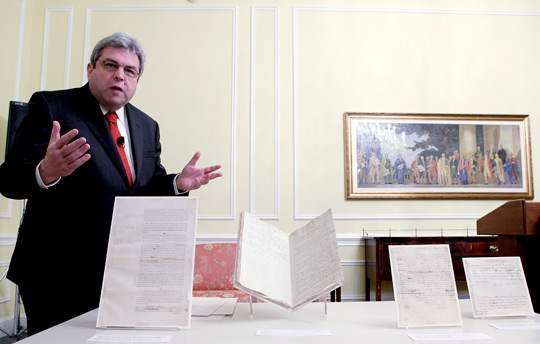 Every incoming president back to George Washington has spoken the 37 words in the oath of office:

But where does the oath come from?

Marvin Pinkert, executive director of the National Archives Experience, says, "If I went up to 12 people on the street and said, 'Where would you find the instructions for the oath of office for the president of the United States?' I doubt that many of them would tell me, "It's actually written into the Constitution.'"

For a document that lays out general principles and avoids getting into too much detail — which is why Pinkert says we've been able to argue about it ever since — the oath is the one section that's really specific.

"It's the only sentence in quotes in the entire Constitution," Pinkert tells NPR's Steve Inskeep.

Although the oath is short, it took several takes for the founding fathers to get the final wording down. Delegates at the Constitutional Convention in 1787 struggled to come to terms with what the new office of the president of the United States actually meant, because there weren't a lot of precedents to go by.

Pinkert points to original documents displayed at the archives; they shine a light on what delegates might have been thinking as they crafted the oath. For example, the first printed copy of the draft Constitution contains suggested revisions by Washington and others.

"Among those changes," Pinkert says, "is to cut out the word 'judgment' ... and replace it with the word 'abilities,'" which was later shortened to "ability."

This ensures that the Constitution is supreme and that the president executes laws accordingly.

That the president is treated as a citizen under the Constitution rather than as the supreme authority of the land says something special about the nature of the U.S. government and the foresight of the founding fathers, Pinkert says.

Their ideas on presidential power are reinforced when the oath is publicly administered every four years, even when a president is re-elected.