Accessibility links
Battle Brewing Over Holder's Clinton-Era Decisions The GOP is lining up witnesses for Thursday's confirmation hearing to question U.S. attorney general nominee Eric Holder on his role in pardons and clemencies when he was deputy attorney general under the Clinton administration. 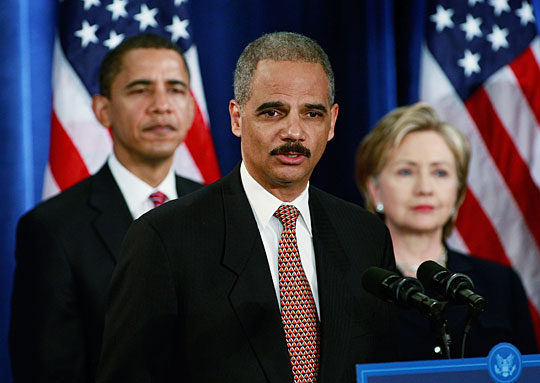 Despite strong bipartisan support from the legal and law enforcement community, U.S. attorney general nominee Eric Holder can expect some roughing up Thursday when his confirmation hearing opens before the Senate Judiciary Committee.

Ranking Republican Arlen Specter of Pennsylvania has promised to quiz Holder about his role in decisions made by the Clinton Justice Department during the four years he was deputy attorney general — from President Clinton's last-minute pardon of fugitive financier Marc Rich, to clemency and sentence reductions granted to members of a violent Puerto Rican nationalist group.

But committee Chairman Patrick Leahy, a Democrat from Vermont, has launched a full-court press to beat back criticism of President-elect Barack Obama's choice to be the nation's top law enforcement official.

On Tuesday, Leahy challenged Specter to justify his objections in light of the unwavering support he gave to Alberto Gonzales after President Bush nominated the now-discredited former attorney general to the post.

"If [Specter] could strongly support Mr. Gonzales, who turned out to be a disaster as attorney general, I would think that he would be very happy to support Eric Holder," Leahy said. He later referred obliquely to Specter as a "spear carrier" for Gonzales and pondered whether it was coincidence that Specter's criticisms of Holder echoed those of GOP political operative Karl Rove.

Leahy was joined on Tuesday's call by two prominent Republicans: former Sen. John Danforth, who also served as U.N. ambassador, and former three-term Congressman Asa Hutchinson, who once headed the Drug Enforcement Agency and was a top official at the Department of Homeland Security. Both gave Holder unqualified endorsements.

They are among a growing circle of Republicans who have gotten behind Holder. Their ranks include former Judiciary Committee Chairman Sen. Orrin Hatch of Utah, who remains a committee member; former Attorney General William Barr, appointed by President George H.W. Bush; and Victoria Toensing, who was a deputy attorney general in the Reagan administration.

It is telling that Democrats have worked to line up such significant public and across-the-aisle support for Holder, who would be the first African-American attorney general. His nomination at first blush appeared to be on a glide path, even despite early criticism about his role in the Rich pardon. (In an opinion to then-President Clinton, Holder said he was "neutral, leaning toward favorable" on the controversial pardon, which the president executed just hours before leaving office.)

Those who know Holder from his days at the Justice Department describe him as an unflappable, fair leader whose credentials — prosecutor, judge, criminal defense attorney, deputy attorney general — make him, on paper, better qualified than at least the past three attorneys general. Holder has been in private practice since 2001 and served as an adviser to the Obama campaign.

But the nomination's course was clearly altered last week, when Specter delivered a blistering speech on the Senate floor in which he called into question Holder's ability to "say no" to his boss if law and judgment dictate.

Specter questioned why Holder, as deputy attorney general, opposed naming a special prosecutor to look into campaign finance allegations that then-Vice President Al Gore was raising money in the White House. And the senator took aim at Holder's role in securing clemency in 1999 for members of Puerto Rican separatist groups, including four members convicted of being involved in robbing a Wells Fargo office in Connecticut of $7.2 million. Some of that money was traced to Cuba, according to published reports. In all, 16 radical Puerto Rican nationalists belonging to two groups involved in bombings, murders and robberies received offers of clemency that Holder recommended.

"The actions of Deputy Attorney General Holder were very extensive in what eventuated in the granting of clemency," Specter said.

Clemency was opposed at the time not just by Specter, but also, he noted, by Leahy, as well as the FBI and two U.S. attorney's offices. Many critics saw it as a political move by Clinton intended to help his wife's standing with the Puerto Rican community in New York, where she was running for Senate.

Republican witnesses include two with personal interest in the Puerto Rican clemency issue: Joseph Connor, the son of a man killed in a 1975 New York City bombing attributed to the violent Puerto Rican nationalists, and Richard Hahn, a former FBI agent who spent more than a dozen years investigating one of the two radical groups. A third GOP witness is a pro-gun attorney.

Leahy charged that Specter and others may be trying to use Holder's confirmation as a "backdoor way to go after Bill Clinton."

"Don't make this a hearing at which you're trying to get to Bill Clinton, who's no longer in office," Leahy said.

But with his most public acts stemming from his time as deputy to Clinton's attorney general, Janet Reno, Holder will have some tough questions to answer.

Still, no one is predicting that his nomination will fail to pass out of Leahy's committee with a recommendation for approval by the Senate.

Specter says, however, that Holder will "have his day in court, so to speak."