Accessibility links
Patrick McGoohan, TV's 'Prisoner' Number Six Emmy-award-winning actor Patrick McGoohan died Tuesday in Los Angeles at age 80. McGoohan was best known at the creator and star of the 1967 British series The Prisoner, in which he played "Number Six," a former spy trapped in a mysterious and sinister village. 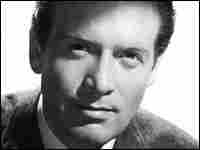 In addition to starring in the series, Patrick McGoohan wrote and directed several episodes of The Prisoner. Authenticated News/Courtesy of Getty Images hide caption

View Episodes Of 'The Prisoner'

McGoohan was an accomplished stage actor who starred in a number of films, but he is best remembered for The Prisoner, the innovative television series he helped create in the late 1960s.

The Prisoner was remarkable for its time. Its opening sequence, which featured McGoohan speeding into London in a Lotus Seven, was more like a film than TV.

In that sequence, McGoohan's character — known only as "Number Six" — exits the car, stalks down a dark tunnel and throws open massive double doors. He pounds on a desk, slams down a piece of paper and storms out.

But insubordination has a price: McGoohan's photograph is X-ed out and his file dumped into a drawer labeled "reassigned." The character is then gassed and wakes up in a bucolic, empty village.

All of this happens before the name of the show even appears onscreen. Film critic David Thomson says it was remarkable for commercial television in Britain in the late 1960s.

"It was an extraordinary show, which I think led the way ... in showing just how powerful, how profound a TV series could be. I think it's still breathtaking," Thomson says. "It's as if James Bond material had been given to Harold Pinter to write, to some extraordinary, surreal designer to design and Hitchcock to direct."

A Man Without A Country

Patrick Joseph McGoohan was born March 19, 1928, in Astoria, Queens. His parents returned to Ireland when he was 6 months old and later moved to England.

Thomson says that when McGoohan first appeared onstage in England, he was thought of as an Irish actor: "He sort of came from not anywhere in particular. ... He was very much his own man."

Early in his career, McGoohan starred in the popular British TV series Danger Man, which was rechristened Secret Agent by the American network CBS.

Though the show was a hit, the actor felt constrained by the format and detested the violence. When he was approached to do a follow-up, he insisted on setting his own terms. The resulting series was the The Prisoner, for which McGoohan co-created, starred in and also wrote, directed and produced a number of episodes.

His character in The Prisoner spent all 17 episodes trying to figure out where he was — and trying to escape the candy-colored village where everyone was watched by hidden cameras.

McGoohan was also a noted stage actor. Thomson, who saw the actor in a London production of Henrik Ibsen's Brand in the 1950s, says it was one of the greatest performances he has ever seen onstage. But he also says McGoohan's insistence on doing things his way cost him.

"This was a man who very easily, I think, could have been up there with Olivier and Gielgud in terms of being that famous an actor," Thomson says. "He was handsome. He had a great voice. He was a tremendous actor. But as he admitted himself, he was difficult. He wanted to do things his way and he had his own vision. And that meant he did much less."

Even before McGoohan became a TV star, he made the transition from stage to screen, starring in the classic 1962 jazz film All Night Long alongside Dave Brubeck and Charles Mingus, among others. More recently, McGoohan starred opposite Mel Gibson in Braveheart, playing the evil King Edward Longshanks.

Some versions of this story said that the TV show "The Prisoner" opened with McGoohan driving a Formula One race car. In fact, the car was a Lotus Seven.