Accessibility links
Geithner Tax Woes Examined Revelations Treasury Secretary-designate Timothy Geithner did not pay some taxes when he worked for the International Monetary Fund may have roots in the way the IMF pays its American workers. Donald Williamson, chair of the accounting department at American University, offers his insight.

Revelations Treasury Secretary-designate Timothy Geithner did not pay some taxes when he worked for the International Monetary Fund may have roots in the way the IMF pays its American workers. Donald Williamson, chair of the accounting department at American University, offers his insight.

The confirmation hearing for treasury secretary nominee Timothy Geithner has hit a snag. The Senate Finance Committee has postponed that hearing until next Wednesday, the day after the inauguration. The committee chairman, Max Baucus, says it's a given that Geithner will be confirmed, but Republicans on the committee forced the delay after revelations that Geithner failed to pay $34,000 in self-employment taxes when he worked at the International Monetary Fund or IMF. He has since paid those back taxes plus interest.

We've called on accountant Donald Williamson to walk us through the ins and outs of taxes and the IMF, and how what the Obama team is calling a common mistake might have happened. Williamson is the chair of the accounting department at American University. Welcome to the program.

BLOCK: And help us understand this, IMF employees receive a W2 form for tax purposes, but they're considered self-employed. Why is that?

Professor WILLIAMSON: That's because the International Monetary Fund, being an international organization, by statute is exempt from withholding tax and the need to pay employment tax on their U.S. citizens who are employees. So then, the law then requires the U.S. citizen, who is an employee, to file on their own to pay the equivalent of what a regular U.S. employer would have withheld for Social Security and Medicare.

BLOCK: And if I understand this right, IMF employees are paid extra to more or less cover these tax payments. On their paystub, you'll see the line self-employment tax allowance.

Professor WILLIAMSON: That's right. There is, what's called in the trade, a gross up because the employee is paying both the employee's half and the employer's half of the employment tax. The bank or the IMF grosses up, as they say, the wage of the U.S. person to make them whole.

BLOCK: How common a mistake do you think this is for employees like Mr. Geithner, IMF employees, for example?

Professor WILLIAMSON: Well, that's an interesting question. I would have thought that someone in Mr. Geithner's role and in his position would have been aware that this responsibility was upon him, particularly since he acknowledged that in a statement that he signed, authorizing IMF to gross up his wages. That said, those returns that he did were self-prepared, and sometimes it's difficult to properly prepare them and a mistake was made.

BLOCK: Yeah, he did do these himself for some years using, I guess,a tax program on the computer. Would a program like that typically kick out to you, and say, hey, you forgot to pay your self-employment tax?

Professor WILLIAMSON: Yes, it would have. Even the standard things that you'd buy at a drug store would have given you what we call them in the trade a diagnostic that when you went to print the return, they would have said, hey, wait a minute, there's no employment taxes being withheld.

BLOCK: He also apparently - Mr. Geithner also used a tax preparer for two of the years in question and it was the years that he was later audited for. And according to talking points from the Obama team, his accountant advised him in writing that he was exempt from self-employment taxes on his IMF income.

Professor WILLIAMSON: Well, if that's the case, that's his pass because I could understand a lay person not appreciating some of these technical rules that the IMF and the Internal Revenue code have. But if the accountant did give an opinion, I can understand Mr. Geithner accepting that opinion and not paying the tax.

BLOCK: Do you think the take-away lesson here is that, look, even a man who is likely to become treasury secretary has problems understanding the tax code.

Professor WILLIAMSON: The take-away on this, Melissa, as one who does tax returns for a living, is that you need to pick your tax return preparer very carefully.

BLOCK: Well, Professor Williamson, thanks so much for talking with us.

Professor WILLIAMSON: Thank you very much. 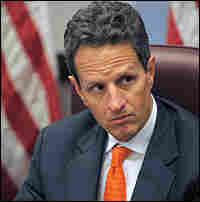 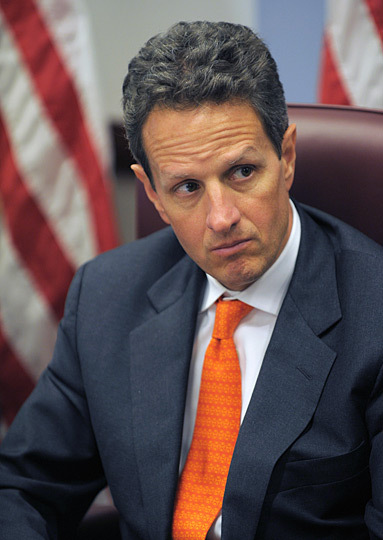 Timothy Geithner, President-elect Obama's pick for Treasury secretary, watches as Obama speaks after a meeting with members of his economic team last week.

Timothy Geithner, President-elect Obama's nominee for Treasury secretary, failed to pay tens of thousands of dollars on his tax returns and employed a housekeeper whose legal immigration status lapsed while working for him. That's according to the Obama transition team and documents released Tuesday by the Senate Finance Committee, which is vetting Geithner's nomination.

Geithner admitted to making a mistake in his personal tax returns from 2001 to 2003. He learned of the error on his returns back in November, when he was being vetted for possible nomination to the Obama Cabinet. The mistake resulted in a $34,000 shortfall in his taxes.

The Obama transition office says the delinquent taxes have been paid. Obama spokesman Robert Gibbs describes it as a common mistake on a tax form.

Despite the glitch, Gibbs said that Geithner is the right person to help lead the economic recovery during challenging times.

"He's dedicated his career to our country and served with honor, intelligence and distinction," Gibbs said in a statement. "That service should not be tarnished by honest mistakes, which, upon learning of them, he quickly addressed."

The taxes in question related to Geithner's employment with the International Monetary Fund from 2001-2003. The IMF doesn't withhold money for U.S. taxes, but it adds the approximate amount to the employee's pay, and then the employee has to forward tax payments on to the IRS, according to the papers released by the Senate.

During his time with the IMF, Geithner was required to pay both Social Security and Medicare taxes for himself as both employer and employee. It appears that Geithner forwarded some tax payments but not others. For instance, he owed Social Security tax to the U.S. government. He did forward the employee portion to the IRS, but did not send the portion normally paid by the employer, which he was also supposed to do.

The IRS had previously examined Geithner' taxes for 2003 and 2004, according to the documents, and he had agreed to pay additional amounts, but the IRS waived penalties. The records show some other adjustments and amended returns filed by Geithner for other years, too.

Geithner is currently president of the Federal Reserve Bank of New York.

Separately, Geithner employed a part-time housekeeper whose immigration papers expired in the last three months she worked for him. She later received a green card restoring her legal status. Geithner apparently paid all the required employment taxes.

It's unclear how the problems with his tax returns will affect Geithner's chances for confirmation. Senate Finance Committee Chairman Max Baucus, a Montana Democrat, and ranking Republican Charles Grassley of Iowa issued a joint statement Tuesday saying the panel would continue to investigate the matter. But given that the economy is in the tank and that Geithner — considered a financial whiz by many — has an otherwise sterling reputation, the revelations may not be significant enough to derail his prospects of becoming the next Treasury secretary.

Still, a new date has not been set for Geithner's confirmation hearing, which had been scheduled for Thursday but was postponed.

With reporting by Don Gonyea, Maria Godoy and John Ydstie.