Accessibility links
Clearing Things Up: Vicks' Effectiveness In Kids A new study raises concern among some scientists that Vicks VapoRub, a popular over-the-counter cold remedy, may cause more harm than good, especially among children. Doctors recommend turning to traditional household remedies to ease symptoms and letting the cold pass naturally. 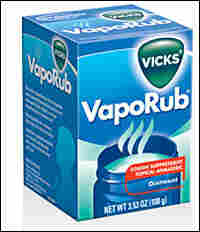 "A recent article in CHEST® describes animal studies prompted by a single case report. The animal findings are of unknown human clinical relevance. The safety and efficacy of Vicks VapoRub has been demonstrated in multiple human clinical trials, which have included more than 1,000 children ages 1 month to 12 years."

During this winter's cold and flu season, parents may be more confused than ever about how to ease the symptoms of their children's colds. Experts say cough and cold formulas don't work and may even be harmful for children under 4. Now, a new study released this week raises concern about the safety of the popular ointment Vicks VapoRub.

Researchers at Wake Forest University examined the safety of Vicks VapoRub after an 18-month-old girl was brought to a hospital emergency room with breathing problems. Doctors speculated it might have to do with Vicks, a menthol and eucalyptus salve that had been rubbed under her nose.

To test their theory, the scientists looked at how the ointment affected ferrets, which have airways similar to humans. Scientists concluded that application of Vicks VapoRub did the opposite of what was expected — it caused more, not less, nasal congestion and inflammation.

But Ian Paul, a pediatrician at Penn State Children's Hospital, takes issue with the study because it was based on the case of only one child and just 15 animals. Paul is leading his own study on the effectiveness of Vicks in children — this time with 150 participants.

Procter & Gamble, which makes Vicks VapoRub, has some evidence that the ointment might help adults, but there are no recent studies among children. The company is funding Paul's research, but Paul says the company has agreed to publish the findings even if they're negative. He hopes to have some answers by next year.

Until then, Paul says, parents should heed current recommendations from both the federal government and the industry: Don't give kids over-the-counter cough or cold formulas if they are 4 or younger. That includes cough suppressants, antihistamines, decongestants and expectorants. Studies show the medications don't work and, in rare cases, can cause severe side effects.

"[Side effects] can range from mild things like excessive drowsiness, to things like more severe heart rhythm abnormalities and, in certain overdose cases, can even be fatal when people take too much," Paul says.

So what can parents do?

"Wait it out," says Daniel Frattarelli, a pediatrician at Oakwood Hospital in Dearborn, Mich. "Let your child know the cold will go away in a few days. And in the meantime, use home remedies."

"Keeping them well hydrated. Some people find humidifying the air will also help loosen up secretions and help kids clear gunk out of noses," Frattarelli says. "Honey has been shown to help also decreasing the frequency of cough as well."

He cautions that babies less than a year old should not be given honey because it can be dangerous for them. As for Vicks VapoRub, Frattarelli says he'll wait to see the conclusions of Paul's study.

Until then, the Vicks label is clear: Vicks VapoRub should not be used on children under 2 or in the nostrils. The label says it can be rubbed on the chest, throat or achy muscles.