Accessibility links
Saving Folk History, One Recording At A Time A small group of musicians is trying to preserve American folk music. These players aren't professional archivists or producers; their old, rare cassette and reel-to-reel tapes are scattered across the country. Members of the Field Recorders' Collective want to introduce these recordings to a new generation of musicians online.

Listen
Saving Folk History, One Recording At A Time

Norman Edmonds & The Old Timers, 'May I Sleep In Your Barn Tonight Mister'

Wade Ward, 'Dance All Night With A Bottle In Your Hand' 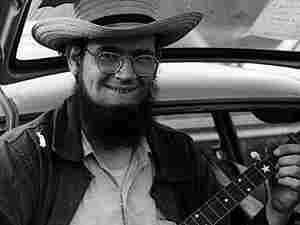 Judy Hyman plays fiddle in a band called The Horse Flies. In her living room in Ithaca, N.Y., there's a pine-wood dresser right next to the couch. It's not for shirts and sweaters — this used dresser holds hundreds of precious cassette tapes, an archive of rare recordings that spans more than three decades. She recorded many of them herself; the rest were gifts from other musicians and collectors.

Hyman's treasures include recordings of Jim Bowles and Harold Hausenfluck — both fiddlers, from Kentucky and Virginia, respectively. Their music is called "old-timey." It's what came before bluegrass.

This music has been passed down from generation to generation, and from musician to musician. There are versions of songs particular to different regions, and even to different families. Recordings of these very particular performances — made in living rooms, kitchens and on front porches and called "field recordings" — are essential tools for anyone who wants to play this type of music.

"When you go down South and try to study with someone, they don't say, 'Well, you know, the first measure you play such and such,' " field recorder Ray Alden says. "They just play the tune."

Alden is a banjo player, a friend of Hyman's and a retired math teacher. One of the people he studied with was Fred Cockerham, a musician from Surry County, N.C. During his summer vacations, Alden scoured the South, looking for musicians.

"Unless you've got photographic memory," he says, "you have to record it, take it home, try to play, and then try again and just keep trying and trying until finally, hopefully, you get it."

A few years ago, Alden began to wonder what he was going to do with his collection of field recordings. He considered giving his collection to the Library of Congress, or to a university. However, Alden says he worried that they'd be hard for musicians like him to access, and that they'd gather dust lying on a metal shelf. Besides, what librarian in his or her right mind would let someone into the stacks with a banjo or a fiddle to learn a rare ballad or breakdown?

"If the people who are really interested and want to play it or hear it, have difficulty assessing it, what good is that?" Alden asks.

Alden talked to a few of his friends, like Hyman, and together they came up with an idea: Why not preserve their old recordings themselves? They call their ad hoc group The Field Recorders' Collective. They decided to use the Internet to bring this little-heard music to a new audience. Every year, they remaster and release 10 to 15 old recordings. Using their home computers to edit audio, the collective then packages every CD in a simple cardboard sleeve. Liner notes are available online, with photos.

Tapes come from backyard jam sessions, house concerts and music festivals from all over the country. The majority of the music probably wouldn't interest most commercial labels.

A few years after he dropped out of Harvard in the 1950s, Field Recorders' Collective member Peter Hoover made a tape of musicians Wade Ward, Uncle Charlie Higgins and Dale Poe. Doing his best to make them feel comfortable, Hoover shared meals with them. He listened to them play music in their living rooms, and refrained from dragging out his suitcase-sized reel-to-reel recorder until the wee hours of morning.

"You have to sit, and you have to visit, and you have to explain yourself and say, well, 'You know, I want to learn this music, and I hear you play it. Could you play me a few tunes?' " Hoover says. "And after we got through that, I said, 'Well, you know, could I record some of this stuff?' "

Today, Hoover, Alden and the other members of the Field Recorders' Collective — almost two dozen of them — do everything as inexpensively as they can. After they cover their costs, they send the rest of the money to the families of the musicians they recorded. The Field Recorders say they hope other musicians can learn from the men and women whose sounds are preserved on the CD's — many of them gone — who played the music of their grandparents and whose children still carry on that folk tradition.