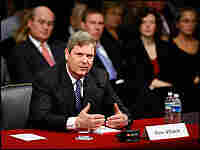 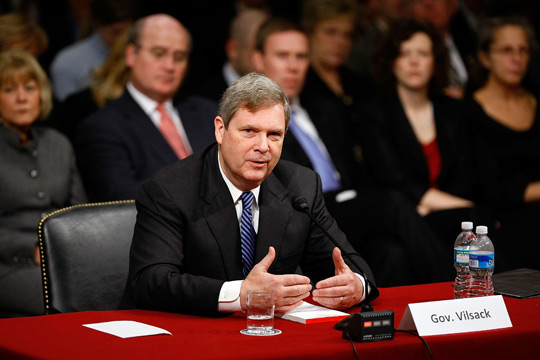 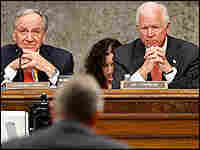 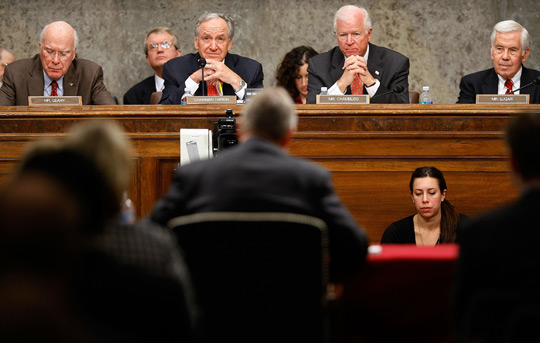 Former Iowa Gov. Tom Vilsack appears destined for easy confirmation as Secretary of Agriculture, maybe even on the same day Barack Obama is inaugurated as president.

"We look forward to a speedy confirmation," Iowa Democrat Tom Harkin, chairman of the Senate Agriculture Committee, said after Vilsack's confirmation hearing Wednesday. "I'm sure," he said, "that it will take place next Tuesday," the day Obama takes the oath of office.

"I can tell you from my long history with Tom Vilsack, he knows production agriculture [and] what's needed to promote profitability and a better future, including for beginning farmers and ranchers," Harkin said at the hearing.

The welcoming tone contrasted sharply with some of the reactions to Obama's choice. Some organic food groups circulated petitions opposing Vilsack's nomination. They complained about his support of genetically modified food.

That issue didn't come up at Vilsack's confirmation hearing. In fact, there were no tough questions. The senators in attendance seemed more intent on reminding Vilsack about the Agriculture Department issues their constituents care about. They wanted what Arkansas Democrat Blanche Lincoln described as "a champion."

"We're looking for someone who is going to really recognize the hard work, the dedication [and] the pride that exists in all of our farm families," Lincoln said.

Several senators wanted to be sure Vilsack looks beyond the corn and soybeans of Iowa when he implements farm policy. Kansas Republican Pat Roberts urged caution when limiting farm subsidies, which is something the president-elect has promised.

"These programs are indeed necessary," Roberts said. "We must be fiscally responsible and frugal, but [subsidy programs] only represent a mere one-quarter of 1 percent of federal spending."

Vilsack obliged with a careful response.

"I think it's incumbent upon [the U.S. Department of Agriculture] to recognize the importance of that farm safety net," he said. "I think it's also important to make sure that people who deserve to get support are getting that support, and folks who don't deserve to get it aren't getting it."

Obama has criticized subsidies going to wealthy and foreign-based farm and ranch owners who do not seem to qualify for federal support.

Vilsack also promised to resolve once and for all a long-standing Agriculture Department dispute over discrimination against black farmers.

"Discrimination in any form will not be tolerated in this department," Vilsack vowed, as he also made a commitment to clear a backlog of civil rights complaints leveled against the agency.

The former Iowa governor, mayor and small-town lawyer also pledged to focus on nutrition in federal food programs, international trade and markets, food safety, alternative fuels, family farms and suffering rural economies. He acknowledged the Agriculture Department's role in federal forest management, and said he'd like better management of forest and wildfire policy so that firefighting does not drain the budgets of other forest programs.

Critics of federal farm policy had hoped for an agriculture secretary who would transform the agency into the "Department of Food" or the "Department of Rural Affairs." They wanted less emphasis on industrial and corporate agribusiness, and more emphasis on locally produced food, chemical-free food products and rural economic development unrelated to farming.

Vilsack did not signal dramatic change. And he was the only one in the hearing room to use the phrase "if confirmed." Everyone else seemed to consider confirmation a done deal.