Accessibility links
Former White House Butler Reflects On His Service Lynwood Westray recalls poignant moments from his 32 years in the White House serving eight presidents, from John F. Kennedy to George H.W. Bush. The 82-year-old says he wishes he was 30 years younger so he could work for Barack Obama. 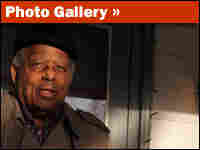 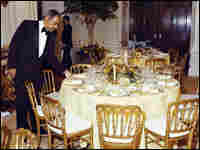 Lynwood Westray, who is now 82, sets a table in the White House in June 1976. "The butler was an honorable job; it was a good job," he says. "And the benefits, they were there." Courtesy Lynwood Westray hide caption

Lynwood Westray, who is now 82, sets a table in the White House in June 1976. "The butler was an honorable job; it was a good job," he says. "And the benefits, they were there."

Slaves helped construct the building. Black men and women worked in the White House as servers, cooks and maids, sometimes as property of U.S. presidents.

From that shameful past arose a proud tradition: the Butler Corps. Until recently, almost all the White House butlers were black. Lynwood Westray, who spent 32 years as a part-time butler in the White House, was part of that tradition.

At the White House, men like Westray worked behind the scenes — but in black neighborhoods outside official Washington, they were pillars of the community.

"The youngsters didn't want to do this kind of work," Westray tells NPR's Michele Norris. "Youngsters, oh, it's beneath them to be out there working at somebody's kitchen and so forth. And then it became so people didn't understand why they were all black. It was a prestige job and they didn't realize it. The butler was an honorable job; it was a good job. And the benefits, they were there."

Even though he dresses informally, Westray still has a quite distinguished air. His pride is evident as he talks about his White House years. He served eight presidents, starting with John F. Kennedy, before leaving the White House in 1994.

"Each administration is different," Westray says. "I've seen everybody who was anybody from all circumstances. Russians, the Chinese, everybody who's coming in there, you saw them."

And in his 32 years, he saw presidents experiencing great joy — and great stress. And he sometimes was witness to some of their final events at the White House.

When reflecting on his fondest memory, Westray talks about a time in 1979 when Queen Elizabeth II and Prince Philip visited the White House. After dinner, Prince Philip went into the Red Room, next to the state dining room. Westray and his buddy were serving liquor. Westray says he was carrying the tray and glasses.

"The prince was in there by himself, which was odd, because everybody else had gone down to the other end of the building," Westray says. "I said, 'Your Majesty, would you care for a cordial?' He says, 'I'll take one if you let me serve it.' What do you do? I didn't do all that because I had the stuff in my hand. And he says, 'If you let me pour it, I'll have one with you.'

"... So he poured it, the one he wanted, and we took the same thing that he had. And we had our drink there together and had a little talk while we were there. He told us if we were ever over there in London to stop at Buckingham Palace and see him. Can you imagine the prince serving you? I enjoyed it. You know, we're not supposed to drink and carry on at that time. We're not guests. It was just the three of us in the room, so nobody knew what happened. And I drank my little cordial, we all drank, and had a little conversation. But that was one thing I'll never forget, having been served by royalty."

Even though he is now retired, Westray says he wouldn't mind working for Obama when he moves into the White House next week.

"A lot of black folks, especially, were wondering if it was ever going to happen," he says. "And here it is happening. And they're tickled to death. I'm surely happy. I wish I was 30 years younger so I would be there ... when he came in. Let's see, I worked for eight presidents. The ninth wouldn't hurt."