Accessibility links
Sunnis Plan To Flex Political Muscle In Iraqi Elections Crucial provincial elections will be taking place in Iraq at the end of January. In many places, it appears as if traditional parties will lose ground to newer groups, and nowhere is that more likely to happen than in Sunni-dominated Anbar province west of Baghdad. 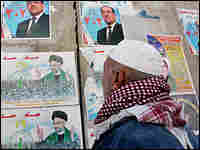 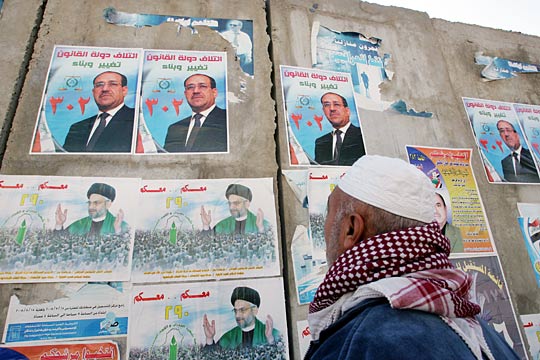 An Iraqi man looks at election posters in central Baghdad, Jan. 5. Provincial elections will take place in 14 of the country's 18 provinces on Jan. 31.

Crucial provincial elections will be taking place in Iraq at the end of January. Across the country, a dizzying 14,400 candidates are vying for 440 seats in 14 of Iraq's 18 provinces.

In many places, it appears as if traditional parties will lose ground to newer groups, and nowhere is that more likely to happen than in Sunni-dominated Anbar province west of Baghdad.

Since the U.S.-led invasion of Iraq in 2003, Iraqi politics has been largely dominated by exiles who returned to this country with American support.

But in this election, especially in the once-violent western province of Anbar, a new homegrown political movement has emerged.

Sheik Aifan al-Issawi is a founding member of one of these groups, the Sahwa, or Awakening, movement. In 2006, he and other tribal leaders turned against al-Qaida in Iraq and joined the Americans.

Now, Anbar is one of the more stable Iraqi provinces — and these fighters want to become a political force in Iraq.

Issawi, head of Fallujah's tribal security force, says he and other tribal fighters have sacrificed more than anyone else. He cites his own personal losses: nine members of his family killed, including his mother and sisters.

The Sunni boycott of the polls in 2005 left them with little representation. This time, the sheik says they are going to flex their electoral muscle.

"We will vote now," he says, adding that Sunnis now understand exactly why they lost power for five years.

One of the only Sunni parties that did participate in the last elections, the Iraqi Islamic Party, or IIP, received a large number of seats in the Anbar provincial council.

Issawi sees the IIP members as his main rivals. He speaks like a seasoned campaigner.

"The IIP steals all the money. They didn't build water stations, schools, factories, nothing. We should build clinics, we should build schools," the candidate says.

Still, Issawi is worried the Sunnis' nascent political power will be undermined by intra-Sunni rivalry.

The Awakening movement itself is fractured, with different tribal sheiks running for office on different lists. Dozens of other Sunni groups are competing here as well.

It's a situation Issawi laments as a "big mistake."

"It will make us weak. We will be good in the future, but we are weak now," he says.

The Anbar city of Fallujah — once the capital of the insurgency and the target of two U.S. offensives in 2004 that left thousands dead and wounded — is much more peaceful these days.

In fact, on Jan. 12, the U.S. Marines formally handed over their base in there, Camp Fallujah, to the Iraqis.

That stability has allowed candidates to actually hit the streets and campaign in Anbar.

Still, with dozens of groups and individuals competing here, many people seem confused.

Majid Abu Ayman, 26, says he is really not sure who any of the candidates are.

"I do not have someone special in mind because I don't know who is running, but we hope all of them are good," he says.

At the same time, there is a sense in Anbar that these elections are important, and many residents spoke of wanting their sect to be represented.

Issawi, for one, is plotting his success in the provincial elections. But the real prize, he says, is the national election slated for the end of the year. That's when a new Iraqi parliament will be voted into office.

He says talks are under way to create a national Sunni list similar to the Shiite list that swept into power in 2005.

"If we unite and we win in the elections, we will control all Iraq," he says.

Despite their minority status, the sheik dreams that one day Sunnis will resume their place at the helm of the country.