Accessibility links
FAA: Major Accidents From Bird Strikes Are Rare Collisions between birds and aircraft are surprisingly common, with more than 56,000 bird strikes recorded in a 14-year period, says the FAA. Major accidents, however, are rare. But aviation authorities say hazards are increasing as more planes take to the sky. 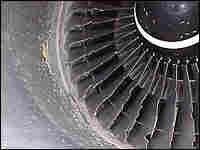 This engine from a KLM Boeing 747 was damaged by a Western gull on Aug. 27, 2000. Pilots were able to safely return the plane to Los Angeles International Airport. FAA Wildlife Hazard Mitigation hide caption 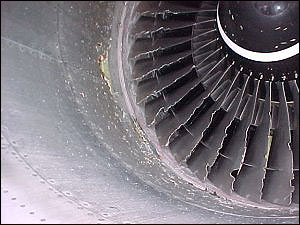 This engine from a KLM Boeing 747 was damaged by a Western gull on Aug. 27, 2000. Pilots were able to safely return the plane to Los Angeles International Airport.

A US Airways plane has crash-landed in the Hudson River, sending passengers fleeing for safety in the frigid waters. Federal Aviation Administration spokeswoman Laura Brown says US Airways Flight 1549 had just taken off from LaGuardia Airport en route to Charlotte, N.C.

Several serious bird strikes have taken place in the past 15 years. Here are some examples, as listed on the Bird Strike Committee's Web site:

June 3, 1995: An Air France Concorde ingested one or two Canada geese into the No. 3 engine when landing at JFK. The engine failed, and shrapnel from the No. 3 engine destroyed the No. 4 engine — and cut several hydraulic lines and control cables. The pilot was able to land the plane safely, but the runway was closed for several hours. Damage to the plane was estimated at over $7 million. The French Aviation Authority sued the Port Authority of New York and New Jersey, and eventually settled out of court for $5.3 million.

Jan. 9, 1998: While climbing through 3,000 feet after takeoff from Houston Intercontinental Airport , a Boeing 727 struck a flock of snow geese, and three to five birds were ingested into one engine. The engine lost all power and was destroyed. The radome was torn from the aircraft, and leading edges of both wings were damaged. The plane experienced intense vibration and loud noise in the cockpit, which increased to the point that communication among crewmembers became difficult. An emergency was declared. The flight returned safely to Houston with major damage to the aircraft.

Sept. 4, 2003: A Fokker 100 struck a flock of at least five Canada geese over the runway shortly after takeoff at LaGuardia, ingesting one or two geese into engine No. 2. Engine vibration occurred, and the pilot was unable to shut down the engine with the fuel cutoff lever. He pulled the fire handle, and the engine finally shut down, but the vibration continued. The flight was diverted to nearby JFK, where a landing was made. The NTSB found a 20x36 inch wide depression on the right side of the nose behind the radome. It was 4 inches deep in parts, and there were impact marks on the right wing. A fan blade separated from the disk and penetrated the fuselage. Several fan blades were deformed and holes were found in the engine cowling. Remains were recovered and identified by Wildlife Services.

Bird strikes to aircraft are surprisingly common. The FAA reports that between 1990 and 2004 more than 56,000 bird strikes to civil aircraft were recorded. And the FAA estimates that these make up only about 20 percent of the number that actually occurred.

Every year, bird and other wildlife strikes to aircraft cause over $600 million in damage to U.S. civil and military aircraft. When a bird strikes an engine, it can damage parts of the mechanisms, like the fan, that make it spin.

Major accidents are not common, but according to the Bird Strike Committee USA, five large jet airliners have had major accidents due to bird strikes since 1975. In one case, about three dozen people were killed.

The committee is made up of civil and military aviation experts. Their research shows that bird strike hazards are increasing, in part because bird populations in North America are growing and more planes are flying. Numbers of geese, in particular, have increased — often frequenting golf courses, parks and airports.

Large commercial aircraft are certified to be able to continue flying after hitting a four-pound bird, even if one engine has to be shut down. But many species of North American birds weigh more than four pounds, and most travel in flocks.

Airports use a variety of methods, including making loud noises, to discourage birds from taking up residence on their grounds. These have had mixed results and don't help with birds that might be flying well outside the vicinity of an airport. Although most strikes do happen close to airports, more than 1,300 strikes involving civil aircraft took place at heights above 5,000 feet. The world record height for a strike is 37,000 feet, according to the Bird Strike Committee.

Bird strikes have been part of aviation from its inception. According to the diaries of the Wright brothers, Orville Wright hit a bird (thought to be a red-winged blackbird) during a flight in 1905.