Accessibility links
Comparsa On Mountain Stage When he was 10, Eduardo Canelon moved from Venezuela to the U.S. In his teens, he began to study the music of his homeland, and has since formed the band Comparsa, dedicated to exploring the music of Latin America and the Caribbean. 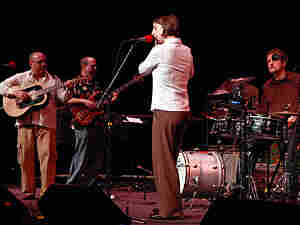 Eduardo Canelon moved to Elkins, W.Va., from Venezuela at the age of 10. By the time he went to college, he'd begun studying the music of his homeland, even taking up the Venezuelan quatro, a four-string cousin of the guitar. He's since formed several Latin and worldbeat bands around Charleston, W.Va., the most enduring of which is Comparsa. The group had just released its first studio effort, the independently released La Nueva Comparsa, when it recorded this appearance on Mountain Stage.

The band's trombone player, Al Peery, was already on his way to another gig when Canelon got the last-minute call to perform on Mountain Stage. But the remainder of the group — including Canelon's wife Elizabeth Segessenman on flute, Deron Sodaro on bass and Mark Davis on timbales — performs two songs: a gypsy take on Willie & Lobo's "Omar's Harem" and Canelon's arrangement of "Pajarillo.