Accessibility links
Robert Glasper: The Inauguration Session Pianist Robert Glasper is an example of the freedom principle at work; walking proof that art is forever the great (small-d) democrat. A soon-to-be father, Glasper says he's excited about the world his child will soon enter, and he describes what Obama's presidency means for jazz. 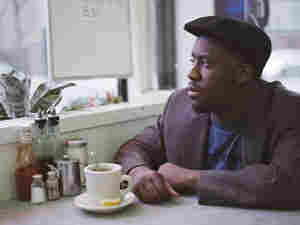 The election of an African-American president may have surprised many, but the jazz community has always been a sect of true believers in the progress of humanity. Many jazz people are quick to posit that this day was never dependent on the conditional "if" clause. It was only a matter of when.

Pianist Robert Glasper is a recent example of the freedom principle at work — a young man who's walking proof that art is forever the great (small-d) democrat. The 30-year-old Houston native is one of the major pianists of his time, with a gift for harmony that evokes the very best in jazz. It's that mysterious feeling that rides tandem with American creative genius, the sense of liberation of the body and soul that, according to John F. Kennedy, "finds its greatest flowering in the free society."

"Half of me is surprised and half of me is not surprised, because it is a new day," Glasper says. "I always knew it was going to happen. The very next day after he was elected president, I went on tour in Europe. I was in Spain, I was in London, I was in France, everywhere. It was like Barack-mania out there. Just to have European countries care and be inspired is amazing. It's not just good for America; it's good for the world."

Born To A Hopeful Future

Forgive Glasper for gushing. After all, he's on the cusp of something far greater than fame. He's about to become a first-time father, likely this week.

"It meant something different to me, too, because he's going to be in office for the next four to eight years," Glasper says. "So it meant that much more to me that my child is going to be born when he's president. I feel that things are going to be better."

The pianist's music is jazz, but his muse comes less from genre than in the overall sensibility of bouncy grooves and flowing creativity. Glasper is a card-carrying member of the hip-hop generation, and he has two bands: an acoustic trio and the plug-and-play Robert Glasper Experiment (or RCDC, for short). He sits comfortably in the null point of old and new, as witnessed in this studio session at WBGO.

Glasper recently completed a recording of both bands for his forthcoming Blue Note release, Double Booked. "No Worries," found here, is a sneak preview of what's ahead.

"I wrote that at our sound check in London, and I played it that night," Glasper says. "I didn't have a name for it, but I remember people in London always saying, "No worries, no worries, no worries.' So when I said, 'Hey guys, I have this song; I don't have a name for it,' someone actually said, 'Oh, no worries.' I play that today because, you know, I feel no worries. I feel a little better about the next four to eight years with Barack in office. It kind of fits."

Glasper says that the new leader of the free world can help involve young people in politics — and in jazz.

"Barack is inspiring a lot of young people, and that's what the jazz genre is missing — young people," Glasper says. "Not only people that play it. We still have young cats that are coming up in college that play it, but we're missing young lovers of the music. So I think he could spotlight some of the younger cats that are doing this. If the music is not seen, how are people going to know about it? I think that would help the music."

Potential young audiences for jazz have a diminishing connection to the meat and potatoes of American Songbook classics that have defined jazz for nearly a century.

The ethos of jazz, however, has always been self-reflexive, and Glasper's arc bends toward the present. Give a listen to the elegant, uncontrived meshing of Radiohead's "Everything in Its Right Place" with pianist Herbie Hancock's definitive jazz classic, "Maiden Voyage."

The final selection from our studio date is the centerpiece of this Inauguration Day Favorite Session. It's a reworking of an original trio composition, "Enoch's Meditation," with a twist. Glasper set his iPod on the piano, and as the trio played, he fired a playlist of three important speeches. The first is a selection from Dr. Martin Luther King Jr.'s famous "We Shall Overcome" speech from Zion Church in 1966. The second is Barack Obama's election-night victory speech. Listen midway through Obama's words, as Glasper begins to play the harmonies of our presidential anthem, "Hail to the Chief." The final audio comes from Dr. Cornel West, echoing the sentiments of Victor Hugo, that music "expresses that which cannot be said and on which it is impossible to be silent."

The beacon of jazz has always flickered to the pulse of its time, and even today, it does not extinguish. The march of progress is slow and steady, but it moves onward.

"Racism is always going to be around. It's never going to be, 'Oh, now that Barack Obama is president, y'all can shut up now," Glasper says. "It doesn't mean stuff isn't still going to happen. It just gives people hope to be able to bypass those things. You know, I've been discriminated against, but I'm not going to let it hold me down. I'm going to continue to do what I do and see you at the top or not. That's how I think of it."

On this Inauguration Day, that's change we can believe in. At the very least, it's the change we need.