Accessibility links
Veterans Turn To Online Strangers For Financial Help Many veterans, especially those who are disabled or wounded, are turning to the Internet to ask strangers to help them make ends meet. A growing number of Web sites are designed to link veterans needing assistance with people who can provide it. 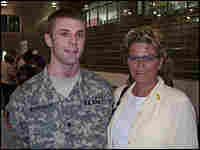 A roadside bomb hit Army Spc. Robert Sprenger's Humvee while he was serving in Iraq. His mother, Vicky, who helped take care of him during his recovery, says she's still suffering financial hardship. Courtesy of Vicky Sprenger hide caption 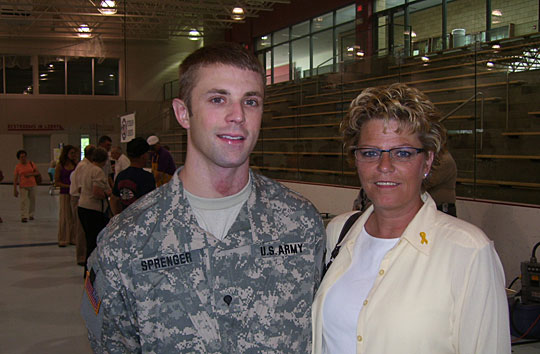 A roadside bomb hit Army Spc. Robert Sprenger's Humvee while he was serving in Iraq. His mother, Vicky, who helped take care of him during his recovery, says she's still suffering financial hardship. 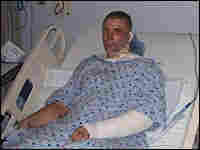 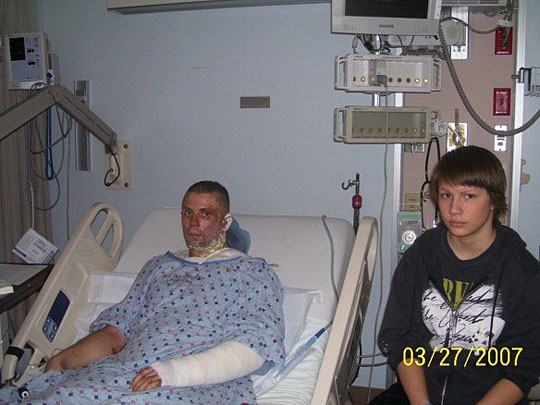 Betty Sprenger visited her brother while he recovered at Brooke Army Medical Center in San Antonio. Burns covered 40 percent of his body.

A few hours after Daniel Zwerdling's story aired on Morning Edition, Vicky and Robert Sprenger received some unexpected good news from the military.

A representative from the military's Traumatic Servicemembers' Group Life Insurance office called Robert and said they decided to increase how much they compensate burn victims and other injured veterans. She said Robert was now entitled to $100,000 — the maximum amount any soldier can receive — so Robert will get an additional $75,000 in the next 10 days.

A military spokesman said that the change was already in the works before the NPR broadcast and that the timing was coincidental.

More On Aid For Veterans

Organizations and other Web resources for veterans seeking financial assistance:

When Robert Sprenger's Humvee blew up in Iraq, the Army specialist was burned black over large swatches of his body.

After the Army transported him to Brooke Army Medical Center in San Antonio, Texas, Sprenger spent months lying in his bed, wrapped in gauze, almost like a mummy.

When he was released, he moved back home with his mother to the farm town of Sleepy Eye, Minn., where they made a troubling discovery.

The government compensated him, but his mother says the money wasn't anywhere near enough to cover his family's expenses. So Sprenger and his family swallowed their pride, as a growing number of veterans have done, and went cyberbegging: They posted their story on a Web site and asked strangers to help.

"That was the most horrible-est thing," says Robert's mother, Vicky Sprenger. But she says they had no choice. "I wouldn't ever cut the Army down for any reason whatsoever," she says. "I just think ... it kind of stinks, you know, that we do have to struggle the way we do."

The Sprengers posted a profile on www.USAtogether.org, one of a new breed of Web sites that help Iraq and Afghanistan veterans. The USAtogether profile includes a small photo of Sprenger in his hospital bed, staring dazed at the camera.

"I was a gunner in a Humvee that was hit by an IED," Sprenger writes in his profile. The roadside bomb left him "burned on 40 percent of my body. One week before my injuries, my sister was diagnosed with bipolar/borderline personality disorder and put in placement. Since then, my mom lost her job. She had taken too much time off from her previous job taking care of me and my sister."

Then Sprenger asks donors for a little help — but not cash. "Our washing machine no longer works," he writes, asking for a new machine.

Sprenger didn't return NPR's phone calls, but he did allow his mother to speak for him.

Stepping In Where Government Hasn't

The government offers a huge range of benefits to disabled vets — such as disability payments, job training and subsidies to buy cars and houses. Veterans advocates say if every vet received all the benefits they're entitled to, they should be able to afford a decent quality of life. But reports have shown that many vets vets don't know about all the benefits, so they don't apply for them.

And the average vet who does apply has to wait at least six months, and sometimes years, to receive them.

Hundreds of private groups try to fill the gap — from the American Legion, founded after World War I, to newer organizations, such as Soldiers' Angels, Fallen Heroes and Community of Veterans.

Advocates hail the nonprofit groups for donating hundreds of millions of dollars worth of goods and services — from toys and clothes for veterans' children to brand-new houses designed for amputees.

Still, an entrepreneur in Silicon Valley, Dave Mahler, perceived a need for a group that helps vets in a slightly different way. Mahler cheerfully acknowledges that he knows nothing about the military. He used to work for the technology company Hewlett-Packard, then he co-founded and sold a software company for a ton of money. About a year ago, he was looking for a new project, and he had an idea on his morning commute.

He drives past a federal Veterans Affairs hospital in Palo Alto, Calif., "and have driven past it almost every day for the last 25 years, and I'd never been on the property," he says.

It suddenly struck Mahler that perhaps he could use his Web skills to help the wounded troops.

As Mahler explains it, most veterans' support groups raise money from the public. Then their leaders — not the donors — decide exactly how to spend the money and who should get the help. Mahler set up USAtogether so a donor can choose an individual vet to support.

For instance, one photo on his Web site shows soldier "Tara H." standing on a prosthetic leg. "I could use any help with one month's mortgage," she writes.

Another posting, by "Michael T.," asks for "food for our family. Our refrigerator unexpectedly died and we lost all our food."

Before they agree to post any veteran's pleas, Mahler and a colleague check the vet's military and medical records and other information to make sure the requests are legitimate.

Vicky Sprenger and her son had barely posted their request when somebody sent them a brand-new washer and dryer from Sears.

Vicky Sprenger has found a job at a local supermarket, working at the deli counter and doing other tasks, but she says she can't afford health insurance and hasn't been able to pay her property taxes for months. She's just sent another appeal to USAtogether.org, hoping that other donors will help her.

Peter Gaytan, the American Legion's director of national veterans affairs, says the proliferation of groups like USAtogether raises a question.

"If the VA is meeting [its] obligations to America's veterans," he asks, "why is there a need for any other nongovernmental organizations or veterans service organizations to provide any level of assistance? If our [federal support] system were ideally able to meet all the needs, then we wouldn't have the need for these organizations springing up."

Privately, one top official at the American Legion says the fact that veterans receive so little compensation from the government and need to go cyberbegging is "pathetic." But, publicly, they echo Gaytan.

"It's heartening to see that the citizens of this country ... care enough to go to a Web site," he says, "to take the time to help returning veterans and their family. I think that's heartening as a country.

Earlier in January, the Veterans Affairs Department announced "a new partnership" to help private organizations assist veterans. The outgoing secretary, James Peake, said he'll appoint a federal employee to help private groups identify the "unmet needs" of veterans and their families. But the VA won't give them more money.