Accessibility links
Losses Shake Citigroup, Bank Of America Citigroup and Bank of America have been losing money at a furious pace. On Friday, Bank of America received an additional $20 billion from the federal government, and Citigroup said it's breaking into two pieces in an effort to contain its own losses. 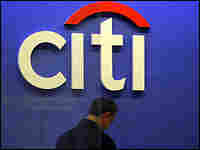 Citigroup is breaking into two in an effort to contain its losses. Emmanuel Dunand/AFP/Getty Images hide caption 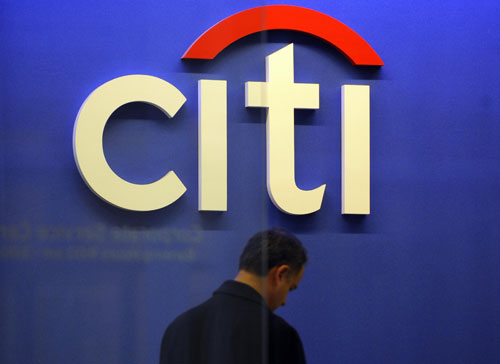 Citigroup is breaking into two in an effort to contain its losses.

Citigroup and Bank of America have been losing money at a furious pace. On Friday, Bank of America received an additional $20 billion from the federal government, and Citigroup said it's breaking into two pieces in an effort to contain its own losses.

The Treasury Department said on Friday that it was providing another $20 billion to Bank of America. The banking titan has been struggling to handle the losses it inherited when it merged with investment bank Merrill Lynch.

Last year, while other banks were collapsing all around it, Bank of America went on a shopping spree. It announced it was acquiring two of the biggest casualties of the mortgage downturn: Countrywide Financial and Merrill Lynch.

And it looked very much like Bank of America would emerge from the carnage in banking stronger and more powerful than ever. Friday, as Chief Executive Officer Ken Lewis spoke to investors, much of the confidence he once conveyed was gone.

"I don't need to tell you what extraordinary times we're experiencing," he said. "The economy and subsequently the credit markets literally hit a wall starting in September and culminating late in December with the greatest impact of my almost 40 years in banking."

The company said it lost money last quarter for the first time since 1991. It also said it was getting $20 billion from the government's Troubled Asset Relief Program in addition to the $25 billion it has already received. It needs the money in part because the writedowns at Merrill Lynch have been so much greater than expected.

Gary Townsend, who runs a hedge fund that invests in financial companies, says that if Bank of America hadn't agreed to buy Merrill last year Merrill might have collapsed, which would have devastated the financial markets. So the Merrill deal made a lot of sense.

"On the other hand, if you're a common shareholder of Bank of America you have taken large paper losses at least, and so there's plenty of reason to be quite unhappy with the leadership of Bank of America," Townsend says.

The fact that Bank of America has had to absorb losses like these has helped erode the already shaky confidence that investors have in U.S. banks right now. And it isn't the only piece of bad news that the markets had to contend with Friday.

Citigroup said it too lost money for the fifth straight quarter during the last three months of the year. It also said it would restructure itself, creating a new division called Citi Holdings where its most troubled assets would be housed. It's an attempt to build a wall around the healthy parts of the company to persuade investors not to give up on Citigroup.

Still, Simon Johnson, an economist and professor at the Massachusetts Institute of Technology, says investors remain deeply worried about banks. Johnson says they're also worried that government support for the sector may be wobbly.

"I think the market is taking the view that unless there's some big new governmental program they're going to face some big significant difficulties," he says. "And I think partly it's because the discussions on Capital Hill make it clear that Congress is a bit fed up with the way the bailout programs have been handled and there's presumably some impending limitation on the amount of money that can be spent to bail out all these banks."

U.S. officials watched Lehman Brothers go under and they understand the ramifications of another big Wall Street collapse, which is why they ultimately agreed to shovel more money Bank of America's way. But with even the best banks losing money, the rebound in banking seems just as elusive as ever.